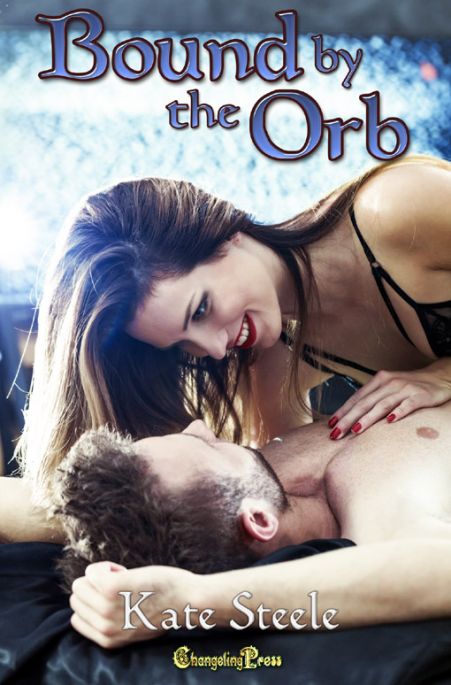 The Orb of Atrios brought them together, but the rest is up to them. If they can face the challenge, two couples will find their way past uncertainty and tears to laughter, joy, and sensual nights filled with soul-shattering sizzle and everlasting love.

Chosen of the Orb: Huntress Lira Senn Var is strong, independent, and a far cry from the domestic type of woman who’s satisfied tending hearth and home. Still, she longs for a mate and children of her own. In Talrion Finn Mal she finds a kindred soul, but can this strong and sensual warrior accept Lira’s need to remain true to herself?

The Orb of Atrios: Swept into another dimension by the Orb, Lealah Redmond struggles to accept her new life as tezza to Darien Finn Mal. That Darien is confident, kind, and sexy as hell takes the sting out of an otherwise bizarre situation, but are the feelings Lea begins to experience her own, or those of the Orb?

or Pre-Order for October 11th at retailers

All rights reserved.
Copyright ©2019 Kate Steele
Excerpt from Chosen of the Orb

Having ridden the cool morning through, Galatin reined his horse in, glancing at the sky. The sun rose high and hot overhead. Sweat ran down his back, the trickle causing an involuntary shiver. Urging his horse forward, he guided him through a flower-bestrewn meadow.

Galatin smiled with pleasure at the sight of a wide, shallow band of clear water running with joyous abandon over a bed of polished stones. He dismounted, leading his horse forward, allowing him to drink. Divesting the stallion of packs, saddle, and bridle, Galatin gave him a gentle swat, urging him into the meadow where he settled to graze.

Hot and fatigued, ripe with the scent of horse and pungent, overheated male, Galatin stripped and stepped into the cool water. He scooped handfuls of the liquid upward, splashing it over his wide shoulders. The glistening liquid cascaded over his well-toned warrior’s body, caressing muscle, sinew, and taut, tanned skin. It trickled in cool meandering paths over each hard bulge and plane, dripping from his well-formed cock and full, low-hanging balls. Splashing a double handful over his head, he ran damp fingers through the silky strands of his dark, shoulder-length hair, scooping it back from his hawk-like face. Satisfied with his bath, he emerged, took up his rolled blanket, and spread it over the thick grass. He stretched out with a contented sigh to dry and bask in the sun.

Galatin drifted in a half doze as warmth seeped into every pore. The sun was a red haze behind his closed lids. A warm breeze set the tall grass whispering around him. The sound of a splash drew his attention. Instantly alert, he directed his gaze to the stream.

A young woman, nude as himself, emerged from the stream to stroll with unearthly grace in his direction. Her form fluidly morphed from untried virgin in the first budding season of womanhood to voluptuous earth mother, seasoned and sensual, filled with the promise of carnal pleasures.

Galatin knew her; he’d studied legends of the lusty Mother Goddess of Atrios. Of its own volition, his cock rose, thick and full.

Halting before him, she sank gracefully to her knees. She reached out, resting her hand over his heart. Their eyes locked. She held out her other hand to reveal a glistening rock, one that had been taken from the streambed. In a voice that echoed with pure power, she spoke.

From far below, warmth seeped upward. Galatin found himself cradled as though the earth itself held him. Heat penetrated his being, flooding him with power as fine, electric vibrations ran through his skin.

The wind increased, blowing haphazardly until, gathered and directed, it began to concentrate and swirl around the rock held steadily in the woman’s hand. A tiny funnel formed, the infinite power of wind gathered in that small shape. It twisted and turned as it sculpted the stone, polishing it to a round, gleaming sphere.

Galatin flinched, fearing flames would burst forth from some unknown source to consume them. The Goddess smiled. “Not that kind of fire, Galatin Dal Wri. Passion. The fire of men.”