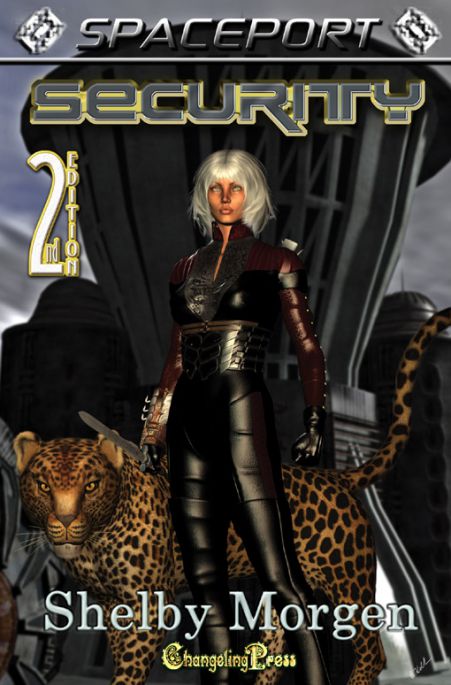 A dark corner of a seedy bar on the edge of nowhere. A woman who’s seen too much. A man who moves through the shadows with the grace of a cat.

She’s on his tail, and he’s determined to find out why. Once he might have been flattered to have her checking out his ass. Now he knows women are dangerous. And far, far too expensive.

But Commander Kala Decoltéir always gets her man, and she wants the space pirate they call Dancer — no matter who — or what — he is. This time, Dancer has no escape.

Publisher’s Note: Spaceport is a multi-author shared universe that does not need to be read in order.

Desk Sergeant December Ramie held out a cup of coffee, which, from both color and experience, Kala knew would be exactly the way she liked it. “Thank you for that observation, Sergeant.” The coffee just might allow her to live through the coming interrogation.

“After an all night karaoke spree in Haze.”

“Boss, how long have we worked together?”

December shook her head. “Gotta love that computer enhanced memory of yours. Five years, Commander. And in that time, how many days have you taken off?”

“I don’t have a family. Bio-genetically engineered soldier, remember?”

“You may be genetically enhanced, but you’re still Human.”

“I’m a cyborg. I require minimal maintenance from bio-engineering. I never miss my scheduled maintenance.”

“Scheduled maintenance. What are you, a freighter? You may be cybernetically enhanced, but you are not an android. You’re a woman. You’re so busy trying to keep this place from falling apart, you’re killing yourself. Look at you. You’re not sleeping, you’re living on caffeine and junk food, and you look like hell. You need some down time, Commander.”

Kala’s ocular implant went fuzzy, and she thumped the side of her head. “This place is falling apart. Been down to the Pits lately? Try a walk-about on Level 26. Make sure you go heavily armed. The best I can do is to try to keep the galactic refuse from overflowing into the public areas. Between Holly Barbaric stirring up trouble wherever she goes and the Dollavera brothers finding ways to exploit every disaster to their financial benefit, I’m expecting a riot any day now. I don’t have time for R and R, Sergeant. I’m trying to keep our little world from ending.”

“Thompson’s perfectly capable of covering for you for a few days, Commander.” Ramie held out a personal vid panel opened to a full color brochure. “You can afford one day off duty for a trip to a day spa. It won’t even take a day. One shift, even.”

Kala barely glanced at the brochure. “Thompson’s a good man, but he’s Human. There’s a reason the Adana Council recruited me for this office. Allied Planet Security is making it hard for honest businessmen to trade within AP space, let alone the not-so-honest ones. All the fringe planets and ports are getting inundated with displaced riff-raff. We’re getting hit harder than most, because we’re the closest port of call to the major trade routes with Old Earth. Things are going to get far, far worse around here before they get any better. If they ever get any better.”

“So you’re just going to push yourself till you fall apart? What will that accomplish?”

Well, it’ll get me out of here, Kala thought, but she didn’t say so out loud. She cataloged Ramie’s list of complaints, looking for an acceptable solution. “What about sex?”

Ramie nearly choked on her coffee. “What about sex?”

“If I promise to get myself laid, will that get you off my back?”

Ramie grinned, cat-like triumph stealing over her face. “I’m not sure sex qualifies as R and R, but it’s a compromise I can live with.”

Belatedly, Kala realized she’d been played. She sighed. She had four times normal Human strength, could calculate any math problem at the speed of a Human computer, and her bio-tech system implant allowed her body to repair itself from otherwise deadly wounds in battle, and yet she’d just been outmaneuvered by a single Human female. Again. “Fine. I’ll set about capturing a suitable male.”

She had the satisfaction of seeing Ramie’s eyes open wide in alarm. “Capturing? Commander, maybe we need to talk about Human mating rituals…”

It was Kala’s turn to grin. “Trust me. I know all I need to know about mating rituals. It’s been a while, but my memory’s good.” She downed her coffee and headed out for rounds, wondering how long it would take Ramie to figure out she’d been kidding.