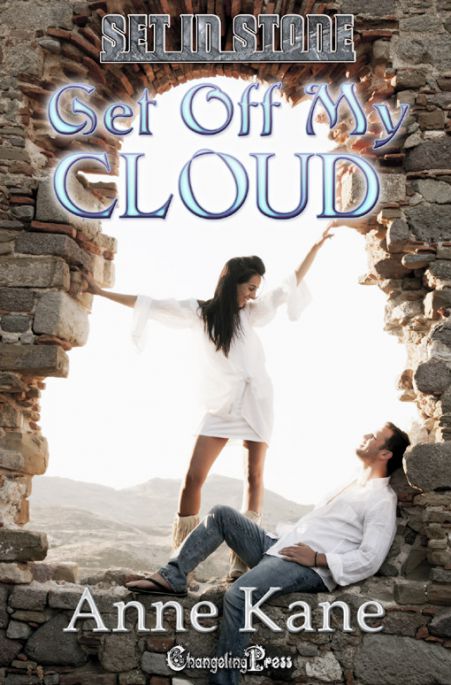 Six months ago, Lucas met the woman of his dreams, but after a night of amazing sex he woke up to find himself alone. Sent to rescue the daughter of a billionaire from her own folly, he discovers her to be the same woman, and this time he intends to make sure she stays put.

When Olivia discovers a herd of live dinosaurs existing on a small island in the South Pacific, she’s ecstatic. This discovery could crown her career as a paleontologist and put to rest the rumors that her daddy bought her position for her! Of course, when her father sends someone to drag her home, she’s not willing to comply and the couple must find a way to deal with the sizzling attraction between them while running from a herd of angry prehistoric beasts.

or pre-order for September 13th at retailers

Praise for Get Off My Cloud (Set in Stone)

“I really enjoyed this story – how it turned the tables on the usual “love ‘em and leave ‘em” style of man. I really enjoyed both Lucas’ and Olivia’s characters. A quick and steamy read, this was a fun short story.”

The voyage had been rougher than Lucas had expected. The fishing trawler he’d rented to get himself from the mainland over to the small island where the target was located had bucked and heaved on the choppy waters, at times threatening to turn itself upside down. Not an ideal ride, but it did the job. He was on the island. Now all he needed to do was locate his employer’s daughter and convince her to leave with him. Grabbing his backpack of supplies, he set out to find her.

Good thing the island was so small. As it was, it was past noon before he caught sight of a battered old canvas tent on the east side of a grassy meadow at the foot of a small hill. He made his way down to the bottom of the hill, cursing the lack of any kind of trail to follow. The low scrub bush that blanketed the area made foot travel slow going. Once he made it to the edge of the flat meadow, he paused to scout out the lay of the land. He wasn’t sure of the best way to approach the woman. She had no idea who he was, and she just might be armed. She would be perfectly justified in defending herself against an unknown male who suddenly showed up unannounced. The last thing he wanted was to engage in a shootout with his employer’s daughter.

Lucas pulled his field glasses out of his backpack and studied the base camp. Two facts immediately slammed into his disbelieving brain. Hard to tell which was more astounding. Firstly, those four-legged creatures stretching up to munch on the tops of the trees definitely did look like dinosaurs.

And secondly, Mr. Billionaire’s daughter was none other than the woman he’d spent one unbelievably fabulous night with almost half a year ago. The woman who’d seduced him, fucked him gloriously senseless and then disappeared before he managed to regain consciousness the following morning.

Hell, he’d started to think he’d dreamed the whole thing. No woman could be that gorgeously curvy, that amazingly good in bed, and then just leave without expecting anything at all from him. He hadn’t even taken her out for dinner. Or breakfast. Not that he was cynical or anything but women were expensive. They didn’t do anything without expecting some kind of payback, and they sure as hell didn’t do all the things she’d done for him and with him and to him without very high expectations.

So when she’d disappeared without a trace, he’d been speechless. Speechless and, if he were honest with himself, just a tiny bit bereft.

He’d wanted more. More of her. More of them together. Taking a deep breath, he strode across the field toward the woman who’d starred in all of his X-rated dreams for the past six months.

He could tell the exact moment she became aware of his presence. Her head came up like a deer who’d suddenly scented a predator. She turned in his direction, and her lips formed a surprised “o.”

Yeah. She remembered him all right. It was in her eyes, in the way the pink tip of her tongue darted out to wet her lips, in the way her nostrils flared as if breathing itself had become an issue.

Her lips curved upward in that slow, sexy smile he remembered so well, and it sent a bolt of heat straight to his groin. Instant hard-on. Yeah. That was her, all right. Olivia. New-age hippie. The first woman to ever love him all night and leave him wanting more the next morning.

He was close enough now to look right into her eyes, to see the warmth there, the genuine happiness at seeing him again. He didn’t get it. She looked thrilled to see him now, so why had she left that morning without so much as a fleeting message, or a goodbye kiss?

More from Anne at Changeling Press …

Anne is a gorgeous supermodel who writes romance in her spare time while jetting around Europe with a string of boy-toys in tow.

Hmmm… no one is going to believe that. How about this?

Anne is an undercover agent for a super secret government agency and when not saving the world for democracy and all the good people, she writes romance one-handed on a special mini computer designed by a mad scientist just for her.

Yeah, that sounds way better. So, ignore the people who tell you she’s just an ordinary person with an extraordinary imagination. They’re just jealous because she gets to play with James Bond and vacation in exotic locations.

When she’s not busy saving the world or writing the next great novel, she likes to kayak, hike, ride motorcycles, swim, skate, practice karate, play her guitar, sing and of course, read.