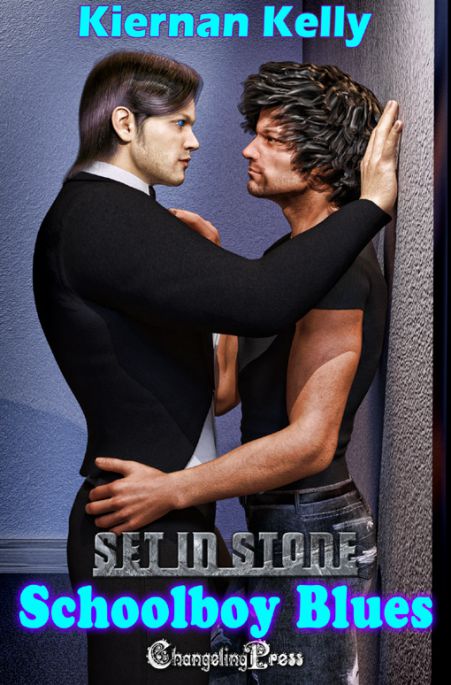 Once best friends, Angelo and Vincent parted after a night of hot passion and conflicting emotions.

Rock star Angelo knows a good thing when he’s got it, and what he has on stage with his band now is as good as it gets. He clings to that knowledge during the times when he longs for the warmth of a lover in his heart and his bed.

Vincent has grown adept at ducking his mother’s probing questions about grandbabies, while dedicating his life to nailing perps to the jailhouse wall in criminal court. His family and his career bring him satisfaction, but he dares not pursue a relationship that would complete his life.

Could the music that led to their parting a decade ago be the bond that brings these two lovers back together again?

or Pre-Order for August 23rd

“If you like rock stars and tough prosecutors who share a weak spot for each other, if you enjoy the “magic” of the 1970s, and if you’re looking for a read that is as short as it is hot, occasionally funny, and just a little suspenseful toward the end, then you will probably like this novella.”

Rush groaned, and banged his phone against his forehead a few times in frustration. It would leave a mark, but he didn’t care. Stage makeup was very forgiving. “Fine. We’ll do it, but no interviews. Nobody backstage. No VIPs, no reporters, no fans, nada. I mean it, Bernie. If I hear one fucking question or see one camera, I’ll walk. Understand?”

Bernie’s voice dropped an octave. “Sure, sure. Excellent. I knew you’d see reason. Okay. You fly out on the third, and I’ve booked the band the top floor at the Marriott. The rest of the company will be staying at a Quality Inn. I’ve rented a bus for them, and a limo for you guys. Two shows, Friday and Saturday nights. Any special requests for the hotel rooms or the green room at the Palace?”

“Not from me. Ask the boys what they want.” Rush was done, and just wanted to hang up and go strum his guitar for a while. That always calmed him down, let him think. If he was lucky, the music would flush the sliminess of Bernie’s voice from his ears.

“You got it. It’s going to be an awesome weekend. Ciao.”

Rush hung up without saying good bye. Ciao. As far as Rush knew, Bernie couldn’t even spell ciao. In Bernie’s little pointy head, it was probably spelled “chow.” Bernie didn’t like Italian food, and the closest he’d ever gotten to Italy was when the band dragged his ass to the San Gennaro Feast in Little Italy in New York last September. Pretentious bastard.

He grabbed Cleaver, his acoustic guitar, and flopped on to the sofa in the living room. Cleaver was a sweet maple Gibson he’d bought back in 1962 when he was still in high school, and paid for it with the money he’d made working a paper route. He remembered the first time he saw it hanging in one of the windows at the Woolworths on Main Avenue in Passaic. He thought then it was the most beautiful thing he’d ever seen, and still did. Even though he wailed on a Fender onstage, the axe never felt as good in his hands as good ol’ Cleaver did.

There were a lifetime of memories scarring the neck and body. Every nick and scratch had a story to tell. Like the little ding next to the bridge, for example. He remembered exactly how and when it’d been put there — by a carelessly tossed shoe on the night he lost his virginity to Vincenzo Genovese.

A smile lifted his lips even now, as he ran his finger over the dimple in the otherwise smooth wood. God, they’d been so young, their bodies so hard and eager. It’d been over almost as soon as it began, but he could still almost feel the sharpness of his orgasm, how it had ripped through his body like white lightning, searing every part of him. His cock stirred as the old, aching need surfaced again.

And deflated just as quickly as the other memory he associated with Vinnie Genovese surfaced. He rubbed his jaw as if he could still feel Vinnie’s hard fist connecting with it, loosening two teeth.

You were both seventeen, and confused about who you were and what you were feeling. Him more than you. How long are you gonna hold on to that grudge?

Shut up, he told the needling voice in his head. He didn’t want introspection right now. He wanted escape.

Trying to push the negative feelings away, his fingers began to strum the strings. It took several moments before he realized he recognized the tune, although he hadn’t played it in years. It was Schoolboy Blues, the song he’d written for Vinnie. The lyrics came back to him with the melody, and he began to sing, low and sweet.

“Your hands play my body like I play my guitar, drawing out a melody my heart sings; no matter where we are, near or far, I will always love the magic loving you brings.”

He stopped playing, silencing the guitar by pressing his palm over the strings, and ended the song with a wry snort. The lyrics were amateurish, syrupy high school crap, sure, but they still made his throat tighten and brought a curious burning to his eyes.

“Fuck you, Bernie. Why Jersey? Why now?”

More from Kiernan at Changeling Press …

Kiernan’s stories of gay romance envelop diverse themes ranging from paranormal to fantasy, and science fiction to contemporary romance. She has fifteen novels currently in print and ebook, and over eighty shorter works available in both mediums. Contrary to popular opinion, she is not a zombie. Yet.

You can find Kiernan on her website at http://www.kiernankelly.com/ or on Facebook or at Cafe Risque http://caferisque.blogspot.com, or you can e-mail the author.