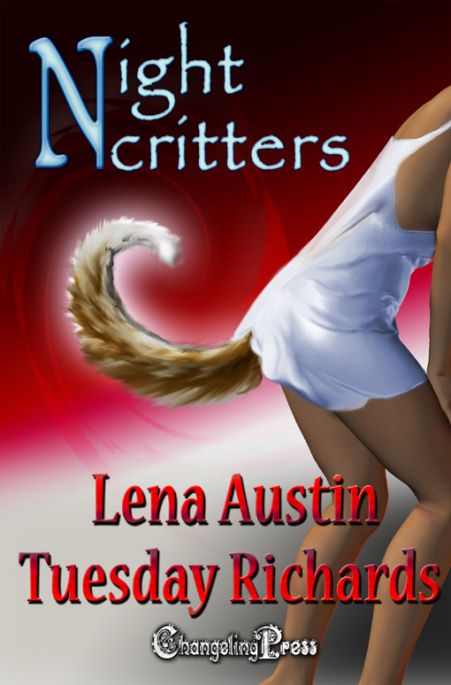 Must Love Dogs: By the mid 21st century, the human population has been decimated, but some still scream over racial purity — and not just among humans. Not only is Roni not a pure werewolf, she’s a crossbreed Chuskie — offspring of a Siberian Husky and a Chihuahua. Corbin is Alpha and heir to Thornburn pack, the richest pack in three states. Who cares if he dates a were-dog? Their parents…

Faux Paws: Lucky Thornburn, a Faux Paws, a shifter-born who can’t shift, meets a fiery Goth half-angel named Charm who’s trouble on the wing. She wants to renovate her mother’s old house into a home for foster children, but Lucky’s cold-hearted brother JR wants the property for a shopping mall. Charm’s not going to give up, and Lucky’s coming right along with her…

Paws to Heal: Two were-dogs welcome the return of their former lover after being enemy packs for so long. Duke, Katriena, and Eduardo must pause to heal the breach and bring the were-canines and lupines together.

Bad Fur Day: Staci Thornburn is determined to get an interview with the new Chinese UNESCO Ambassador, but Jiao Long, a Foo Dog-Dragon cross, is more than a little irritated. It’s a good thing dragons are fireproof, because things are about to get hot!

Santa Paws: JR Thornton seeks redemption by dressing up in a Santa suit to deliver gifts to an orphanage, but the angry wood fairy guarding the house is more interested in blowing his head off. Phaedra’s determined to give JR a piece of her mind. So why does she want so badly to sit in Santa’s lap?

Praise for Must Love Dogs “Lena Austin and Tuesday Richards have created a humorous canine version of Romeo & Juliet… The chemistry was perfectly blended; the characters were strong and overall helped create a marvelously written book.”

5 Angels! — NeNe, Fallen Angels Reviews
Praise for Faux Paws “Lena Austin and Tuesday Richards have produced another hilarious tale pairing unique critters together in a very enjoyable saga.”
4.5 Nymphs! — Chocolate Minx, Literary Nymphs
Praise for Paws to Heal “Paws to Heal is a glimpse into the history of the characters featured in the first book in the Night Critters series. In this installment, the fabulous Lena Austin delivers an erotic love scene hot enough to give you a Heat Stroke.”
5 Nymphs! — Chocolate Minx, Literary Nymphs
Praise for Bad Fur Day “The sex is good but the story was even better. You can always count on Austin and Richards for some “get me some iced tea, I’m on fire” sensuality.”
4 Tombstones! — Kate, Bitten by Books
Praise for Santa Paws “Lena Austin brings to life these two characters in her short story Santa Paws. Bringing Christmas to the readers and showing them that just about every evil deed can be turned to good, given the right incentive. Many readers will enjoy this short story that shows just what Christmas can be all about, at least to the magical creatures of the world.”
— Stacy Link, PNR Reviews