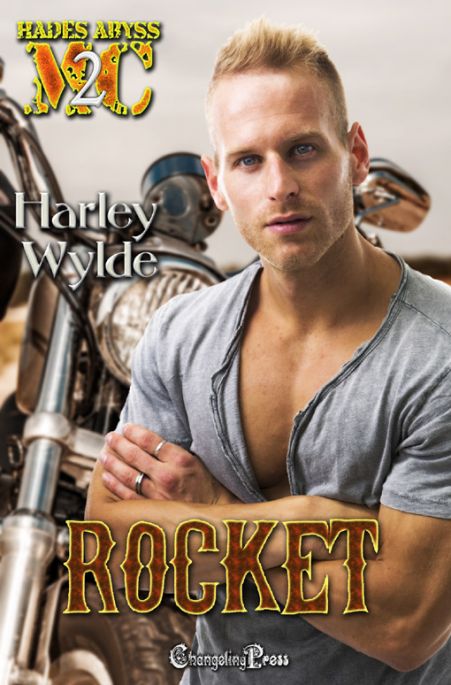 Violeta — It’s been a year since I was brought to the US and given to Rocket. I’d thought he was like the others and would only cause me pain. I was wrong. Rocket is the kindest, sweetest man I’ve ever met. I arrived an abused, pregnant teen. Now I’m a more confident woman, and I have Rocket to thank. Falling in love with him was inevitable, but now I need him to see me as a desirable woman and not a girl who needs his protection.

Rocket — The young girl who came to live with me was more broken than I’d realized. The horrors she faced have made her stronger, but it didn’t happen overnight. It’s hard not to watch her, to want her. I shouldn’t. I’m too damn old for an eighteen-year-old woman. She’s not as fragile, physically and emotionally, but I can’t shut off the protector inside me that wants to shelter her and keep her safe. When she’s taken, I know that the men responsible will die. I only hope that side of me doesn’t scare my sweet Vi, but nothing will stop me from spilling their blood. I just don’t know if we can end the war before it starts, or if this will only be the beginning. I’ll keep her safe, no matter the cost, because she’s mine whether she knows it or not.

WARNING: This book contains violence, strong language, explicit sex scenes, and an abused woman. But it also has a biker who will protect the woman he loves, no cheating, and a guaranteed happily-ever-after.

“This is such a great book. I love it! Violeta has blossomed… Rocket is perfect for her. He worships her, and that’s just what she needs. I love interconnected series like Miss Wylde writes, it makes the books even better to me. There are also quite a few little nuggets about a character whose story has yet to be told. I could have read at least 25 more chapters.”

My hands trembled and my stomach felt like it was flipping and knotting up all at the same time. It was no secret my father didn’t love me, but I’d never dreamed he’d ship me off to a new country. Even though my sisters had been given away as well, our middle sister, Sofia, wouldn’t be with us. She’d been given to a different group of men, and I worried what would happen to her. Our life had been far from easy, but at least we’d always had each other.

I fought not to look at Luciana as I descended the steps of the jet. She couldn’t protect me, never could. But as the eldest, she’d always done her best to watch over us, and we’d looked up to her. Nothing could save us from our father or his men, but since we’d lost our mother when we were younger, it had made us all closer. I could hear her coming down the steps of the plane and I hastened closer to the group of men who would now decide my fate.

“You’re going to stay with Rocket,” an older man said. The writing on his black leather vest said Spider — President Hades Abyss MC. I’d heard that Luciana was to go with this man, and I hoped he’d be kind to her, but there was a resentment in his eyes that didn’t bode well for any of us.

My heart hammered in my chest as a tall, blond man lumbered toward me. It took every bit of strength I had not to turn around and run. As his hand closed over my arm, I took a breath to steady my nerves. I could do this. It was just like all the other times. Being in a different country didn’t matter. Though his grip was firm, it wasn’t overly tight and he wasn’t hurting me. Already that was progress over the men I’d known in my past.

The blond man looked confused a moment, shared a look with the man called Spider, then gave my arm a slight tug. I followed him to a motorcycle that was all black and chrome. I didn’t know anything about them, nor did I know how to sit on one. He huffed, sounding exasperated, then lifted me and settled me on the seat. His hands pressed against my waist sent a strange feeling through me and my gaze jerked to his face, but he seemed oblivious to whatever I’d just felt.

Rocket climbed on in front of me and when I didn’t move, he gave a soft growl before reaching back and gripping my hands, then placed them on the leather of his vest. I let my hands settle there, lightly, not really understanding.

I didn’t know where we were going, didn’t really understand what was happening. I only knew the man called Casper VanHorne had brokered some sort of deal between my father and the bikers, and I’d only gleaned that from what little I’d heard discussed between the two men. My father had told us to do as we were told and not anger the men. Each of us knew exactly what that meant. We were to be his perfect little whores or suffer the consequences. A numbness filled me and I knew that I would never escape my fate.

A large gate slid open and Rocket pulled through, taking the bike down the road past homes. I wondered if it was similar to the compound my father had, just a more rustic version. In Colombia, we were protected by high brick walls and lots of armed guards. My father’s home was a mansion, easily big enough to house several families. Here I just saw miles of chain-link fencing with that sharp wire on top of it and modest homes.

Rocket came to a stop in the carport next to a small house. It was cute, and under other circumstances, I might have been enchanted by it. Instead, I knew what waited inside for me. The same abuse I’d suffered for years. I got off the bike, my legs unsteady, and I wobbled a moment. Rocket shut off the machine before standing. He gave a slight nod of his head for me to follow him. I tried to calm the rioting swarm of angry wasps in my stomach as I stepped through the front door of my new home.

I didn’t know how long I’d remain with Rocket. I’d seen quite a few bikes at the airstrip, and there were even more homes here. How long before he passed me to someone else? My father had made sure I understood none of these men had women in their lives. It was up to me and Luciana to keep them satisfied, no matter what they wanted from us.

The door shutting made me feel as if I were being sealed in a tomb. My fingers trembled as I worked the buttons on my top and then shrugged it off. The atmosphere seemed to change, and I looked over my shoulder to see Rocket frozen in place, his eyes comically wide.

“What are you doing?” he asked.

I reached for the clasp on my bra and as the scrap of cotton fell to the floor, Rocket made a strange noise and bolted from the room. I blinked and stared, not sure what had just happened. I finished undressing and went after him, thinking that maybe I’d messed up and I was supposed to wait until we were in a different room. The door at the end of the hall was closed and when I tried to turn the knob, it wouldn’t budge.

“Did I do it wrong? Was I supposed to wait until we were somewhere else?” I asked through the door.

Panic started to well inside me. I’d already messed up. I’d upset him, and now I’d have to pay. A whimper escaped my lips as I sank to the floor, wrapping my arms around my legs. I rocked back and forth, terrified over what I’d be forced to endure to make amends. White noise filled my ears and my vision tunneled until all I could see were scenes from my past. My father’s men and the things they’d done to me.

Hands gripped my arms and I screamed, but I’d learned the hard way not to fight. I hung limp, unseeing, and lost in the past. Words were murmured in my ear, but I couldn’t make sense of them. My back landed against cool sheets, and then a blanket was drawn over me. A large hand smoothed my hair from my face and I blinked rapidly.

The past faded and I saw Rocket leaning over me, concern etched on his features. “Easy, Violeta. No one will hurt you.”

“I’m sorry. I’m sorry.” I couldn’t stop the words, repeating them over and over, hoping he’d forgive this one transgression.

Rocket backed away and then left the room. I waited, wondering if he would bring something back, one of those prods my father’s men used to shock me, or something worse. Instead, he set my clothes on the dresser and stepped into the hall. He pointed at the door and the doorframe.

“This is your space. Yours and only yours. No one is permitted in this room without your permission, including me,” he said. “You’re safe, Violeta.”

Safe? There was no such thing as safe. I was certain he was playing a trick on me, lulling me into a false sense of security so that it would be more traumatic when he showed his true colors. I wouldn’t be fooled. Not again.

Rocket stared at me a moment before muttering a curse and stomping off down the hall. I heard the front door open and slam shut, my body tense and waiting for whatever would come next. I waited for what felt like forever, but he didn’t return.

Eventually, I curled onto my side and let the tears fall. I hadn’t cried in so long. Tears had never solved anything. My chest ached and my throat hurt by the time I’d shed my last tear. I didn’t know what to make of this strange new life, or the man I now belonged to. Nothing made sense anymore.

Whatever I’d done to upset him, I’d fix it. I had to. It was no longer just me that I had to worry about. I placed a hand over my belly.

“I’ll keep you safe,” I promised the child growing there. I only hoped I wasn’t lying to the both of us.

More from Harley at Changeling Press …

Harley Wylde is the “wilder” side of award-winning author Jessica Coulter Smith. Visit Jessica’s website at jessicacoultersmith.com or Harley’s website at harleywylde.com.  Want to be notified of new releases or special discounts? Sign up for her newsletter!