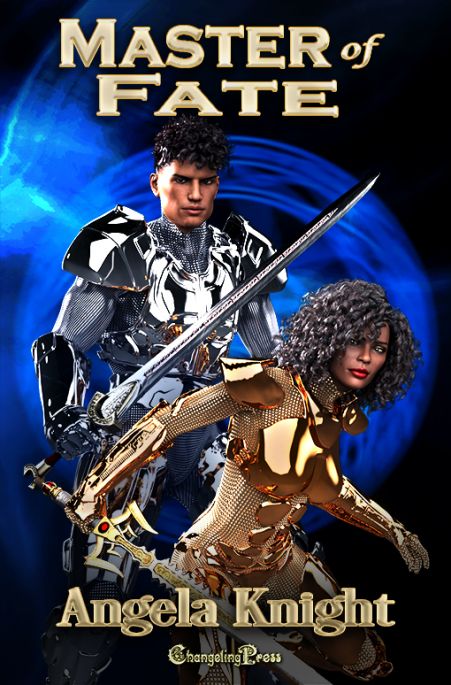 Davon Fredericks is on a self-appointed mission to keep Mad Alys sane. And that job’s never been harder.

Alys Hawkwood is the most powerful seer among the witches of the Magekind. She’s seen a lot of horrors in her visions, but this is the worst: the destruction of the Magekind. The only way to prevent the deaths of everyone she cares about is to allow their worst enemy to kidnap her. Her only hope of rescue is her vampire partner, Davon — the man she loves — and the one she can never have.

To carry out her plan and save them all, Davon must pull off the impossible: take on a dragon and countless alien enemies alone. But his most deadly opponent is Alys herself…

Davon Fredericks watched the rich crimson liquid swirl in the cut crystal glass as he rotated his wrist. The roots of his fangs ached.

His gaze slid over to her as she sat next to him on the dark tufted leather of the couch, watching Netflix on an enchanted tablet. Alys looked barely twenty — quite a trick for someone born when Shakespeare was writing Hamlet.

Twelve years ago, if someone had told Davon he’d be partners with an Elizabethan, he’d have put that idiot on a psych hold. He’d considered himself a thoroughly rational man, a believer in science and logic. He’d had to be. He was a twenty-first century African American trauma surgeon in Chicago, a city where it wasn’t easy to be either black or a doctor. He hadn’t had time for woo-woo crap — until a witch offered him the chance to become a vampire and save humanity.

Now here he was, immortal partner to another beautiful witch.

And Alys was beautiful.

Her skin was a couple of shades lighter than his own deep bronze, since she was the daughter of an African vampire father and a Caucasian witch. Her lean, muscled body was a product of centuries of fighting for the survival of humanity — and a tendency to forget to eat unless Davon nagged her.

A riot of gleaming midnight curls sprang from her elegant head, framing a delicate, angular face. Huge eyes of a deep cinnamon brown balanced the swoop of her wide nose and the lush curve of her mouth. Soft, vulnerable lips parted as she laughed at something on her screen, showing the white edges of her teeth.

God, Davon hungered for that mouth. He’d wanted to kiss her the first time he met her, and he still wanted it ten years later. And he wanted to taste a lot more than her mouth, starting with the smooth length of those golden thighs, only partially concealed by a tiny pair of yellow shorts. A matching silk shirt bloused over her pretty breasts, drawing his attention to the hard nipples tenting the thin fabric.

Davon’s fangs gave another throbbing pulse as his cock hardened. Yeah, no.
He dragged his gaze away by sheer force of will, focusing his attention on the oak wainscoting that ran around the house’s library. That section of paneling was intricately carved with magical symbols designed to amplify Alys’s magic. Though they’d shared the big Tudor-style mansion for ten years, he was still finding new flourishes in the decor.

Whenever Alys felt anxious, she conjured something beautiful. The unicorn tapestry that covered one of the library walls had appeared following the last battle with King Bres. Davon’s near death at the hands of a troll had resulted in a stained-glass portrait of Merlin. He suspected every statue, rug, and carved ceiling beam in the house owed its existence to post-battle anxiety.

The whole place was the three-dimensional equivalent of Pinterest page therapy — lovely, whimsical — and ever so slightly OCD.

Aaand his erection had finally deflated, thank God. He blew out a breath in relief. He and Alys didn’t have that kind of fuckbuddy partnership. Damn it.

Alys looked up, intelligence burning like a flame in cinnamon eyes. “The Fomorians have gone quiet. I have a feeling he’s up to som…” Her voice trailed off.

What looked like a wave of ink flooded Alys’s sclera and irises, drowning her eyes in black. Points of light burst against the darkness, stars igniting in the eternal night. Oh, hell. She was having a vision.

Though his heart had begun to pound, Davon didn’t move, didn’t do anything to interrupt. Alys was the most powerful seer among the Magekind’s witches. They all got flashes of the future, but no one else saw as clearly. More importantly, she could often predict how to avoid a horrific future, a talent not even Morgana Le Fay had.

So no, you didn’t interrupt one of Alys’s visions.

Not that what she learned was always welcome. Sometimes preventing one ugly future would trigger something even worse, so they couldn’t do a damn thing.

Which didn’t do a lot for her mental state. There was a reason they called her Mad Alys. Davon’s mission in life was making sure that shitty nickname didn’t become a reality.

He watched her expression, trying to determine whether this one was going to be another one of those situations. At least there were no flickers of terror and despair on her face, though the tightening line of her jaw suggested growing anger.

A kid must be involved in this. Nothing pissed Alys off like some asshole hurting a child. Often the asshole in question ended up very, very dead by the time she and Davon finished teaching him the error of his ways.

The blackness drained from Alys’s eyes as if someone had pulled a stopper in her skull, revealing her normal irises. She blinked at him, her gaze a little confused.

The vague air vanished as her eyes snapped into focus. “We’ve got a mission.” Surging off the couch as if she’d been launched from a catapult, the Maja flung her arms wide.

More from Angela at Changeling Press…