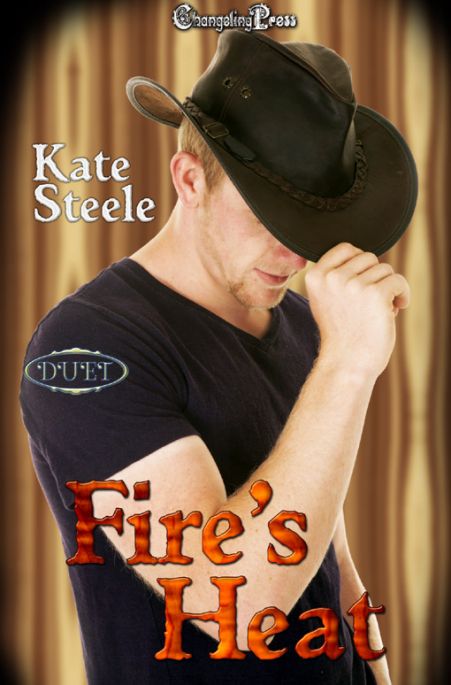 Who knew love could be so dangerous?

A Sure-Fire Cure: Betrayed by a former lover, veterinarian Dean Conlon knows how dangerous love can be. But his attraction to the handsome horse breeder, Scott Whittaker, is immediate and undeniable.

While Dean struggles against his own fears, Scott wages a tempting campaign of seduction. But someone else is in love with Dean and they’ll do whatever it takes, including murder, to claim Dean for their own.

New Year’s Fire: Unless Dean finds a way to mend the breach between his lover and himself, the start of their New Year is going to be anything but happy. Dean hopes to stir the banked embers of their passion and set this New Year’s Eve on fire.

Dean woke to a thumping reverberation in his head. Groggily he sat up. A split second of confusion gave way to understanding when he realized he was hearing pounding at the front door instead of suffering some strange, mutant headache. Grabbing his jeans from the chair near the bed where he’d dropped them earlier, he pulled them on, not bothering with briefs. He buttoned a few of the lower buttons while stumbling to the entrance in the dark.

Switching on the living room lights, he unlocked and opened the door to find a tall, broad-shouldered man waiting. Piercing blue eyes captured his from a ruggedly handsome and tanned face that was framed by thick, wavy and swept back sun-bleached hair.

“Doctor Conlon?” The stranger’s voice was firm, deep and demanding.

“I’ve got a mare that needs attention. She’s about to drop her first foal, but she’s having trouble.”

“Why didn’t you just call?”

Dean was pinned by that brilliant blue-eyed gaze. “I wasn’t taking the chance that you might put me off. This mare’s valuable, Doc. I don’t want to lose her or the foal.”

“I never ignore calls for help,” Dean answered pointedly. “Let me get the rest of my clothes.” He strode back to the bedroom, quickly finished dressing, then returned to the living room to snatch his car keys out of the ashtray resting on a small side table.

Dean glared at the man. “You’ll have to bring me home.”

He saw the determination that sparkled in the man’s eyes and nodded. Wordlessly, he grabbed his medical bag and the pair of boots waiting near it. “Let’s go.”

Following the man out, he secured his door and pocketed his keys. In front of the house stood a fairly new truck, dark and shiny in the glare of the outside light. Dean walked around to the passenger side, climbed in and buckled his seat belt after settling his boots and bag on the floor. He leaned back, closing his eyes. His driver, already in place, started the truck and took off.

Dean took a deep breath, willing his nerves and stomach to calm down. It was disconcerting even under the best of circumstances to be pulled unceremoniously from a sound sleep; his head spun with the tiniest bit of disorientation that always seemed to cling for a few minutes whenever he was abruptly awakened. His body needed time to adjust.

Opening his eyes, his gaze was pulled to the motion of the driver’s hands on the steering wheel. In the glow of the dash lights, Dean watched every move. The hands were large and sinewy, the fingers long, broad and tapered; they looked strong and capable. Dean had a fleeting flash of his dream and felt his belly tighten while a tingle threaded its way down the length of his cock. For one unguarded, sleep-befuddled moment he wondered what it would be like to have those hands gliding over his skin.

He came to with a snap and took himself firmly to task. Dean suddenly realized that he had no idea in whose company he was, or where they were going. Clearing his throat, he managed to rasp out his question. “By the way, who are you?”

“Scott Whittaker. I live about five miles from here, on Westover Road. Don’t know if you’ve been by the place, but I’ve got a few acres and some horses.”

Dean stared. A few acres and some horses? The Whittaker place was large, to say the least. He had no idea exactly how big the spread was, but it was more than just a few acres. The property had rolling hills and flat pasture, all neatly fenced and well groomed. The Whittaker appaloosas were some of the most well known and sought after of the breed, both in the U. S. and abroad. When Dean had bought his veterinary practice from old Dr. Dennison a few months ago, he had read the files left behind, including the Whittaker’s. He had wondered if he’d hear from them, or if they’d take their business elsewhere.

“I’ve been by your place, Mr. Whittaker. You’ve got some beautiful acreage, and from what I’ve seen, some fine-looking horses.”

“I’m pleased to meet you, Scott. You can call me Dean or Doc, I’ll answer to either one.”

The rich, low rumble of Scott’s voice traveled over Dean’s nerve endings and made his stomach do another twist. He took a deep, calming breath, only to find it flavored by a subtle scent that intrigued and tickled his nostrils. It was a full-bodied aroma that wove its way into Dean’s nostrils, wafting in to tickle his palate. It smelled faintly of horse, but mostly of man. There was warmth to it and a teasing, almost spicy musk that caused his groin to tighten yet again.

More from Kate at Changeling Press…