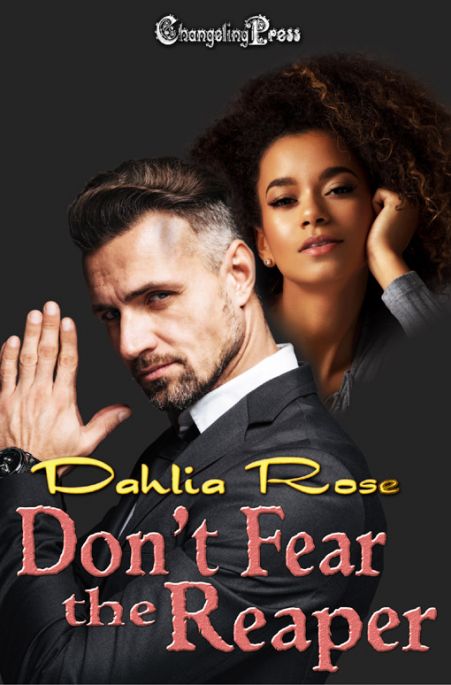 Calliope thought she knew death. She sees it every day in her job and feels it around her. Who knew when she called to that presence it would appear in the form of Arius?

The connection they make is almost instantaneous. She kisses him on impulse, but she falls in love with him because that’s how her heart works. Teaching a reaper about life might seem strange to others, but Calliope accepts the responsibility willingly. But at the end of their time, he will leave, and Calliope will be forever changed.

Arius’s destiny is to take the scythe of his father and become the Angel of Death. But the woman who can feel his presence piques his interest, and he gives in to curiosity. He thought he knew his purpose — that he was created to be a caretaker of the souls who cross over, and nothing more.

Being with Calliope changes everything and tips his world on its axis. Now he questions his destiny, especially when he longs to be with her. The short time they have together might not be enough, for when the bell tolls, the new Angel of Death must answer.

Calliope slept well knowing that she helped others on their journey, and she’d found her calling in life. She was intuitive, one of the gifts she’d honed growing up. She had gifts for empathy and healing, but nothing she knew could save her patients. When Calliope was at home, she knew in this world she was very alone.

But lately, she’d sensed something more, a change in the ether when one of her patients passed. There was a presence in the room, one she’d never felt before. It didn’t scare her. Far from it — Calliope was more curious than anything else.

That was, until she felt that same presence at her home. Now she was almost hesitant to open the door of her little flourmill house in McAddenville, Georgia. Usually when she got home she would eat and watch some television before taking care of her online class work. It was her way to de-stress and think about something other than death — and at night, she would sleep deeply until her sixth sense prodded her awake. That was when she knew something watched her in her house. Sage didn’t help, and neither did crystals at the door. None of the methods her aunt had taught her to keep her home cleansed did anything.

Either way, she followed her routine — shower, food, TV while her laptop sat in her lap — and tried not to think. Finally, the nightshift buzz wore down and she yawned. After setting things aside, she went to her bedroom and made sure no light would come through the shades. Thank God I’m off for the next two days, she thought as she climbed under her soft covers. Her weighted blanket was like a secure hug that made her feel comforted. From the time her head hit the pillow, Calliope was asleep.

And just like clockwork, a few hours later, her eyes popped open, sleep instantly gone. The presence was there. She could feel it ripple through the ether of the room. The air was thick with it, even as her central air ran silently.

Enough is enough, Calliope thought angrily, and she sat up in bed. “Show yourself. Why are you here?”

Silence. But still she felt it. Calliope closed her eyes, opened her senses and reached out. The quiet only irritated her more. Her sleep pattern was being affected and by God, she would have her answers.

“I feel you,” Calliope said as gently as possible as she got out of bed, hoping the new tactic would lead to results. “I don’t want to harm you. I just need to know why you’re here in my house.”

Calliope stomped her foot. “Answer me right now or I swear to all that is holy that I will get a herd of priests in here to exorcise your ass.”

Out of the corner of her eye, she saw movement. The dimness of the room didn’t matter. It was there, close to the window. The air seemed to shimmer and fold in soft waves while Calliope held her breath. Did she really want to see what would appear in her bedroom? Her mind screamed run, but her feet wouldn’t move. She saw a body form from the feet to the shoulders, slowly. Calliope moved away and the backs of her knees hit the footboard of her bed. There was a head now and, hell, trying to run wasn’t an option for something that could appear at will. Instead, she scrambled back into bed until her back slammed against the headboard.

A man stood by her doorway now, and his dark eyes assessed her. He didn’t smile. His mouth was a firm line on a rugged jaw line that held a hint of stubble. He had dark curls that fell to the collar of his shirt. He wore all black down to the silk tie around his neck. Everything about him was dark including the look on his face, and her heart raced in fright and excitement all at once. She wasn’t crazy; there was someone… something there.

“Who are you?” Calliope asked.

“I thought you knew me. You sensed me, requested my presence, for your patients,” he answered. The tone was deep but soft and held a note of curiosity. “How is it that you can sense me?”

Calliope shrugged. “I can sense lots of things; it depends on who you are. I don’t recall you as a patient of mine.”

A small smile and then it was gone. “No, not a patient, but I have seen you with them.”

“A family member?” she asked.

“No.” He stood with his hands clasped behind his back.

“Then who?” Calliope asked in frustration “And how are you dead and talking to me?”

“Because I am death itself,” he answered. “Or one of them.”

She furrowed her brow. “You’re… you’re a grim reaper?”

“A reaper is fine,” he answered. “I don’t understand why grim was ever added to the title. To some, death is a blessing.”

USA Today Best Selling author Dahlia Rose writes contemporary and paranormal romance with a hint of Caribbean spice. She was born and raised on a Caribbean island and now currently lives in Charlotte, NC with her five kids who she affectionately nicknamed “The children of the corn” and her biggest supporter/long time love. She has a love of erotica, dark fantasy, Sci-fi and the things that go bump in the night. Books and writing are her biggest passion and she hopes to open your imagination to the unknown between the pages of her books.