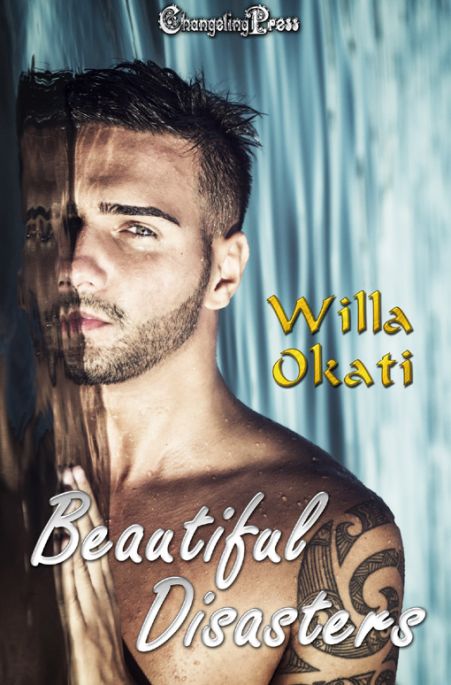 Two wrongs don’t usually make a right. But sometimes — if you’re lucky — against all odds, they do.

A Beautiful Disaster: After being betrayed and abused by an ex-lover, Sean has learned not to give his heart away. But he can’t help wishing he could trust gentle-hearted tattoo artist Riordan…

Enough To Let You Go: Paul loves his simple country life. Problem is he’s in love with Max, who’s got his nose pointed toward London. Paul loves Max enough to let Max go… Now they’ll have to love each other enough to find their way back.

Make a Right: Tuck would take care of the world if the world would let him. Even on the edge of a breakup with Cade he can’t give up hope for their future. Cade knows their one chance at a reconciliation is giving up his secrets, but can he find the courage to take the risk?

The crowds didn’t part easily for Riordan. He’d been gone for far too long from a place he used to know well, and some wanted to talk, some wanted to stare, and some whispered behind their hands or in one another’s ears as he passed them by. Riordan let it all slide off his back. Either they knew and they were cool, or they didn’t and they would or wouldn’t be. As long as he didn’t lose track of the man in black, it worked for him.

“Rio.” Mare leaned over the bar for a kiss on the cheek. He knew better than to try anything like tousling her hair, or he’d draw back a bloody stump. “Everything good?”

Riordan was close enough to the slight dark man to get a sense of his aura and to see him sneaking — in the mirror when he thought Riordan wasn’t looking — glimpses and glances here and there, like an edgy cat creeping close to the demarcation of shadow between his hiding place and the rest of the world. One wrong word, and he’d bolt for sure.

Mare showed Riordan her wrist. “What do you think?” She’d had a watch tattooed on, the long and short hands set to five minutes past last call. “Yeah, it’s as subtle as a brick to the face. Whatever. Got it done when I was in Miami. What do you think? Decent work?”

He took Mare’s hand and turned it to and fro. “More than.” Her artist had used light and shadow to give the watch an almost three-dimensional look, and when she turned her wrist, it cast the illusion of moving time. “Give me the artist’s name later, would you?”

The man in black hunched his shoulders tighter, almost at his ears now. Riordan nodded once at the guy and raised an eyebrow at Mare. She met and matched him and held up both hands, palms out. “You want your usual?”

“Thanks.” Riordan could sense the tension gathering. Never mind a wrong word. If he didn’t take care, this one might break and run, hurrying out and away, and Riordan couldn’t let that happen again.

Riordan tapped his glass against the dark man’s. The dark man flinched, an exaggerated startle response. The corners of Riordan’s mouth crimped in an empathetic frown. Whoever this was, he didn’t need scars to tell his story. Life hadn’t treated him well, and this one needed handling with care.

That was the interesting part. People who came to the Blind Tiger knew what they wanted. Riordan didn’t think this man did.

Riordan had the man’s attention, though. That was something at least. He liked having that intense blue focus fixed on him, shining through the sweep of black hair. “I’m Riordan,” he said, leaving his glass kissing rims with its mate. “I’d ask if we’ve met before, but I already know the answer.” He held out his hand and waited to see if the man would take it, and if he’d hear the stranger’s name.

The dark man’s hand was dry and rough with scar tissue. “Sean,” he said, barely moving his lips. Still, it was a start, and Riordan had done more with less. “I’m Sean.”

Riordan. The name fit him. Different. Not outlandish. He wasn’t wearing his scrubs tonight, but a casual shirt and soft-washed jeans instead. His hand was long and firm. A few calluses. Only a few. Strong fingers. They were so gentle on his that Sean clenched his tighter, wanting to slap the blond.

Sean took his hand back and wrapped it around his almost untouched beer. The bitterly yeasty smell made him want to sneeze, but instead he closed his eyes and drank. The hops and barley were too strong for him by far, thick and sticky on his tongue.

He could feel Riordan watching.

He looks at me as if he likes what he sees. That’s not — I don’t — Sean drank again and wiped his mouth with his fingertips. “You don’t look like a nurse when you’re out of uniform.”

“I didn’t expect a baritone.”

Sean touched his throat. “Oh.” He’d forgotten. No one commented on his voice. “I can’t sing.”

“Neither can I.” Riordan eased onto the empty bar stool beside him. “I am a nurse, actually. A good one.”

“With those tattoos?” Sean drank. He flexed his empty hand. “I’ve seen enough hospital staff to — I’ve met a lot of nurses. They weren’t tattooed.”

“Maybe not where you could see the ink. I’ve met plenty of nurses with body art, and I am a nurse. I work every Monday, Wednesday, and Friday, and weekends if they need me. Other times too.” He shifted to show Sean a pager clipped to his belt. “See?” He had a lean waist and strong thighs. He moved with a sort of confidence, as if certain his body wouldn’t ever betray him. He probably hadn’t known a sick day in his life. “I have two jobs. One as a nurse and one as an artist. They go together better than you’d think.”

The itch between his shoulder blades would drive Sean mad. A drop of sweat rolled from below his nape to the small of his waist and down. He’d almost finished his glass. When had that happened?

“Hey.” Riordan’s hand settled on his. “Are you all right?”

Riordan didn’t let go. He left his hand right where it was. Testing.

Sean’s ears rang in the echo of the thought. Him. He wants me.

“Sean.” He was about to let go. He was warm, so warm, so close. The bar stools weren’t spaced far apart. The lines of his arm, his torso, his thigh, all were inches from aligning with Sean’s.

He touched Sean’s back. Lightly. Over the deepest of the scars from Leo’s belt. Leo loved using the belt because he’d known Sean would cover himself from head to toe, and the marks wouldn’t show.

“Okay.” Riordan held his hands up, palms out. No threat there. “It’s okay. I’m sorry. I forget some people don’t like being touched.”

Don’t like being — Sean choked off a bark of laughter and swallowed the rest of his beer. The dregs went down almost too thick to swallow. “Don’t,” he said. “Don’t stop.”

“Are you sure about that?” Riordan laid his hand on the bar, palm up, forming a cup. His nails were cut close and kept trimmed neatly. His hair curled at the ends where it brushed the tops of his shoulders. If he didn’t have a dusting of dark blond stubble, Sean could have described him as pretty too.

Or not. Pretty wasn’t a strong enough word. Riordan was beautiful up close, not just at a distance. His eyes were variegated hazel, mostly green until seen from inches away, and then they had starbursts of amber and brown surrounding the dilating pupils. His lips were just lips, not too firm or too full or too thin, but the marks at their sides showed he smiled more often than he didn’t. He couldn’t be older than Sean but had crow’s-feet starting at the corners of those eyes.

Sean couldn’t form words, but he made himself nod.

“Then what should I do?” Riordan asked after three beats, or more, of silence. He spoke carefully. Too much so. Treating Sean as if he were made of spun glass and he’d shatter if he were hit —

“Don’t be gentle,” he said. He sounded to himself as if he’d already cracked. Sharp edges and twisting points. “I know what I came here for. I know what you came here for. You can have it. Me. If you’re not gentle. If you are, I’ll walk away, I swear to God.”

He turned his head and tipped it back to drain the shot glass. His heart pounded in his ears. Why? He didn’t know why. Only that if Riordan was kind, kinder than this, Sean really would lose it and he’d never be able to try again, and —

Riordan watched him. He was one of those guys who took his time when Sean didn’t want time. At least he didn’t try to pet or pat him. He might pity Sean, but as long as he kept it on the inside that would be okay.

He swallowed his shot, motion fluid, and covered the top with a ten-dollar bill. “Okay,” he said. Sean couldn’t tell what he was thinking. Good. He didn’t want to. “Not here.” He slipped off the bar stool and didn’t offer Sean a hand down. Only waited for him to climb on his own. “I don’t live far. Will you come?”