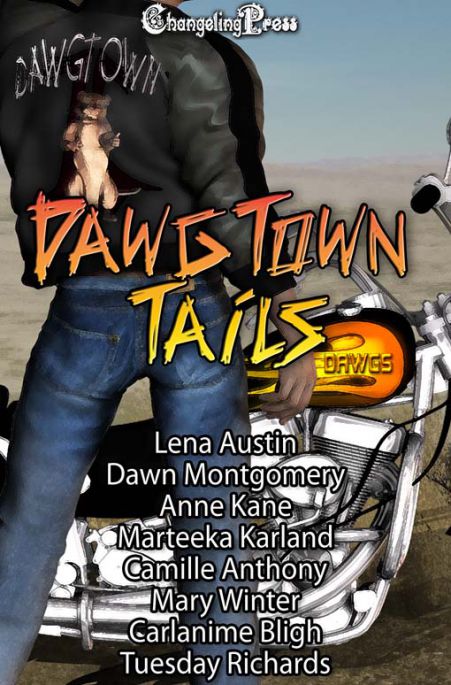 One very special town. A whole lot of very bad — and very hot — Dawgs. Prairie Dawgs, that is…

Mary Winter: Chip & Dale: Usually a prairie dog colony is one male, several females. Tusa wants it the other way around.

Dawn Montgomery — Playing for Keeps: Riley holds all the cards, but Tara’s playing for keeps.

Camille Anthony — Puppy Dawg: It’ll take both hell and high water to set two stumbling lovers on the path to each other.

Tuesday Richards — Mad Dawg: Bryce’s bad started when he dodged a prairie dog and laid down his prized motorcycle… Can the day get any worse?

Carlanime Bligh — Prairie Rose: There’s a hunky new librarian in town, the moon is full, and Rose is in heat!

Kaylee paused and stared at the prairie dog town that spread out endlessly across the flat terrain. Hundreds of the cute little critters popped their heads out of their burrows and started to whistle the minute she’d stepped out of her sporty little Miata in the parking lot of the Prairie Dawg Saloon. The full moon tonight must be affecting the furry little things.

She ran her fingers through her hair and pushed her way through the front doors of the saloon. The subdued roar of conversation she’d heard from the far end of the parking lot stopped as every male in the place turned to stare at her.

Great. She’d come here to blow off some steam. After a hellish day at work that culminated in that bitch of a boss firing her in a very public display of jealousy, she didn’t need a whole room full of people staring at her. She glared at the two men closest, a couple of burly biker types she’d normally drool over, and they quickly looked away. She turned her head to glare at the room in general and felt a surge of satisfaction when the men shrugged and went back to whatever it was they were discussing.

Pleased with herself, she stalked over to the bar and hopped up onto a barstool. A nice cold bottle of beer would go a long way toward helping her mellow out. She spotted the bartender talking to a dark-haired man farther down the bar. He straightened up when she caught his eye and headed toward her.

“Evenin’, ma’am. Name’s Bucky.” He studied her with open curiosity. “I don’t recall seeing you around before, but you look mighty familiar.”

Kaylee rolled her eyes. That had to be the lamest pickup line in the book, and she didn’t dignify it with an answer. “Give me a cold beer. Please.”

“Comin’ right up.” He gave her a bucktoothed grin and waddled off toward the cooler.

She eyed up his plump figure, struck by his amazing resemblance to the prairie dogs that lived in a huge warren of dens and burrows outside of town. The locals occasionally grumbled about the antics of the cute little rodents, but they were fiercely protective of them. “They may be a dang nuisance,” Aunt Cee often said, “but they’re our nuisances, and nobody’s going to hurt a hair on any one of their plump little butts.”

Well, cute as the prairie dogs were, a plump butt didn’t send any shivers of excitement down her spine. She swiveled on the bar stool and surveyed the prospects. For a notorious biker hangout, the action looked tame. Sure, most of the guys sported at least some leather…

“Blake. It must’ve been Blake.”

She turned back to the bar, frowning as she accepted the frosty bottle from Bucky. “What must have been Blake?”

“Sorry, sometimes I’m a bit hard to follow.” He gave her an apologetic shrug. “Blake was a real nice guy, friend of just about everyone here. He came in one day, bragging about this girl in town, real looker. Said he was going straight, going to marry her. Got picked off by a damn eagle the very next morning.” Bucky shook his head sadly. “Never did figure out who the girl was, but it must’ve been your mama. You’re the spittin’ image of him, and the scent is unmistakable.”

Kaylee stared at the chubby bartender in alarm. She assumed an eagle would have to be a rival biker gang, but what the hell did he mean by “scent”? Surely, he didn’t think she smelled like some guy he used to know! She picked up her beer and edged away from the bar. The last thing she needed today was another person flipping out.

A movement at the back of the bar caught her eye as a dark-haired biker sauntered across the well-worn dance floor. Snug fitting jeans showed off his tight butt as he leaned over an ancient jukebox and pushed a few buttons. An old country tune filled the air, and the man straightened, turning to face her.

Kaylee sucked in a deep breath as molten heat ignited deep inside her and she felt her pussy dampen. He caught her gaze, dark eyes smoldering with passion as he sauntered over to one of the well-worn tables and picked up a long-necked bottle, taking a deep swig. Tall and lean, he wore a tight tee shirt and a worn leather vest with those jeans. No plump butt on this one. Despite the sudden feeling that she was in way over her head, Kaylee found her herself drifting in the direction of the jukebox.