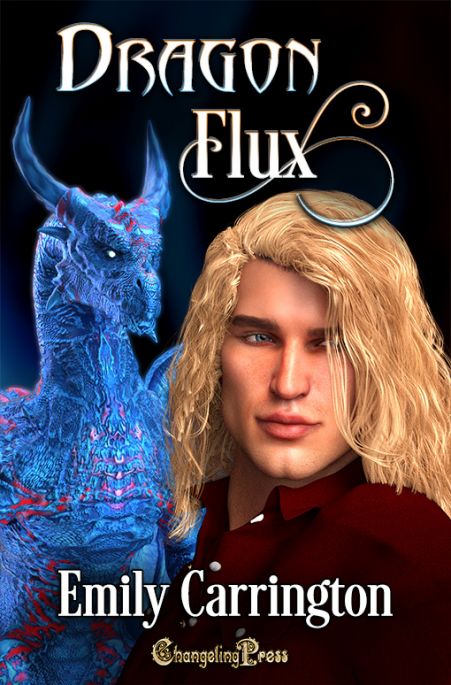 When Luke, a genie, figures out that his husband is depressed because they’ll never have children, Luke takes on the ultimate challenge and becomes a female dragon.

His husband, Mark, is put off by breasts and a vagina at first… but then he realizes it’s still Luke under the new curves and his lust for Luke can never be assuaged.

With all the struggles presented by pregnancy and prejudice from the magical world, will Mark and Luke bring their baby into the world amid joy or stress?

pre-order at retailers for April 26th

It was almost ten that night when Mark dragged his ass into the condo. His head hurt, his arms hurt — he’d been re-shelving boxes for the last two hours of his shift — and his brain hurt from the pounding he’d given it as he struggled to focus. Not even driving home in his muscle car could release his tension. Now, all he wanted to do was curl up beside Luke and fall into an exhausted sleep.

But the first thing to hit his senses when he opened the door was the scent of cinnamon rolls. His stomach growled and he realized he’d skipped dinner. Again.

Following his nose into the kitchen, he found that Luke had made the sticky pastries from scratch. And there was a small tub of fresh, thick frosting. It was still warm.

Rather than indulge his sweet tooth, Mark took the tub of frosting, crossed the living room, and stopped in the doorway to the master bedroom.

Luke, naked and holding a small knife, leaned against the closet door. He hadn’t used the knife yet and he was half hard.

“I thought I would have to draw blood without you,” the genie murmured, his eyes half lidded. The blade vanished. “Is that for me?”

Mark carried the frosting in and stood in front of his husband. “Is this your way of telling me I haven’t been paying you enough attention?”

“Something like that.” Luke dipped a finger into the tub and spread the gooey stuff over his shoulder. “I need your teeth, my Mark. Please.”

Mark hesitated. “Luke, I love you, but I’m exhausted.” He was also partially erect within his dress pants, but right now tiredness held sway.

The knife reappeared in Luke’s hand. Without preamble, he cut his shoulder through the frosting. He hissed but his cock twitched. “It’s just not the same.”

Mark’s mouth flooded with saliva. He swallowed. “Luke…” He reached out and ran a finger through the bloody mess, licking up sweetness and salt. His stomach growled again. “You’re irresistible, you know that?”

His lover grinned. “Bite me, or I’m going to have to make do with less satisfying means.” And he moved to cut himself again.

It probably would have seemed disgusting to anyone who wasn’t a dragon, but Mark lusted after Luke’s blood almost as much as he lusted after the genie himself. The fact that Luke got off on the pain only made it better. Mark moved close, briefly cupped Luke’s balls, and then set about licking off the frosting and blood. When it was all gone, he used his dragon-made saliva to heal the wound left behind. Then he took the tub and applied a generous portion to Luke’s other shoulder and upper arm. Then he began nibbling, licking, and lightly biting. Between them, Luke’s erection strained.

“Take your clothes off,” the genie begged.

“Would you mind making them disappear?” Mark grinned when Luke did as he asked. Then he stepped back, made sure he had Luke’s undivided attention, and stroked himself slowly.