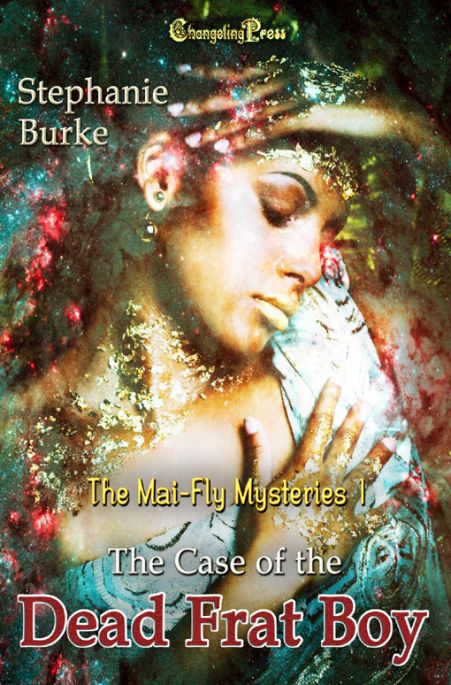 When an obnoxious frat boy hits on Fae Mai-Mai Collins, she nearly gets arrested for magical assault. But then he ends up dead on the back steps of her cafe, and her life, as well as that of her Gremlin lover, Ry-Ry, is sent into a tailspin.

Now the police are on her tail about the murder, her business has become a spectacle for Fae watchers and Fae haters alike, and her life seems to be in danger from some unknown force.

With a magical geas taking over her body to find the truth and a host of frat boys and sorority girls all lining up as suspects, it’s hard for the mild mannered coffee shop owner to tell who is guilty and who is the victim.

Mai Collins looked up from the book she was trying to read and stared at the man who unceremoniously dropped down into the seat opposite to her. She looked around the nearly empty coffee shop before shooting her uninvited guest a narrow-eyed, exasperated look and then again glancing around the Java Jump, hoping that he would catch the hint, but nope. He went right on speaking as if the huge, unsubtle hint she had thrown in his direction had never happened.

“I think you’re beautiful, but you would be even more so if you smiled.”

As if to demonstrate, he opened his mouth in some facsimile of a Miss Universe smile, complete with dimples. She was nearly blinded by the blue-white porcelain caps that glinted in the recessed lighting like a cosmetically implanted dental star. All that was missing was the high-pitched tone emphasizing the perfection of his artificial smile.

He really wasn’t that bad looking, once you got past the artificial moonlight of his teeth. He had short dark hair, deeply tanned skin, and a body that appeared to have more experience in a gym than in etiquette classes, because really… who just sits down at a table and throws out one of the cheesiest and most insulting pick-up lines ever?

This will not stand. She carefully placed a bookmark in her book and laid it on the table beside her cup of cooling peach nectar. People who creased pages were real monsters and deserved to be slapped about the face and head until they got a clue.

“You know,” she spoke in her smoothest tone, tossing long tendrils of her curly auburn hair behind her shoulders as she leaned forward. “I have a theory, too.” She shot him a sultry look that had him grinning harder and leaning forward to make their conversation more intimate.

“I have a theory that you will be more attractive from behind…” He perked up, then her voice fell flat “…as you walk away.” His smile fled and her face dropped into its usual resting bitch-face of epic proportions before she curled her lip in disgust, exposing two of the daintiest, sharpest fangs to ever grace a preternatural creature. “Care to test out my theory and prove how true it is? Why don’t you walk the fuck away?”

For a moment he stared at her in shock before the color drained from his face. The sound of his chair scraping back as he lurched to his feet was even sweeter than the sound of his muttered “You ain’t that hot” as he scurried out of her sight.

“I was right!” she called out to him. “You didn’t miss squat day, but that doesn’t mean you have to be a total ass!”

He left her shop, and she picked up her book.

Once again, life was beautiful.

Mai should have seen it coming. After all, she was dealing with humans, and when one dealt with humans it was best to assume the worst in any situation.

“I did not attack that boy,” she growled at the two detectives — Magics Division, of course — who now stood, grim-faced and determined as they tried to surround her in the middle of her coffee shop.

She glanced around at her customers. The humans showed a mixture of concern and fascination as they tried to see what was going to happen next. Most, however, being Fae themselves, were doing one of two things: the newbies were heading for the hills at the first sight of the iron badges and suppressant collars that hung from the two officers’ belts; and the regulars had their phones out because Fae harassment by law enforcement was finally getting recognition as something that every Fae, no matter the type, had to put up with because of the stupid magical malfeasance laws. The damn laws hadn’t really changed since the 1500s, when most Fae populations decided to make themselves known to humans — with the most disastrous of consequences. There was a time not too long ago when the Fae could be killed on sight, and from the way the police behaved, one would think those laws still applied.

And finally, the watchers who believed Fae were genuinely evil and were a blight against their god, no matter who or what they were worshiping this week, were trying to pack themselves into her coffee shop to see the downfall of another twisted being that shouldn’t exist.

For someone who liked to live life low-key, this was an utter disaster.