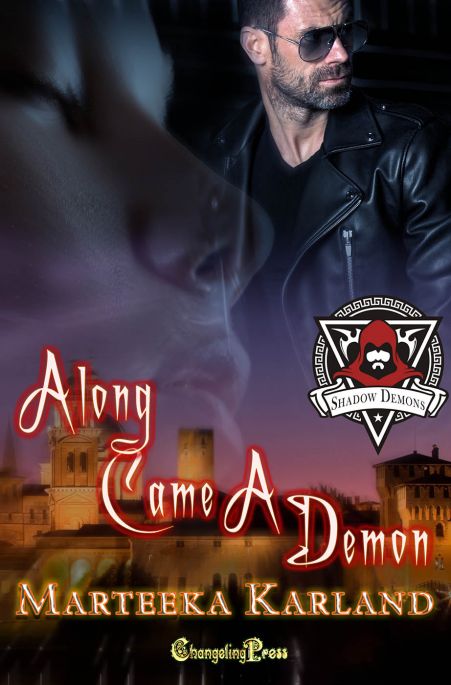 A Shadow Demon, hell-bent on protecting his city…

Alexei Petrov has more money than he can ever spend in many lifetimes, but his life is more than glitz and glamour. Behind the scenes, Alex is part of an elite group working in the shadows, hunting down those who would prey on the most vulnerable in the city. Which is how he found the most desirable women he’s ever seen.

A young mother in fear for the life of her child…

Merrily fled with her daughter with death on her heels. She has no idea what her father has done, but he’s managed to throw her and little Bellarose into the middle of a war. Scared, hunted, Merrily gets caught in the crossfire of what looks like a gang war, but it’s something far more sinister. A desperate flight lands her in the arms of Alexie Petrov. Literally. And the man is everything she knows she can never have but wants with every fiber of her being.

Even tucked safely away in the home of the richest, most powerful man in the city of Rockwell, Merrily’s past finally catches up with her. Bellarose’s father has come calling, and hell is hot on his heels. Fleeing seems like her only option, but Alex is just as dangerous as anything headed her way. And far too seductive and possessive for her peace of mind. Though she knows he will only break her heart, Merrily can’t resist the lust that burns between them and soon finds herself more than infatuated with the man. Needing to prove her worth, Merrily knows she’s up for the challenge. Welcomes it. But just who are the demons in the night? And why does she welcome this one’s embrace?

The thing about homeless shelters was they were exactly what the name described and nothing more. Shelter. For the homeless. There was nothing remotely safe about them. Merrily Dane couldn’t remember the last time she’d had a decent night’s sleep. Between the creepy pervert who was supposed to be on the other side of the room away from the young mothers and children, and the drug addicts — who weren’t supposed to be there in the first place — making deals at all hours of the night, she was turning into a paranoid insomniac.

She tightened her hold around her daughter, Bellarose, and whispered next to her ear, “I love you, pumpkin.” Merrily hated being in this situation, but until she could get on her feet again, she didn’t have much choice. Getting back on her feet wasn’t going to be easy without an identity.

“I love you back, Mommy.” Somehow, the child seemed to know she needed to keep her voice down. She’d learned quickly in the time they’d been on the run. It broke Merrily’s heart nearly as much as it made her angry.

“When we get to our forever home, can I have a black cat, and a white cat, too?”

Fortunately, the lady next door had agreed to look after the animal while Rose and Merrily were on “vacation.” Mrs. Burton had offered to take the cat several times in the past so Merrily didn’t feel like she’d imposed too much on the older woman. Instead of a fun-loving outing, however, she and Rose were stuck in a homeless shelter trying to make their way out of the reach of whatever gangster her father had crossed.

The barracks layout of this shelter wasn’t exactly conducive to privacy or quiet, but it was all she’d been able to find with an available bed in this city. This time of year, the shelters were maxed out. Luckily, she’d found a spot in the corner so she could put her daughter on the inside of the bed and herself between Rose and everyone else. It was a small, bunk-style bed barely big enough for one person, but Merrily was small and her daughter was only four. She figured she needed to find something better in the morning because this place was seriously creeping her out. Then again, it was probably the only shelter that didn’t require an ID and she couldn’t afford to be on the grid.

Which brought Merrily to her greatest worry. Despite the shady characters surrounding her, despite not knowing where their next meal was coming from, despite the shelter being one step away from being out on the streets alone with a four-year-old, Merrily was terrified her father’s “employers” were finally on her trail. It was nothing overt, just a feeling of being watched.

Bellarose shivered and Merrily brought the threadbare blanket higher to make sure the child was covered completely. She hated turning her back to the room — especially since she knew she needed to keep an eye on everyone and everything — but she knew she was too slight of build to be much good in a fight and the only protection her daughter had was Merrily’s own body. She tried to shift the arm pillowing Rose’s head to get circulation going again.

Life sucked sometimes. She and her beloved daughter were cold. In a homeless shelter full of shady people. Terrified out of their minds. Being hunted. She could practically feel the hunters breathing down her neck. She had to get out of this city. The only reason she’d stopped here was because it was as far as her money would take her and the only city with a bus station in the area.

After a couple of hours worrying about what her next move needed to be, she finally drifted off, wondering how the hell she was going to get herself out of this mess.

“If you keep Hell Bitch waiting, it will just be that much worse.” Azriel wasn’t actually referring to a person. He referred to the white cat that had adopted the Shadow Demons as her humans. She completely ignored the black cat currently dozing in Azriel’s lap. The white cat’s gaze focused completely on Alexei Petrov, and Hell Bitch’s ears were laid back in that way cats have of showing their complete displeasure with someone.

Alexei Petrov glanced down at the feline warily. The beast might look innocent sitting there all prim and proper-like with her tail curled around her paws, but she was even more of a demon than any man in their organization. Alexei and his crew were justice when justice was overlooked or beaten down. Called vigilantes by some. Heroes by others. Personally, Alex thought all of them fought their individual demons so the name Shadow Demons fit in more ways than one.

“Don’t let the pussy make you a pussy, boss.” Giovanni Romano was the tech guy in a group of tech guys. If there was a gadget he didn’t have or know how to get, no one had ever been able to name it. Not only could he obtain anything they wanted or needed, he made himself an expert with it in a few hours, thanks to his photographic memory and genius IQ. If he still didn’t have what he needed — or wanted — the bastard simply made it. He was invaluable in their endeavors, but he was a bit of a smart ass.

Alexei flipped him off as he bent down to scoop up Hell Bitch, as they affectionately called the demon cat. She abruptly flattened her ears, bared her teeth, and scratched the shit out of him. When he dropped her, she turned and sauntered over to her food bowl and sat down, again looking straight at Alex.

“Bitch,” he muttered under his breath. The cat growled softly, her dual-colored eyes narrowing. “Just for that you get the dry food.” He poured a scoopful into her bowl. Hell Bitch reached over and upended the bowl as if to say get me the fucking Royal Canin, bitch boy.

Alex raised an eyebrow, glancing at Gio, who was studiously looking everywhere but at him. Then Alex stomped to the cabinet and grabbed Hell Bitch’s favorite flavor from a stockpile of canned cat food. He opened it and the cat’s whole face relaxed as if in bliss. Again, she sat all prim and proper with her tail wrapped around her feet until Alex had gotten every morsel out of the can.

“Have at it,” he grumbled. When Azriel snickered, Alexei smacked the back of his head as he walked by. “Next time,” he told Azriel, “feed her before six. I’m not the only one with access to the fucking cat food.”

“She thinks it’s your job to feed her in the evening,” Azriel commented, raising a hand in surrender. “You know she won’t eat unless you put her food out.”

“Fucker,” he muttered as he stalked through the room to the shower. It had been a long fucking day and he just wanted to scrub himself from head to toe.

Before he could, however, Giovanni stiffened and sat up straight in his chair. Alex paused. “We got bad guys afoot?”

Giovanni’s workstation consisted of a wall of monitors showing every corner of the problem sections of the city of Rockwell. The wealthy, more affluent sections monitored themselves, but the people in the sectors the Demons monitored were at the mercy of the city’s underground crime bosses. This was where men like the Demons were needed. Places the police were afraid to go. As time-consuming as it was setting up tech to monitor these places, as well as the endless testing of gadgets and physical training, this was something Alex knew he had to do. It was what he had been born to do.

“Hell’s Playground.” Azriel sighed as he glanced over Gio’s shoulder. “It’s every fucking week with that place. If there’s trouble, you can bet it will be there.”