Doctor Arely Sampson fights to save her fellow crewmembers
even as an alien fever burns inside her. 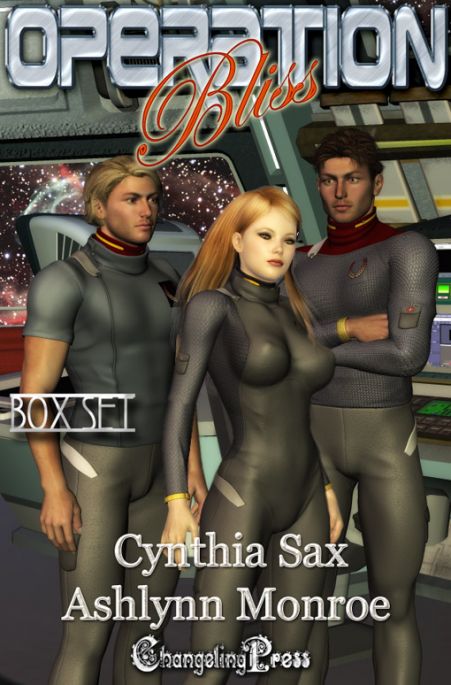 The crew of the Galactic Alliance exploration vessel Bliss has discovered many uncharted worlds. They’ve faced many dangers. Yet nothing has prepared them for the new threat burning through the crew like fire. Lust. When they rescue a dying alien, they have no idea he’s infected with an undetectable pathogen that will attack the crew through their most primal desires.

Publisher’s Note: The Operation Bliss Box Set contains the previously published novellas Dr. Feel Good and Sexual Healing by Ashlynn Monroe and Skies on Fire and The Search Is Over by Cynthia Sax.

Dr. Arely Sampson, ship’s Medical Officer, jumped as the emergency warning sirens screamed out. She nearly dropped the vial of blood she’d just taken out of the centrifuge. With shaking hands she put it down and took off her gloves.

Arely tapped the smart fabric on the arm of her uniform. The fibers lit up and the captain’s image appeared. “Doctor, we need your team to shuttle bay three,” Captain Zahara ordered. “We’ve run across an Emergency Escape Pod. We’re reading one life form. VI has swept the pod and reports the occupant is alive, but life signs are weak. We’ll need your crew to secure the pod and transport the patient directly to isolation.”

“We’ll be there right away, Captain.” Arely grabbed her scanner and her med kit. She tapped her comm again. “Lt. Tamalia, get a team together and bring the decon unit to shuttle bay three.”

“The security team is already on the way,” the lieutenant replied.

In the corridor Arely paused momentarily to glance out a starboard porthole. A robotic arm was attaching to the EEP and drawing it toward the shuttle bay doors. She broke into a run. “Level Three,” she told the elevator as she stepped inside.

Thirty-six seconds later, she exited on the level she’d requested.

“The decon unit is ready, and there’s a security crew waiting on the dock,” Lt. Tamalia replied to her unspoken question.

She nodded as they jogged toward the shuttle bay. “Understood.” Arely turned on the portable scanner.

“Cargo bay doors are now closed and atmosphere has been returned to normal,” VI reported. “You may enter.”

Six Bliss crewmembers dressed in bio-hazard suits burst in to surround the small emergency pod. The doors sealed tightly behind them. Lt. Tamilia ran a scan of the door to verify the seal was airtight. The decon tube was ready to transport the alien. A bright light danced over the smooth metallic surface as VI scanned the pod. The pod opened and Arely got her first look at the very naked, very male body inside. Her eyes widened as she noticed the length and girth of his penis. Even limp the thing was impressive!

Arely pushed the unprofessional thought away and focused on what was important. The alien lay very still. For a moment, she thought he might be dead but then the scanner bleeped. He was alive. Barely. She gazed down at the expanse of pale flesh folded inside the emergency escape pod. He was far too large for the small space.

She stepped closer and the armed security detail made room for her near the decon unit. The alien’s tall, muscular body twitched, and she took a quick step back. The others around the pod reacted immediately. She could hear the whirl of stunners coming off standby.

“We’re going to need to take the tube to the medical bay,” Arely informed the group.

The Chief of Security, Nikili Berak, gave her a sour look. The handsome man’s mouth twisted. “Doctor, I understand your professional curiosity, but I cannot jeopardize the Bliss so you can study this creature.”

“Creature? According to VI’s readings, this being is humanoid and sentient. Per the 3056 act of medical reciprocity any Galactic Alliance ship is obligated to provide medical aid to all sentient beings we encounter. We will transport him to my med lab.” She glared back at the roguish Mobian. His people were fierce warriors, and he had a body that made her woman side purr — even as his professional side irritated her.