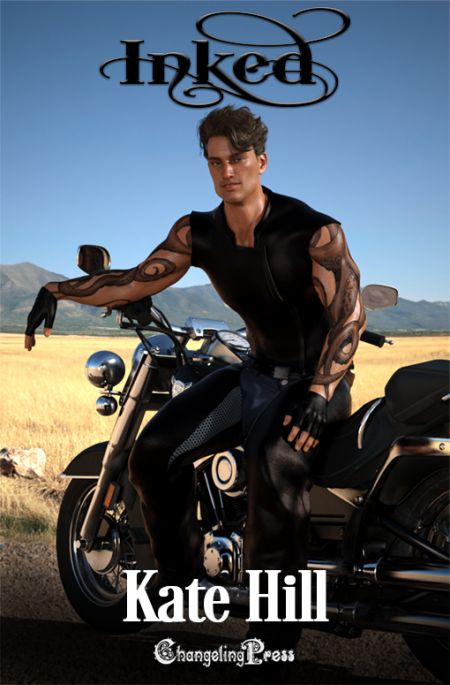 Rough Waters: Geoffrey meets a woman he can’t resist, but is Samantha part of a scheme to tempt him into indulging in his long-repressed bloodlust?

Cactus Juice: Stranded on a desert road, Adrian meets a sexy biker who offers him a ride — in more ways than one.

Mountain Men: Jay thought their situation couldn’t get any more complicated until Lydia arrives. She must find a way to bring about peace, or see both Kaelen and Jay destroyed!

Climax: A warlock’s evil spell sent Angela down a path of destruction. The only man who can save her is the one she considers her worst enemy — Damon Tinta.

The man performing pull-ups caught Samantha’s eye not only because he had a body like a heavyweight boxer, but because tattoos covered him from the top of his shaved head to the waist of his black workout pants. The artwork probably extended to his lower body too.

At the gym she normally didn’t gawk at other people but focused on her workout, yet this guy commanded attention. On her way to the free weights, she passed him and stared at the broad expanse of his sweat-slicked back. Her gaze focused on the tattoo of a ship at sea. His rippling muscles gave the illusion of waves rippling around the vessel.

Samantha paused, unable to look away from the waves moving up and down.

The spray of salt water on her face roused Samantha from her stupor. Her heart pounding, she glanced around. Instead of the familiar sight of weights, treadmills and other gym equipment around her, she saw people — most in evening wear — mingling on the deck of a yacht.

Glancing down, she nearly gave a scream of shock to find her workout clothes had been replaced by a low-cut, sleeveless silver gown and matching strappy sandals.

“Are you all right?” asked a slightly raspy but sexy male voice. A hand gently touched her lower back.

“No, I don’t know what happened,” she said, turning and staring into the most beautiful blue eyes she’d ever seen. They gazed at her with concern and underlying strength. He had a chiseled yet masculine face topped with reddish blond hair cropped close to his head. A strange feeling swept her, but she blamed it on the sudden disappearance of the gym.

“What do you mean?” he asked. This time Samantha detected a slight English accent. Tall and lean, he wore snug jeans, and the sleeves of his tan shirt were rolled up, exposing his powerful forearms. The shirt was open almost to his navel, and she tried not to get distracted by the sight of his sculpted chest.

“I don’t know how I got here. I was at the gym and… I have no idea where I am.” Panic almost overtook her, but the man slid an arm around her and guided her away from the ship’s rail.

She probably should have pulled away, but at the moment she needed someone to take control. Truly she had never felt so confused and scared in her life.

“Did you have a lot to drink?” he asked.

“Are you here with someone or did John invite you?”

“He owns the yacht.”

“I don’t know any John with a yacht,” Samantha said and allowed him to lead her below deck to a room decorated in red and black. People mingled, drinking, dancing and talking. A bar stood at the far corner of the room and to her right people lingered around a buffet table.

“Geoffrey.” He guided her onto a chair and stooped in front of her, gently tilting her head from one side to the other, his blue gaze fixed on her neck.

At that moment she collected herself — or started to.

“What are you doing?” she asked. “Where am I exactly?”

“We’re somewhere off the coast of Hawaii. You don’t remember anything?”

He stood and walked away. Despite being dumbfounded, she noticed the curve of his tight ass in the jeans.

What was wrong with her? She had absolutely no recollection of arriving on this ship, of being invited, or of meeting anyone named John.

Moments later, Geoffrey returned with a shorter, dark-haired man dressed in black whom he introduced as Dr. Wayne Butler. He asked her a series of questions, such as her address and the date, which Samantha answered without difficulty.

“I’m not crazy,” she said, then her brow furrowed. Or was she? After all, she was here on this yacht but had no idea how she had arrived.

A third man approached, this one tall and pale with steel gray eyes. He wore a black suit and charcoal tie. His short black hair was perfectly styled, despite the cool ocean breeze.

“John, what can you tell us about Samantha?” asked the doctor.

Geoffrey stared hard at their host, whose handsome brow furrowed. He shook his head and said, “I’m sorry. I don’t believe we’ve met.”

“No. We haven’t,” Samantha said. She’d have remembered him. He had eyes like the villain in a suspense flick.

“She doesn’t remember how she got here,” Dr. Butler said. “I suggest letting her rest for a while and turning back to shore. She should be checked out at a hospital.”

John smiled. “Of course. Samantha, do you need help back to your room?”

“Don’t worry. We’ll find you one.” John offered her his arm.

He and John locked gazes, and Samantha had the awful feeling they would come to blows then and there.