I’ve never been good at backing down,
especially when I see something I want. And I want Emmie… 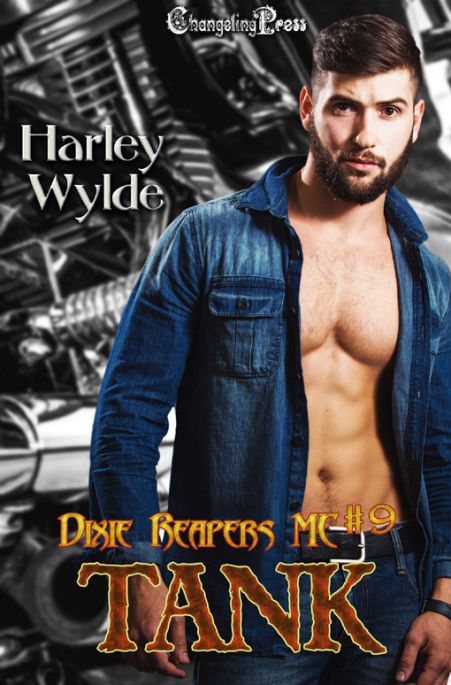 Emmie — I overheard my father promise my hand in marriage to a man who is so cold I’m not sure he even has a heart. So I did what any young woman would do. I ran. My sister, Federal Agent Lupita Montoya, gave me sanctuary in the US and helped me file the proper paperwork so I could stay indefinitely. Now Lupita is in prison and my time is running out. My father and Ernesto will be coming for me. When Lupita sends me to the Dixie Reapers compound in Alabama, I know they’re my last hope. I just didn’t count on falling for one of them.

Tank — The hot little Latina I’ve had my eye on for three weeks is in trouble, and the time for waiting is over. I thought I’d claim her, get those Spanish bastards to back off, but then she knocked me off my feet. Emmie is really Emelda Montoya, sister to the woman I chased around Christmas, and someone my club owes a debt. It makes Emmie hands off, but I’ve never been good at backing down, especially when I see something I want. And I want Emmie to be mine. She’s over a decade younger than me, but I’m not going to let something like age stand in my way, and I’m sure as hell not going to let her mobster father get between us. I’ll bury him if I have to, along with that sick bastard, Ernesto.

But the more digging my club does, the more twisted the tale becomes. For the first time in my life, I’m not sure we can handle the trouble that’s landed on our doorstep, but I will die trying to protect the woman I’m falling for, the woman I accidentally knocked up, the woman I call wife.

Warning: Contains some violence and some darker themes. If you’re looking for a sweet read, this isn’t it. There’s melt-your-panties sex and a biker who will stop at nothing to protect the woman he loves.

The new waitress at the diner was a cute thing, and familiar somehow. Her dark hair hung down her back in curls, nearly falling to her waist even with her hair pulled back in a ponytail. It was the first thing I’d noticed. The second had been the killer curves that would be more than a handful. I’d always had a thing for short, curvy women. Her skin was flawless, even though she looked overly tired with dark circles under her eyes.

Fatigue seemed to be weighing her down, and I noticed she struggled to keep up. She’d popped up a few weeks ago, and I’d been here nearly every day since the first glimpse I’d had of her. It was her eyes that seemed so familiar.

“Isn’t she a little young for you?” Wire asked, nodding toward my obsession.

I shrugged. It was true enough, she didn’t look very old, and I preferred my women closer to thirty, if not older. Didn’t mean I couldn’t look. Woman with a body like that, it was really damn hard not to stare. I got hard just thinking about that perfect ass of hers, bent over as she begged to be fucked. I wondered if she was a screamer.

I wasn’t the only one noticing her. Several of the male customers checked her out. I’d even seen one try to grab her ass, but she’d managed to twist away. I’d been about two seconds from getting up and handling the situation, but she’d kept going like it hadn’t happened. Made me wonder if she dealt with that shit all the time, and it only pissed me off. I’d never condoned men taking what wasn’t offered. There was a difference in fucking a willing woman and trying to grab someone who didn’t want your attention. Some assholes learned that the hard way, usually after I’d put my fist through their face to teach them some manners.

My conscience pricked when I thought about Wraith’s woman, Rin. I’d nearly tossed her out on her ass the first night she’d appeared at our gates. If I’d done that, she’d be dead right now. I’d been an asshole to her, and I wasn’t proud of myself. At the time, I’d been hurting over a stupid cunt who had tried to trick me into staying with her, and I’d taken it out on poor Rin. Blair had been a complete bitch, but I hadn’t gotten away soon enough. I’d apologized to Rin for my behavior since then, but I knew Wraith wouldn’t forgive me anytime soon.

The petite waitress didn’t seem like the kind of woman who would string men along, unlike the woman I’d been seeing up until two years ago. I’d found out Blair had several stallions in her stable, confronted her about, and then she’d tried to trick me into believing I’d gotten her pregnant. I’d strung her along a little longer, until I could prove her to be a liar. She hadn’t soured me on women, though. Pissed me off good and proper, but I still got my dick wet at the clubhouse often enough. No, the woman who had fucked me over in my early twenties had soured me on relationships. Blair was my first attempt to be with a woman longer than a few days, and look how that had turned out.

The little Latina waitress had a name tag that said Emmie and the name was as cute as she was. My brothers had given me hell, telling me I should just ask her out. I was always careful not to sit in her section. I’d noticed the first time we’d come in after she’d been hired she froze when she saw us enter the diner. The blood had drained from her face, and I’d thought she might faint. It wasn’t the first time a woman had been afraid of us, and I doubted it would be the last. I knew I was more intimidating than most with my height and size. I wasn’t the enforcer for my club without reason. Someone started a fight, I could finish it, usually with them requiring a coroner when I was done.

“Are we going to eat here all the damn time just because you want to bang the hot little Hispanic girl?” Tempest asked. “Because the food is decent enough, but I’m starting to get tired of it.”

“No one said you had to come along,” I told him, my gaze still locked on Emmie.

“And miss it when you finally find your balls and go talk to her?” he asked. “No, until you man the fuck up and ask her out, I’ll just keep tagging along. Might be worth it if she shoots you down. I don’t think I’ve ever seen a woman turn you away, except that federal agent. That one over there, she doesn’t look like someone who would be interested in a guy like you.”

“For one, she’s what? Five feet nothing to your six feet five? How the hell would that even work?” Tempest asked.

I looked over at him and raised a brow. “Really? Do you need lessons? Is that why you’re still single? Not keeping the ladies happy in the bedroom?”

Tempest flipped me off, and I went back to watching Emmie.

No one knew her story. I’d asked around, but she was a complete unknown. No family in the area, and I’d heard she was staying at some shit motel on the other end of town. It wasn’t safe, and I’d taken to driving by there when I knew she was going home from work. Even though I made sure she got into her room without any problems, it was impossible to guarantee her safety past that. Not unless I camped out at her doorstep all night.

The bell over the door jingled, and Emmie went deathly pale, dropping the plate she’d been carrying. It shattered at her feet, but she was frozen in place. My gaze locked onto the men who had just entered the diner. It was obvious she recognized them, even though I didn’t, and I made it my mission in life to know all the big players in town.

Note from the Author:

I know a lot of readers were hoping Lupita would end up with Tank. While that obviously isn’t how things ended up with the series, I can say that Lupita will get her own book at some point (probably as part of the Bad Boy Romance series). I promise that Emmie is completely perfect for Tank, and Lupita will get a happily-ever-after. She just needed someone who would balance her out a bit more than Tank does.

I hope you enjoy the book!