Theirs is a love story that was only waiting
to happen – and a future worth fighting for. 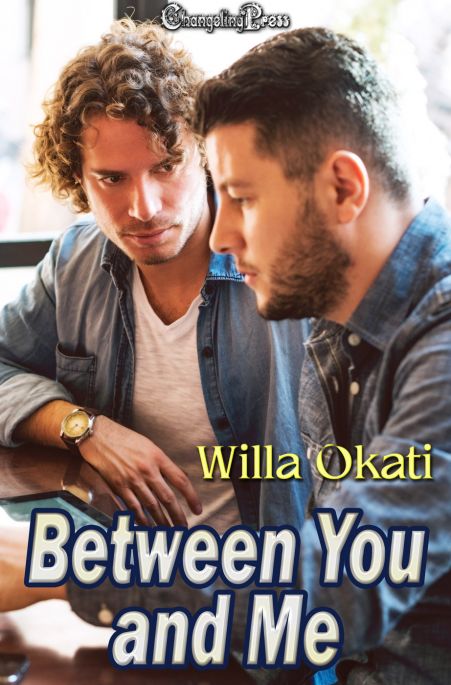 Theirs is a love story that was only waiting to happen – and a future worth fighting for.

By Your Side: Seven years ago Matthieu fell in love with a man fifteen years his junior. Roman swore he wanted nothing more than to settle down with Matthieu. Matthieu tried to do the right thing, hoping Roman would forgive and forget him. But Roman’s never been good at taking “no” for an answer — especially when he knows his partner really wants say yes, yes, yes.

Between You and Me: Quiet, reserved Daniel admits to being a “serial monogamist.” He’s holding out for forever. Ian, Daniel’s closest friend, falls in love at least once a week. Somehow, when neither of them were looking, Daniel stole Ian’s heart, and Ian stole Daniel’s. And they’re both smart enough to know that’s something worth fighting for.

In the Key Of: Teague seems set spending the rest of his life alone — until he meets Julian online. Julian’s everything Teague is not: creative, impulsive, enthusiastic — and commitment shy. When a voice on the phone and a face on the screen are no longer enough, can Teague convince Julian to take a chance on him in the real world?

All rights reserved.
Copyright ©2019 Willa Okati
Excerpt from Between You and Me

Ian never had trouble picking Daniel out of a crowd. He could have done it with his eyes closed and his ears plugged with thick puffs of cotton, and even if someone had taken him and spun him around in circles to make sure he’d lost his bearings. He’d still find Daniel, orienting himself toward the man.

He figured later he should have seen there was more to his focus on Daniel than just friendship, but no one ever saw anything clearly in the moment. At least Ian didn’t. He took long walks off short piers and jumped, knowing when he surfaced he could swim to Daniel standing on the shore. He couldn’t do anything else and still be himself.

That was okay. Daniel might keep himself anchored on solid ground, but he’d be there waiting for Ian. Always.

Ian figured he should have paid more attention to what that meant too.

He never thought too hard about it, though. Overthinking wasn’t his forte.

If anyone asked Ian why he did — well, most of the things he did — he never quite knew how to answer the question. How did a guy explain why he was who he was if the person asking couldn’t tell just by looking?

Ian didn’t think of himself as complicated. C’mon. He saw opportunities and went after them. He leaped before he looked, and by the grace of whatever gods looked after fools and man-children, usually came in for a smooth landing. When he didn’t, he picked up the pieces, stuck them back together, and got a move on before the glue had a chance to dry. He didn’t have a home, living in a series of hotels, and ate a home-cooked meal once, maybe twice a year, and his longest-lasting relationships extended through breakfast the next morning.

And yet — he loved his life. Mostly. Ninety-nine percent of the time. Maybe 95 percent.

Every now and then, though, Ian found himself in a place where he needed to be somewhere that was… else. Not the ends of the earth, the Alaskan Pipeline or the Foreign Legion, nor a bar where everyone knew his name. The place he needed to be: a tiny town with a crumb of California coastline, close enough to shouting distance of San Francisco but far enough away to see the stars at night.

So when he’d known this morning, after waking up alone one time too many, he’d had one cup more than “enough” for now, he’d tossed together a duffel’s worth of odds and ends, including an old Turkish coffee set he’d bought on a whim because Daniel would love it, paid up on his Portland suite through the weekend, and sweet-talked his way into a last-minute ticket on a plane down the coast, and —

And here he was, standing outside a library no bigger than a postage stamp, breathing deep of an intoxicating mix of roasting coffee, clean sea air, and the last sweet kisses of one of the final summer-warm twilights of the year. Content to be, there and then, putting off clattering up the stairs to the library’s second-story main entrance for the sake of saving up anticipation until he couldn’t take it anymore.

Good thing Daniel wouldn’t know he was watching, not with the doors of the café separating them. Ian didn’t often get a chance to stand still and look as much as he wanted, and he was a man who appreciated beauty even when planted in a half-parcel of parking lot, on the outside looking in.

Daniel had no idea he’d come tonight. Ian bet he’d be in for getting his ear chewed off; he laughed at the thought, not minding a bit. Besides, he’d tried to call. More than once. Let the surprise be on his own head; at least — Ian thought — it’d be a pleasant surprise. Meantime, he could take his time to relax, far and away from the race for gold and goal, and enjoy the view.
A good friend? Worth his weight in gold. Daniel? Worth his weight in espresso beans. Ian knew his friend well enough to be positive Daniel would prefer being described as such.

Ian hummed under his breath, content for the moment to stand still and watch his friend work.

Some kind of gorgeous man, that one, his Daniel. Silken-soft hair richer and deeper a hue than dark chocolate, long enough to curl around his neck and over his ears and tumble across his forehead in the humidity of the salt-rich wind off the sea. Startling blue-gray eyes, an inheritance from his father, were the first things that’d caught Ian’s interest way back when. Like the skies before a storm, with a thick fringe of sooty lashes. He wore a simple white shirt and dark gray slacks tonight, sleeves rolled up and two buttons undone, and when he reached over his head to wedge a fat blue book back into place on a shelf, he moved with the sort of grace, wholly unconscious, dancers only wished they could learn.

With all credit to the guy who wrote Fight Club, describing Daniel as beautiful wasn’t the right word, but it was the first word that came to mind. Funny how so few others saw it. Ian never had understood why they didn’t, and he’d given up trying.

Sometimes, when Ian stopped to think, he wondered if it was selfishness that he didn’t mind being one of the lucky few. Daniel deserved someone who’d love him tender and love him true, and at thirty-five, Ian could tell he’d started losing the thin edge of optimism he’d hung on to since his twenties.

He shook the mood, as insubstantial as cobwebs — usually — off, or tried to. Thirty-five wasn’t old. Far from it, and Daniel was the kind of man who’d age well. Ian looked forward to seeing it.

Odd, though… seeing Daniel from this angle struck Ian differently tonight. Almost always muted, the spark that set Daniel apart, something like a flicker of lightning in a cool dusky sky, came through crystal clear.

Some kind of gorgeous man, all right — and such a dork. Ian laughed quietly, fondly, absolutely sure Daniel had no clue he moved ever so slightly to the beat of his different drummer, or electric violinist, as the case might be, and the music fed through the trail of white headphones from pocket to ears.

No one could learn to be the kind of friend Daniel was to Ian. You were born to be that close to one another or not, and how Ian had been lucky enough to stumble across a guy who took him for who he was, charms and flaws and risks and rewards and everything else… eh.

Why tempt fate trying to figure out the whys and hows? He’d just be glad as hell and leave it there. Like always.

Ian tapped the toe of his shoe on the pavement, considering Daniel’s movements through the window.

Y’know what? Ian questioned himself. Anticipation is one thing. Delayed gratification is another. Neither stands much of a chance when I weigh them against a chance in a million to take Daniel off guard.

Decision: made. Ian hit speed-dial one more time for the fun of it, and then he hit the stairs, taking them two at a time, excited by the electric sparks that flickered to life in his veins.

Yes. This was what he’d come for.