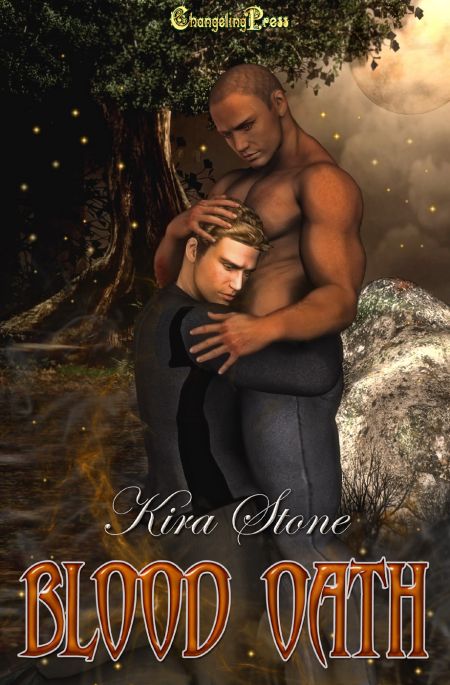 In Taggert’s Bend, the vampires love to hate the magical tricksters, and the witches hate to love the unnatural beasts. So, to keep the feuding to a minimum, the blood drinkers refrain from dining on the magicians as long as the gifted spellcasters occasionally share with them a fraction of their natural charms.

Blending the essence of the natural and unnatural has unexpected consequences when a new Vampire Lord is selected to endure the Blood Oath. Each attempt to successfully conclude the Oath only creates more chaos. Will these powerful enemies conclude the spell before an evil they fear more than each other consumes them all?

Lord Rainer Allen surveyed the action in the steam room. Naked, writhing bodies adorned almost every surface, perhaps twenty in total. Any one of them could be his sex partner. All he had to do was beckon, and they’d come running. Just thinking about it made him hard.

That’s where he had to stop. At thinking about it. To act on his urges would be foolish in the extreme.

Kassian nudged him with a toe. “See anything you like?” The vampire lay on his side, one leg bent up to give Rainer a good look at his nine-inch cock as he stroked it to fullness.

“Nothing I’m dying to have.” Rainer preferred men to women. He’d made no secret of it, but his openness sometimes worked against him. Kassian had been trying to seduce him since he’d transferred in from Eastern Europe. Seventy-four years was one heck of a long time to continually reject a very tempting offer.

“I’d be using them, and possibly hurting them in the process. They deserve better treatment than that.”

Sebastian’s arrival prevented Rainer from having to answer. The blond perched on the stone bench next to his husky lover. “I see you started without me.” He took over the stroking.

Kassian put his hands behind his head and interlaced his fingers, his eyes on Rainer as Sebastian turned putty into stone. “What took you so long?”

“Door alarm went off.” Sebastian kissed the inside of his lover’s knee.

Rainer watched the landscape of the black leather stretched across the blond’s lap change from a plateau to a mountain peak. Kassian alone was dangerous enough to Rainer’s self-control. When joined by his rough and ready live-in lover, the combination was kryptonite against his inner strength. Each time it got harder to resist their enticement. Tonight he might be foolish enough, and desperate enough, to take them up on it.

Hoping there was a crisis brewing so he’d have an excuse to dodge them a few more hours, Rainer asked, “Problem?”

“No, just a neophyte who couldn’t tell his ass from a hole in the wall. He’s so fresh out of the grave he still triggered the mortal buzzer.”

Kassian lowered the zipper of Sebastian’s pants, exposing a long white column of rigid flesh. “You should’ve taken the time to show him around. Maybe by then I’d have had Rani talked into fucking us.”

Rainer stiffened in more ways than one. “No. Not going to happen. End of subject.” His denial probably would have carried more weight if he hadn’t been drooling over the sight of Seb’s cleanly shaven balls. Kass was one lucky vamp to have such a fine lover in his bed every night.

Sebastian knelt beside Rainer, brushing against his arm. Rainer closed his eyes, both fearing and desperately eager for whatever the young vampire would do next.

A velvet soft caress of his nipple sent a shaft of heat to his groin. Again and again, the head of Seb’s cock rubbed over his sensitive nubbin. Rainer sat on the stone bench, boneless, and let him toy with danger.

“Let us fuck you, Rainer. We know how to take care of you. It’ll be okay, I promise.”

“No.” But the word meant nothing. Even as he spoke, his traitorous hand was gliding up the back of Sebastian’s thigh. He grabbed the blond’s firm, rounded buttock and guided him into a faster rhythm as the youthful vamp continued to fuck Rainer’s masculine tit. Such a little thing, but it was more than he’d permitted any other being to do in a long, long time. It felt so good.

Kassian approached from the other side. He cupped Rainer’s straining shaft. Just holding it in his cool fist. Rainer fought against the strong urge to thrust through it as Kass said, “Trust us. Seb did some research on the Blood Oath and its effect on Vampire Lords. He has it all figured out.”

“We know the risks and accept them.”

Sebastian scooped Rainer’s black hair away from his neck, exposing his throat. He placed dry kisses along the cords of muscle he found there.

No shit. Rainer didn’t need his inner guard dog to warn him of impending doom. If they pressed on, someone was going to get hurt. His friends might accept the risks, but he couldn’t. He refused to endanger them just because he was tired of his hand being the only one to jerk him off.

“Enough, guys. Stop. I mean it.” Rainer stood up, moving out of their range. He looked ridiculous given the way his erect penis jutted out. Nothing he could do about that here.

Kassian swore in a language so old that very few who heard the words would be able to translate them. “You’re a coward, Rani. I really thought you had bigger balls.”

Sebastian, equally frustrated, drummed his heels against the stone bench. “You don’t trust us.”

Seb had it wrong. It was the beast inside himself that Rainer didn’t trust. The Blood Oath he’d taken upon becoming a lord was both a blessing and a curse. The rite had imbued him with mystical powers which gave him more tolerance for sunlight, allowed him to consume less blood and heightened his senses, among other benefits.

The downside of the oath was that no one, not vampire or mortal, could withstand prolonged exposure to his bodily fluids, nor he to theirs. He had no choice but to obey its demands, a slave to its requirements above and beyond his own. If he didn’t heed the warning, he’d black out for hours, as long as a whole day. Those who tried to cheat the system too many times risked death, the kind a vampire could not recover from.

The single exception was to find the one person nature had assigned as his mate. His soul mate. The one person in a world of billions who could tolerate his touch. His kiss. His intimate embrace. One person Rainer knew didn’t exist in Taggart’s Bend.

He rounded on his companions, determined to get the message across so they would stop trying to cheat the system and accept his limitations. “If trust and desire were enough, Seb, you’d be on your back right now with my cock buried so deep inside you it’d tickle your nose. If affection meant anything, I’d be begging Kassian to suck me until I came so hard he’d choke on it.”

Even a simple kiss posed considerable risk. A tongue-tangling, soul-sucking kiss. He missed the intimacy of those more than all the rest combined. Another admission Sebastian and Kassian wouldn’t understand so he didn’t bother to make it.

He pushed the thoughts of unfulfilled desires aside and finished what he had to say. “If you care for me at all, help me look for the one person in the whole freaking world who isn’t poison to me instead of spending your considerable brain power on how you can circumvent it.”

The room was very quiet when he got done talking. He glanced around and realized he’d been shouting. None of the witnesses to his outburst would meet his eye, except for a lone figure hovering at the archway leading out of the hot moist chamber. A face he didn’t recognize. Rainer stared at him until he turned his back and walked out.

Fuck. Rainer started toward another exit leading to the dressing area.

Kass continued to peel his lover out of his leather encasement as if nothing untoward had been said. “Where are you going, Rani?”

He needed some time alone, a distraction. Anything to get his mind off his raging erection. “To find the ingénue. Maybe he’ll have a problem I can solve.”

Kira Stone lives in a warm cave tucked away in the remote Scottish Highlands, where a small band of ever-changing heroes serves as company. As they relax in front of a roaring fire, demons dance in leather pants and angels stroke tunes from the harp strings, while the Fae stop in to share tales from other worlds. Bound by pen and imagination, these are the folk who wait to greet you from the pages of Kira’s stories.

The who and what of Kira in this more mundane world is not what turns you on, but the words sure do – so go discover the passion that awaits you between the covers of every Kira Stone book…