Brianna finds herself hurtling through space married to a sexy alien –
with a very flexible tail! 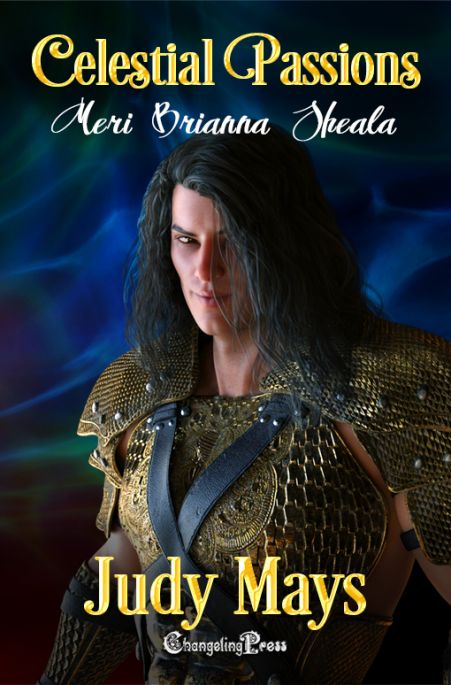 Thousands of years ago, the dols and the orcs disappeared from the aquatic planet of Mediria because the three races refused to stop warring with one another. Their departure in huge space ships so shocked the Medirians, Aradabs, and Nissians that the three races immediately ceased all hostilities and vowed to work together to find the dols and orcs and bring them home.

Meri: When Lillalistross don al’ Ademis of Drakan, the planet orbiting the Medirian sun exactly opposite Mediria, returns a kidnapped child to the Aradab, the tattoo on his chest catches the attention of Princess Merilinlalissa. Meri is convinced the tattoo, his clan totem — a dol leaping from the waves of a rolling blue sea — is connected with finding the dols and the orcs, and she’s going to find out how. The fact that he’s tall, handsome, and very sexy only makes her more determined to discover all she can about him.

Brianna: Brianna does what any decent human would do — she rescues a pair of aliens her boss is about to dissect and gets them back to their spaceship. Captain Alalakan don al’ Cardadon isn’t about to let Dr. Bakom conduct his ridiculous sexual experiments on an inhabitant from a newly discovered world, even if it means he has to marry her. Besides, he wants her — in his bed, on the floor, against the wall, and anywhere else he can think of. Brianna finds herself hurtling through space married to a very sexy alien — with a very flexible tail — from a planet where hedonism is the norm, and there are three sexes — male, female, and hermaphrodite. But Dr. Bakom wants Brianna, too, and he is willing to do anything to get her back.

Sheala: The virile lion man with golden hair, tufted ears, and an Alalakan dragon tattoo on his shoulder fascinates Sheala. Hoping Marljas will heal her physically and mentally, Sheala initiates the blood ritual that would bind her to him forever. The fire he ignites in her soul does much, much more.

“Men are idiots!” Meri growled as she stomped down the long hall toward her parents’ private apartments. Vibrant murals of ocean creatures leaping among foaming waves adorned the left wall of the corridor while on the right a soft, salty breeze wafted through the open, floor-to-ceiling windows and swirled amongst the gauzy blue-green curtains.

“Surely you aren’t talking about me, Coz?”

Stopping abruptly, Meri spun around and glared at her cousin. Then, after shaking her head and mumbling a curse under her breath, she launched herself against his chest and wrapped her arms around him. “Ban! When did you get back?” Leaning back in his arms, she cocked an eyebrow and stared into his handsome face. “And you know very well you aren’t an idiot. You may be a scoundrel, a womanizer, and an unrepentant drain on the royal coffers, as Grandmama likes to say, but you are not an idiot.”

His grin widened and he bussed Meri’s cheek. “If you hadn’t been complaining about men, I’d blame your snit on Grandmama. What’s wrong? Every servant I’ve encountered is tiptoeing around like there’s a wet Gattan in the palace.”

Pushing herself out of his loose embrace, Meri tucked her hand under his arm and led him down the corridor at a much more sedate pace. “Oh, it’s Grandmama’s fault all right. She refuses to acknowledge that I’ve abdicated my status as heir to the throne, has stated it’s time I married and has told Tendallis Davenet that he is the perfect consort. What’s more, she told him that Father completely agrees with her!”

A short bark of laughter exploded from her cousin’s throat. “Tendallis Davenet? That pompous imbecile? Why him?”

Meri ground her teeth. “Because his family is old and has royal blood in their ancestry. Something like ten generations ago, one of the daughters married the fourth son of the king, which, according to Grandmama, makes Tendallis the most logical choice for my husband. Not ten minutes ago, that pompous moron accosted me on the beach, patted my hand and told me not to worry my pretty head about governing Mediria. He’ll take care of all that. I’d only need to raise the children.” Meri snorted. “As if he’d have any idea how to govern our peoples!” She snorted again. “As if I’d allow it! He’d have us at war with both Varce and Gattan in a week’s time. But it doesn’t even matter, damn it! I am not going to be Mediria’s next ruler! Why won’t Grandmama believe me?”

Pulling Meri to a halt, Ban turned her to face him. “Because she refuses to accept that everyone won’t bow to her wishes. Calm down, Coz. You’ve abdicated and your father and the Council have accepted it. Ignore Grandmama. I do.”

After staring into her cousin’s grinning face for a few seconds, Meri felt her lips twitch. As usual, he was right. She was getting worked up over nothing.

He cocked his head to the side and chuckled. “Besides, you wouldn’t have made a very good queen anyway. You spend too much time thinking about sex. Are you sure there isn’t a bit of Drakian blood somewhere in the royal line — other than mine, that is?”

Without warning, Meri punched Ban in the stomach and got a great deal of satisfaction watching him double over. “Bandalardrac Hardan! Just because you’re half Drakian and obsessed with sex doesn’t mean anyone else in the family is!”

Hands on her hips, Meri watched her cousin cough and wheeze as he stood doubled over with one hand braced against the wall. More than once she’d rued the day that she’d cornered her cousin with some very specific questions about sex, but he’d been the one person she knew would answer her honestly. Sure, she could have asked her mother, but somehow she didn’t think the current queen of Mediria would be very comfortable talking about sex toys.

Ban, on the other hand…

Shaking her head, Meri once again forced herself to admit Ban was the best-looking member of her extended family. Her cousin Bandalardrac was a very attractive man — too damned attractive for his own good. Even without the tail his Drakian relatives possessed, half the women on two planets wanted him in their beds, and, according to gossip, he’d been in most of them. Who better to ask about kinky sex?

She pursed her lips. Was Ban right? Did she think about sex too much? It wasn’t like she’d had all that much experience. Being a Medirian princess made casual sexual relations hard. There was always the chance her partner would begin to get ideas about becoming her consort, and she had yet to meet a man who she’d even consider marrying. Her grandmother’s choice was definitely unacceptable. Oh, Tendallis was handsome enough by Medirian standards, but he was also pompous and arrogant. She could never marry a man who thought he was better than almost everyone else.

Ban’s voice pulled her from her musings. “By all the seven hells, Meri,” he finally gasped. “Who taught you to punch like that?”

She snorted. “I spent six months with the Aradab Matriarch. She said I needed to learn a few things.” Meri didn’t even try to keep the satisfaction from her voice. Grabbing Ban’s arm, she pulled him forward. “Come on. Father and Mother will want to know you’re back.”

Sexier than a Hollywood starlet! More buxom than a Vegas showgirl. Able to split infinitives with a single key stroke!

Look! At the computer!
It’s a programmer!
It’s a computer nerd!
No! It’s – Judy Mays!

Visit her website at http://www.JudyMays.com or join her reader’s group at http://groups.yahoo.com/group/judymays