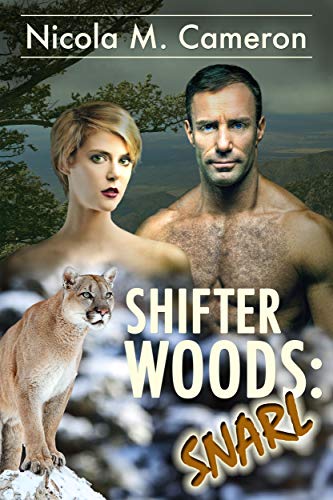 Can a lone wolf shifter woo and win his very own kitty girl, or will he get turned into cougar chow?

Jack Hawthorne is an Alpha wolf shifter and former SEAL who lost the leadership of his pack while serving his country. Kate Chandler is a cougar shifter with no sense of smell and a deep-seated distrust of fated mates. When these two are thrown together at the Cougar Ridge Ski Resort in Esposito County, NM, Jack realizes that the sharp-witted, beautiful female is his heart’s mate. But her injury means she can’t smell the truth, and her father (and Jack’s former commanding officer) has made it clear that Kate is off limits.

Now, Jack has to convince Kate that they’re meant for each other, win her father’s approval, and convince the local wolf pack to accept him. But as every SEAL knows, the only easy day was yesterday.

If you’re on the fence about buying Shifter Woods: Snarl, go right ahead and one-click. You won’t be disappointed. There’s enough heat between Kate and Jack to ignite your e-reader, but there’s plenty of story to go along with it. If you like sexy, determined shifters who go after what they want, then you’re going to love this book. Alpha wolf Jack is determined to win his mate, but he’s willing to do whatever Kate needs, even if it meant he’d have to walk away. They were perfect together. Not to mention, who can resist a mouthwatering SEAL who happens to be an Alpha wolf too? Ms. Cameron did a wonderful job with Shifter Woods: Snarl and I’m eagerly awaiting the next instalment in the series.