Shifter Forces Agent Holt Rainmaker is beyond pissed that he was captured. It was supposed to be an easy mission. Draw out The Collector, then arrest his sorry ass. The last thing Holt expected was to end up in a cage, but things aren’t all bad. If he hadn’t gotten captured, he’d have never found Bastian, the quiet shifter he knows belongs to him. He’d thought he’d never find his mate, but nothing could surprise him more than the blast of need that fills him when a pissed off grizzly comes to their rescue.

Agent Decker Stauder has seen a lot in his twenty years with the Bureau of Paranormal Affairs, but the case he’s been working on the last six months is unlike anything he’s tackled before. Shifters are going missing nationwide, and more are vanishing every day. Little did he realize that when he tracked down The Collector, he would end up finding not one mate but two.

Forty-three and married to his job, Decker never expected to settle down. But once he scents his mates, all bets are off. Not only is he claiming them, he’s going to bury the man who dared to cage his mates.

Pre-order for April 27th at:
Amazon, B&N, iTunes, and Kobo 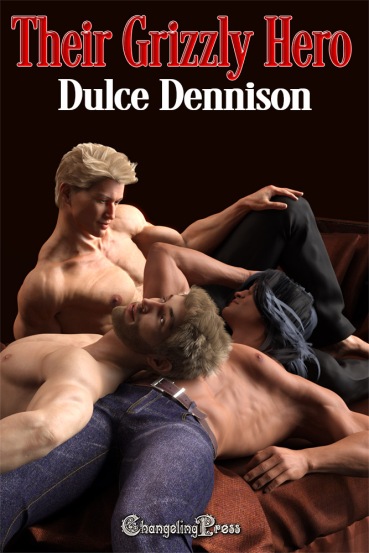 Holt groaned and slowly opened his eyes, wondering why he felt like he’d been buried under a mountain of boulders. His muscles twitched and ached, and a sour taste filled his mouth. As his surroundings came into focus, memories of the mission-gone-wrong slammed into his head. He growled as he stared at the bars encircling his cage. Reaching forward, he was about to grip the iron when a voice stopped him.

Holt retracted his hand and turned, seeing a form huddled in the corner. He approached, then halted when the man seemed to shrink even further. Whoever he was, it was apparent he’d been treated badly during his captivity. The last thing he wanted to do was scare the man even more.

“You won’t be given a choice, if you want to survive.”

“Bastian Bowers. And don’t ask how long I’ve been here because I don’t know. The days blur together. I lost count a long time ago.”

Was this one of the first shifters taken? Holt didn’t remember a Bastian Bowers being on the list. Was it possible more were taken than they’d realized, and their list was incomplete? Considering how many shifters they knew had been taken, the thought was staggering. He wanted to get closer, scent the male and figure out what was going on, but from the huddle form in the corner, he knew that getting any nearer wouldn’t be a good idea. Not yet anyway.

“It’s not like them to be sloppy enough to take an agent,” Bastian said. “Were you in the wrong place at the wrong time?”

“Something like that. I was bait, but it didn’t turn out the way I expected. None of us realized they were using magick to abduct people.”

“How exactly did you think they could kidnap an almost seven foot tall bear, not to mention all the other predators they’ve picked up?” Bastian asked, a bit of bite to his tone. “It’s not like they meekly went along.”

Holt ground his teeth together. He didn’t like hearing that he and his team had been incredibly stupid or knowing that more shifters might suffer because of it. The man wasn’t wrong though. They should have considered the fact someone was helping them, or that it was in fact a magick wielder who was kidnapping the shifters. They’d been so focused on the big picture of saving all those who were missing that they’d overlooked a few details. Really big ones it seemed. A rookie mistake that he was now paying for. His people wouldn’t stop until he was returned though, so there was that. He reached for the underside of his polo collar, feeling for the thin disc that had been pressed there before his mission, and realized his tracker had been removed. How the hell had The Collector even known about the tracker, much less where it was located?

“Have you seen the person who took us?” Holt asked.

“There are several people involved, of varying races,” Bastian said. “They have fae, witches, some humans. I’ve seen a variety of people since I was taken. Some come back more frequently than others. They like to torture us so don’t show any signs of weakness or they’ll use it against you.”

With an overactive imagination and a penchant for making up stories, was it any wonder Dulce Dennison decided to be an author? From cowboys to shapeshifters, she has a story for them all, but her passion lies in writing m/m romances. Dulce believes in love in all shapes and sizes, and that everyone deserves a happily-ever-after.