When Vicktor threatens Melena she pushes Valerian to rebel. But Valerian’s not a man to be mastered. 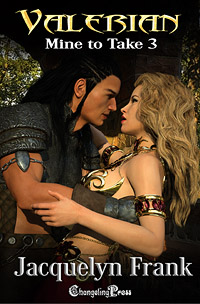 Valerian Jorku is second born heir to a massive throne overseeing the largest country in many lands, a country that is ever growing, thanks to his power hungry brother Vicktor, the emperor. But Vicktor is a cruel master and Valerian grows increasingly restless as he experiences his brother’s brutal nature and its effect on others.

Melena, a newly acquired slave girl he is conditioning to his pleasure, whispers nightly of his responsibilities to the people and how those responsibilities should outweigh his honorable intentions toward a brother who is clearly insane. Should he listen to this woman, sister to a rebel thorn in his side, or should he continue to honor his father’s last wishes and be Vicktor’s silent general, doing whatever he asks, no matter how wrong?

When Vicktor threatens her life and begins to turn Valerian’s women against him, Melena seizes the opportunity to push Valerian further in the right direction. But Valerian is not a man to be mastered. He is the one in control and ultimately it is he who holds all of their fates and futures in his hands.

Valerian Jorku looked down at his newest captive, Melena, and tried to use the sight of her to soothe his troubled mind. And yet she was the cause of some of his troubling thoughts.

She had said some things to him recently… things that plagued him. Comments about the dictatorial ways of his brother. Vicktor was a savage man. Not that he wasn’t intelligent, for he was frighteningly so. His brother had led his armies into wars that had more than doubled the size of the already vast Jorku nation. Although, in all honesty, it had been Valerian who had led the actual armies. It had been Valerian’s tactical know-how in the field that had allowed him victory. But his brother took credit for both his own achievements and Valerian’s. Vicktor was like that with all things. What was his was his… and what was yours was his, as well.

This was to say nothing of how he treated people as a whole in other ways. Vicktor was a cruel man with a vicious streak in him that ran a league wide. He had never met an enemy he couldn’t defeat, and that made him proud and arrogant, regardless of the fact that it was Valerian who had defeated those enemies. As far as Victor was concerned Valerian was simply a tool which he used with mastery.

Valerian had always known his place and had respected it. It had been given to him by his late father along with a plethora of other graces and wisdom. He had stayed true to his father’s desires long after his death. And one of his father’s desires was that Valerian never rise up against his brother. That he dutifully accept his place as second son and do all he could to support Vicktor’s rule.

But this woman… this slave… she had spoken simple truths to him, and he had listened as if hearing them for the first time.

“Your brother has no honor. You surely must see that,” she had said. “Perhaps by following his dictates you are betraying the people who died at his hand and in his wars. Did you ever think of that?”

Perhaps it was because she herself was a victim of his brother’s wars. Her country had been dominated by Vicktor’s armies, and now she was a slave. Her sisters were slaves. Her brother was forced into hiding and led a small band of rebels that had no hope of ever making a difference in the fight to regain independence from the Jorku nation.

She wasn’t a slave any longer, he argued with himself. She had been elevated to shisha, a woman of Valerian’s royal harem — an honor among women. And she was also his current favorite… a place of privilege within the harem itself.

From her perspective she was now being made to serve the man who had been the cause of all her family’s misery. Yet she was coming around. She had thought his predilections perverse and cruel at first, but he believed quite strongly that there was great pleasure to be found in pain and more so in the relationship that developed between a master and his shisha. Now she was coming around to his way of thinking. She was beginning to bend to his hand.

It was a war of sorts in and of itself — a far more personal one. One where he would one day be able to show his vulnerabilities to her and not fear that she would use them against him. He craved such a relationship. He craved a place where he could rest his head and speak of his troubles without fear of his brother hearing about it or fear that others would perceive him as weak for it.

Jacquelyn lives in the Western North Carolina mountain area around Asheville. After a lifetime of striving to be good enough to be published, she has enjoyed the many blessings her fans have rained on her with their loyalty over the years. With four sisters and other family scattered up and down the Eastern Seaboard, and a history of living all across the USA herself, she still always finds ways to give a nod to her native New York in her work.

Jacquelyn lives with her three “children,” a trio of domestic shorthaired cats whose personalities have often inspired aspects of her characters. A former sign language interpreter and substitute teacher, she is a powerful advocate of reading and writing. She is known for her persistent gifts of books to her nieces and nephews, as well as all the other children in her life, in an effort to see them love both as much as she does. She believes there is nothing more rewarding than the imagination and all it inspires, and nothing more tragic than illiteracy.