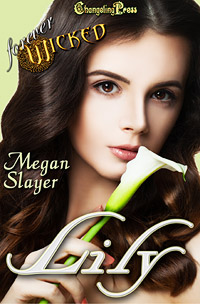 John and Michael never forgot how much they cared about their sub, Tiger Lily. She’s the one for them and they love playing with her. Now they’re ready to offer her their collar. No more waiting, they’re ready.

Tiger Lily wants both her masters, but she’s convinced they want a toy, not a full time sub. She decides to test them and makes them prove their devotion to her. It’s a risky game of swapped control, but if things work out the way she plans, they’ll all end up satisfied.

“Sit.” He turned on his heel. As Tiger Lily dropped to her knees on the floor, Peter shielded Wendy from her gaze. Something clinked and words were whispered between them. Shadows moved across the floor as Wendy left the room.

Moments passed and seemed like hours while Tiger Lily waited. She wished she’d kept her mouth shut and her aggravation to herself.

“Okay.” Footsteps padded on the floor beside her. Peter’s boots came into view and he squatted in front of her. “Michael and John will be here later. You’re going to have to be patient. I understand you’re hurting. They’ve been gone a while and played with another sub the last time they were here. I get it. But what happened is between the three of you. You’re going to have to tell them what you want. Change the contract, write up a new one, I don’t care, but leave me out of it.”

“Sir.” Tiger Lily couldn’t keep the pain out of her voice.

“I wanted you to choose me.” There. She’d said it. She loved Michael and John, but since they were younger she’d wished Peter would’ve chosen her over Wendy. Tiger Lily needed him. Didn’t she?

“Lily, my heart chose Wendy a long time ago. I’ve done things for her I never thought I’d do. I love Wendy.” He curled his fingers under her chin. “But John and Michael love you. They helped another Dom, yes, but they love you.”

“Then why don’t they tell me?” Tears streaked down her cheeks. She balled her fists. “I have no idea how they feel. I’m a toy to them, not a person.”

“Then ask them where you stand.” Peter stood and folded his arms. Wendy crept into the room and put her arm around Tiger Lily.

“Those two… sometimes you need to be specific with them. They think they know what’s going on. John’s so smart and Michael’s heart is so big, but they miss things. They love you, I’m sure, just as I’m certain you love them.” She brushed Tiger Lily’s hair from her face. “Make them earn your love.”

Sometimes she didn’t care for Wendy very much. Other times, Tiger Lily liked having another sub to get what she was going through. She knew her men, but now she truly understood them. Yes, they’d helped train another sub, but they still cared about her. Now she needed to show them exactly what she wanted, too.

“Thank you, Sir. Thank you, Wendy.” Tiger Lily nodded. She knew exactly what to do — make her men beg.

Megan Slayer, aka Wendi Zwaduk, is a multi-published, award-winning author of more than one-hundred short stories and novels. She’s been writing since 2008 and published since 2009. Her stories range from the contemporary and paranormal to LGBTQ and BDSM themes. No matter what the length, her works are always hot, but with a lot of heart. She enjoys giving her characters a second chance at love, no matter what the form. She’s been the runner up in the Kink Category at Love Romances Café as well as nominated at the LRC for best author, best contemporary, best ménage and best anthology. Her books have made it to the bestseller lists on Amazon.com.

When she’s not writing, Megan spends time with her husband and son as well as three dogs and three cats. She enjoys art, music and racing, but football is her sport of choice. Find out more about Megan and Wendi at: http://wendizwaduk.com/indexMegan.htm Sign up for the newsletter here: http://ymlp.com/xgjmjumygmgj