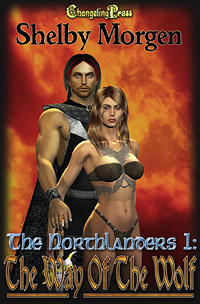 “You shall break my mind,” he whispered.

She slid slowly back down his rigid member, rocking back slightly as she enveloped him all the way to his balls. “I would own more than thy body,” she told him, reaching this time to flick her tongue over the tip of his right nipple. He thrust up into her harder. “I would have thy heart.”

He laughed, though a little breathlessly. “You already have it, M’Lady. You have owned me body and soul since I first looked up at you from my place in the mud. Do you not understand what Mael amin means?”

She raised herself up slowly to her knees again. “It is more than a pretty name?”

Her smile turned wondrous. “My heart. Mael amin. Ye have my heart as well, Mael amin.”

The chains of a fear he had not known he harbored fell away as he surged up into her hot, wet cunt. This time she made no move to withdraw, but rocked hard against him again and again, driving him home to the place where he’d always wanted to be — the place where he had but dreamed of being. His restraint broken, release came quickly, but not before she convulsed around him with a strength that threatened to shatter his sanity. It was his turn to hold her in his arms as hers lost their strength and she toppled to his chest.

“Mael amin?” Her voice was but a whisper against the quiet of the night wind.

“If ye would stay with me, then ye should know the truth.”

His lips quirked up into a slight smile. “There is more?”

Her tone remained serious. “I have been sent to House Yarishet for more than just simple negotiations. The House of Yarishet holds a talisman of import to House Lochinvar. This talisman was stolen from our house long ago. Still, I canna’ simply burst through the door and demand its return. To slaughter the entire house of Yarishet over a talisman would be in bad form. We would lose many political allies.”

Relief surged through him. If that was all… He dragged his tongue over the tip of her still darkened nipple. “Perhaps I can help you.”

Her breath caught in her throat, making her response a strangled sound. “How?”

His body was recovering already, wanting her more than he had ever imagined he could want a woman. The legends were true. She was as an intoxicant to him. “I have been often within the walls of the keep at Yarishet. I know the castle layout well.” As he indeed knew the layout of her body.

She smiled up at him. “Ye may well be useful in other places than beside me in bed.”

“Useful?” he mocked, nipping at her bottom lip. “Is that what I am to you? Useful?” His rigid cock pressed against her thigh.

He pinned her hands to her side, his body over hers, brushing her mouth with his lips again. “Allow me to entertain you again.”

“Ye shall entertain me to death,” she whispered.

Somehow, the words did not sound like an objection.

You can purchase this title at:

Praise for the Northlanders

“I could go on and on about how much I enjoyed the book, but seeing is believing! Go grab this book and let the heat begin and the addiction start. I for one am now addicted to Shelby Morgen’s books, which are oh so worthy of a look!”

“The action develops smoothly in this story with some surprises along the way. The sex scenes are electric with both leads characters being aggressive and strong. It’s a ride guaranteed to heat up the reader.”

Be sure to leave a comment on this post for a chance to win this free book – A Kiss in the Dark by Shelby Morgen! 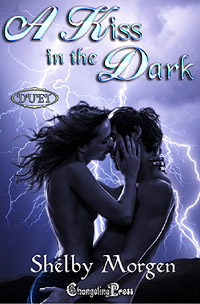 Night picked her up and carried her to the couch. She was awed by the fact that he could still lift her and didn’t fight him. When he sat and settled her in his lap, she sat stiff and unyielding.

Oran sat beside him and caressed her knee. “Baby, we want what’s best for you, and right now that’s letting us take care of you. And whether you want to believe it or not, you are our mate.”

“I’m not giving up my independence just because you’ve decided you need to ‘take care’ of me. I’m quite capable of taking care of myself. And what I haven’t been able to do alone, Griff has handled for me.”

Night growled. “He won’t be helping you anymore.”

“You can’t dictate who will and won’t help me. It isn’t up to you who I’m friends with. Griff has been there for me far longer than I’ve known either of you, and he’ll still be there for me after the two of you are gone. I’m not going to push him aside just because you’re territorial. If you don’t like my friends, get the hell out of my life and go harass someone else.”

“Baby, he didn’t mean it like that,” Oran said, trying to placate her. “It’s just, we want to be the ones to help you. You shouldn’t have to rely on someone else when you have us.”

She digested that for a moment. The baby was theirs so she supposed she could understand their feelings on the subject, but it didn’t mean she had to like it. She’d fought hard for the life she had, and wasn’t about to relinquish her independence now. Regardless of what they had to say, she was keeping her apartment. Despite their marks and their assurances, she wasn’t convinced she was their mate and she wasn’t going to throw away what she’d achieved in the past few years just because they’d decided to dictate her life.

“How about we compromise?” she offered. “I’ll let you help me some of the time, go to the doctor appointments with me if you’d like, but you won’t pressure me into leaving my apartment or shoving Griff out of my life.”

Night and Oran looked at one another before turning their gazes on her. After a minute or two, she had to fight the urge to squirm. Night’s gray eyes seemed to look right through her and Oran’s green gaze made her want things she couldn’t have. If she thought for a moment they loved her, she’d throw herself into their arms and gladly go with them. She knew it was ridiculous to think they’d love her after just one night. Even she wasn’t in love. Definitely in lust though. But that wasn’t enough reason to throw her life away and jump in with both feet into the unknown with two guys who were known for going through women. If the rumors were true, at least what she’d been able to pry out of her fellow waitresses at The Laughing Pig, neither had ever had a serious relationship and she wasn’t sure they were capable of it. And she hadn’t lied to them. Not knowing if she was their mate, she wasn’t ready to risk her heart. Just because they said it was so didn’t mean anything. They could be wrong, couldn’t they?

“Only if you agree that we have the right to change your mind,” Night said.

“Change my mind?” she asked weakly, having an idea what he meant.

He smiled. “Yeah. Change your mind.”

Before she could process what was happening, he leaned down and kissed her, his lips warm and firm against hers. Her heart fluttered in her chest as she sank her fingers into his hair. The voice of reason told her to push him away, but the little devil on her shoulder said it felt too good to deny herself the pleasure of his lips on hers. When his tongue invaded her mouth, she moaned and pulled him closer. The taste of him drove her crazy, made her want to do something rash, like take off all his clothes and lick him from head to toe, beg him to fuck her until she couldn’t stand.

She hadn’t been with anyone since her night with the two wolves, hadn’t wanted anyone else. They’d ruined her for other men with their intensity and passion. Sin couldn’t imagine being with another man. But some day, she’d have to get over that. Just not today.

As Night let her come up for air, she realized she was clinging to him like a vine and eased her grip. The look in his eyes was both hungry and tender as he smiled down at her. It was enough to make her want to burrow into him and never leave his embrace, but she had to be strong and stand her ground. She couldn’t be weak now of all times, couldn’t be swayed by kisses, even if they did make her melt.

“No way do you get to have all the fun,” Oran said, pulling her into his arms.

His lips claimed hers, bending her to his will. Where Night’s kiss had been tender and loving, Oran’s was full of fire. He drank from her lips as if he couldn’t get enough of her. His tongue thrust into her mouth, stroking hers before retreating only to plunge back in again. She wrapped her arms around him and held on tight, not wanting him to ever let go. She was surprised to see this dominant side of him, and liked it.

He pulled back, but didn’t release her. If they kept kissing her like this, she had a feeling she’d give in to them before too long. They were just too irresistible.