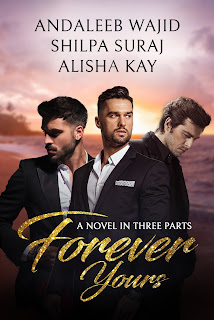 When a pretend engagement ends in a very real combined bachelor/bachelorette weekend in Goa, three couples find their lives going from chaotic to disastrous…

Hatefully Yours by Alisha Kay is the quintessential enemies to lovers story with a very interesting twist.
Aditi and Manan hate each other but love their mutual best friend, Karthik. Planning his bachelor party is a trip to hell sprinkled with accidental kisses that taste of heaven. Past misunderstandings, present attraction, and a future built on hope all tangles together to make this weekend one to remember.

Sinfully Yours by Shilpa Suraj is the story of a one night stand turning into nights that they hope never end.
Sidharth is Bollywood’s biggest hit-turned-overnight-flop. His best friend Sanjana’s bachelorette in Goa is the perfect place for him to hide out and drink his sorrows away. Until he passes out in the arms of the extremely hot pixie who moonlights as a bartender in a shack in Goa. And Dani is left with an armful of drunk movie star who is as messed up as he is hot.

Deceitfully Yours by Andaleeb Wajid is the story of what happens when a fake relationship starts to feel very, very real.
Sanjana and Karthik just wanted their parents to stop talking marriage to them. So, they faked an engagement and now their parents are not talking marriage but planning a wedding instead. When their friends throw them a combined bachelor and bachelorette party, they use the opportunity to plan their breakup. Except behind all well laid plans lies the path to disaster.

Three love stories, three oddball couples, one epic weekend in Goa…
Will they find their heart’s twisted path or focus on the brain’s straight-but-boring one? Will they gamble on their happily-ever-after or choose to leave Goa as they came, single and not ready to mingle?

Short Excerpt from Hatefully Yours by Alisha Kay

No! God, no! Not her! Anyone but her.
What the hell was Aditi Kedia doing here?
The minute he asked himself that, Manan could have kicked himself. Of course, she’d be here. She was Karthik’s friend, just as he was, and while Karthik was the smartest guy he knew, he was completely oblivious to the cold vibes between his two best friends. Or maybe he didn’t care. He wouldn’t see anything wrong in inviting both his friends together.
Something else struck him, and the biryani that he’d had for lunch threatened to make a second appearance.
His mother hadn’t told him anything about the girl that Karthik was supposed to marry. Just said that she was a friend of his. Was it Aditi?
Every cell in his body revolted at the idea of Karthik marrying Aditi. He told himself that it was because he didn’t want his friend to be ensnared by the evil little she-devil. It had nothing to do with the way his heart sped up at the very sight of her. Or the very inexplicable impulse that came over him occasionally to kiss her senseless.
Not that he ever gave in to such an impulse. He hated Aditi with all his heart. That’s all there was to it.
Alisha Kay writes funny, exciting and steamy stories, with spunky heroines who can rescue themselves, and hot, woke heroes who find such independence irresistible.
The first book in The Devgarh Royals series, The Maharaja’s Fake Fiancée, won the grand prize at the Amazon KDP Pen to Publish Contest 2020.

Short Excerpt from Sinfully Yours by Shilpa Suraj

Sid froze, the glass near his lips. “You certainly have a way with words and polite conversation.”
“Really? You are critiquing me on etiquette, Beach Bum?” She responded to someone hailing her from the other end of the bar with a raised hand.
“Listen, I’ve got to go,” she told him. “Work and stuff. You have a good night, okay?”
“Dani, listen.” Sid grabbed her hand before she could rush off. “When do you finish?”
“I finish at two in the morning,” she smiled. “Not exactly an early night.”
“I’ll wait,” he smiled back, something frozen in his chest thawing at the sight of her warm, beaming face. “Could we get something to eat and maybe chat or something?”
“I don’t ‘or something’ with guys I’ve just met,” she grinned.
“I threw up on you. You threw a bucket of water on me. I think we’re past first or even third date pleasantries, don’t you agree?”
Dani threw her head back and laughed, the same loud, warm laugh he remembered. The thawing moved on to melting.
“Alright,” she said. “Stick around. We’ll grab dinner during my break and chat.” She pointed a finger at him. “No ‘or something’.”
Sid grinned. Suddenly, ‘or something’ was all he could think about.

An avid reader with an overactive imagination, Shilpa has weaved stories in her head since she was a child. Her previous stints at Google, in an ad agency and as an entrepreneur provide colour to her present day stories, both fiction and non-fiction.

Short Excerpt from Deceitfully Yours by Andaleeb Wajid

Karthik stared at Sanjana as she stood at the jetty and it almost felt like the rest of the world had faded to nothing. He could see only her, as she stood there, stark against the background of the greyish water. He was still reeling from what his mother had just said about him and Sanjana but he was also trying to look at it realistically. He had been a child then. But surely, there had to be something about her, something that had drawn them together that fateful day when he saw her seated in the garden on his favourite bench.
Fate. It had to be fate, he told himself.

Andaleeb Wajid is the author of 27 published novels and she writes across different genres such as romance, YA and horror. Her horror novel It Waits was shortlisted at Mami Word to Screen 2017 and her Young Adult series, The Tamanna Trilogy has been optioned for screen by a reputed production house. Andaleeb’s novel When She Went Away was shortlisted for The Hindu Young World Prize in 2017. Andaleeb is a hybrid author who has self-published more than 10 novels in the past two years.