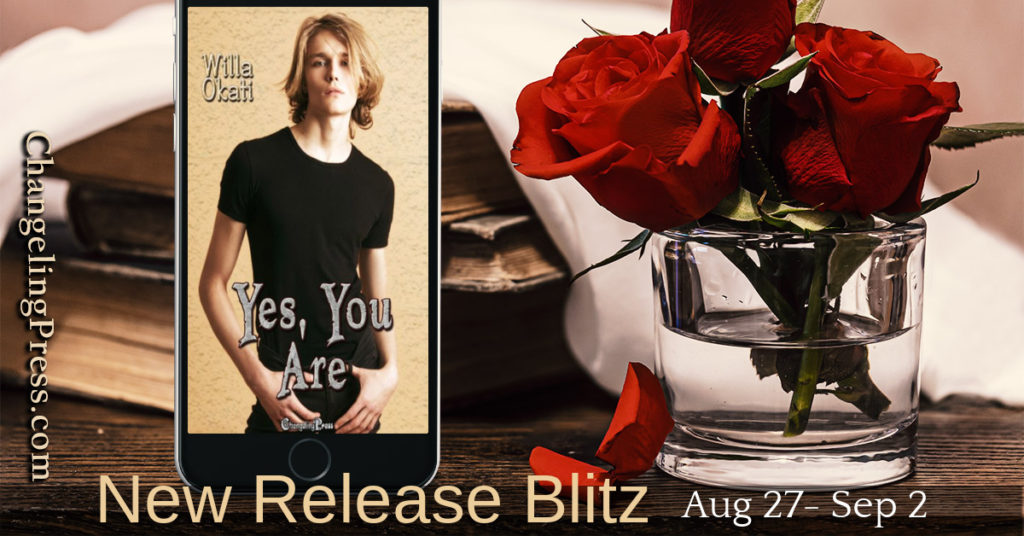 Title: Yes, You Are

Darian’s as unique an Alpha as Coby is an Omega, but opposites attract twice in Second Chance.

Everyone always assumed small, pretty Darian would be an Omega. He ticked all the boxes — except for the temper and the tendency to cuss a blue streak. But whatever, right? And everyone always assumed big, athletic Coby would be an Alpha. Just stood to reason — as long as you paid no mind to his tender heart. When they met in passing as teenagers, both boys had no reason to doubt that was who they’d be. Everyone said it, after all. But everyone was wrong.

When Darian and Coby meet again in grad school, Darian’s still small and pretty but he’s one hell of a ferocious Alpha — and tall, muscular Coby still struggles with having turned out to be an Omega. The college is short on space due to storm damage, and they’ve got no choice but to share living quarters and come to terms with themselves and their past — and when Coby gets pregnant, their soon-to-be future.

Opposites attract like lightning and steel rods when they meet again in Second Chance, but do they have what it takes to overcome the unexpected for the long haul?

Keys in hand, Darian was five steps ahead before he realized Coby hadn’t budged. He looked over his shoulder. “Well? Are you coming?”

Reluctantly, taking one more glance at the admins probably to make sure this was really happening, Coby unfolded himself. He was still half a foot taller than Darian, maybe more, and he’d filled out those lanky bones into wide shoulders and legs long enough to make a man want to try and climb him like a tree. <em>I mean — damn.</em>

But Coby didn’t walk like he used to, full of confidence. He sloped along with a slouching kind of gait that suggested bashful uncertainty, and the way he kept his head down indicated shyness, but the look on his face was nothing but pure, frustrated rage.

Darian couldn’t blame him. Hell, this was fucking with his head. He could only imagine how tangled up Coby had to feel about it. Coby, an Omega? Seriously? He made an even weirder specimen that way than Darian did in his, so what the fuck even.

Behind them, Oscar gave them a wry salute before turning to head for his single digs.

“Bastard,” Darian muttered before turning to give Coby a dose of straight eye contact. “This isn’t how I planned for things to turn out either, but since they did, we can either bitch about it or make the best of it,” he said bluntly. “So come on. Or don’t, but if that’s your call then I’m going to leave you behind. It’s not even noon and I am fucking tired. So?”

Coby looked like he was going to argue, then shook his head and fell into step. He tried to stay behind, act like they weren’t together, but his legs were too long not to catch up. When he did, Darian had the weirdest urge to take his arm. Just an urge, of course. An Alpha thing, a real throwback to the days when a gentleman would take a submissive’s arm to guide him. If he tried that now, fuck knew if this new angry Coby would try and break his elbow.

Darian didn’t do playing it safe, but unusual times called for unusual circumstances. He kept his hands in his pocket and his walk to an amble, and — again, not his usual thing — took a stab at small talk. Anything to calm Coby down before his head imploded. “You’re a teacher too, huh? No kidding. Makes sense, now I think of it. I don’t make sense, but I’d started the pre-classes before things turned out like they did, and I’d put in too much work to go back.”

Annoyed, Darian tried again. He hooked a thumb backward. “That was Oscar, a friend from back home. He can be a real douche sometimes, but deep down he’s pretty decent. A good guy to count on, in case you were wondering.”

Which Darian could tell Coby wasn’t. Too lost in his own head and his flinching awareness of every single person who paused to give them either odd or shocked looks when they put two and two together. Darian would have ignored those — he’d gotten used to them years ago — but being with Coby made him glower at everyone, daring them to make a deal out of it, and he could only do that so much before he gave himself a fucking migraine.

One more shot. “What are you teaching?” Darian asked. “I’m math. Calculus, trig, and basic algebra as I need to.”

Coby shook his head and kept his trap firmly shut, his head so far down that his chin almost touched his chest and yep, there went the temper Darian really did try to keep locked down. Didn’t help that looking at Coby made his mouth water and that pissed him right off because for fucks’ sake, his libido needed to mind its own business right now. The rest of him didn’t like the way the Coby he remembered had changed, and his being Omega wasn’t part of that.

He stopped in front of the big man, blocking his path, and lifted his chin. “Would you mind looking at me? And while we’re at it, what the fuck besides the obvious is your problem? It’s not like this is easy for me either.”

Coby glowered at Darian and shouldered past him, strong enough to jostle him aside.

Okay. That was really it.

Darian put on a burst of speed and shouldered past Coby in turn, minus the passive-aggressive shove, and walked in front of him all the way to the housing they’d been assigned. Not much to look at, just your basic small dorm. Still, his key worked on the front door and, down the hall, the quarters he and Coby would be sharing. God help them.

Which were not bad, actually. Darian’s eyebrows went up as he took it in. Roomy enough for two grown men to move around in without knocking elbows, decent closets, a closed door that was likely a private toilet. Even a mini-kitchenette with a sink, a cabinet, and space above a micro-fridge for a coffee pot and an illegal hot plate.

And of course, twin beds shoved in opposite corners.

Darian wrinkled his nose at them. “You’re not going to be able to fit in one of those. You’ll dangle off from the shins down.”

Coby shut the door behind them, and holy shit, Darian had not expected what happened then, nor had he noticed the near-total lack of airflow in there with the windows closed. His own Alpha scent wafted out in waves that completely failed to mask Coby’s Omega scent. Gunpowder and pennyroyal. They shouldn’t have gone together at all, but somehow they did and they gave Darian an immediate half hard-on that he was glad as all hell his loose shirt covered.

The Omega — no, don’t call him that, he’s more than just a gender — Coby — was looking at him now, boy howdy, his hawk eyes gone so wide that the whites showed around his irises. “You really are an Alpha. How?”

“You really want me to explain biology to you?”

Coby ignored that. “You don’t look like an Alpha.” He started to reach for Coby with one hand, then pulled back at the last second. Even so, Darian had the strangest sensation that he’d followed through. He could feel the warmth on his cheek. “You’re still little, and still pretty, and — look at me.”

“Equal,” Coby scoffed. He wrapped his arms around himself again squeezing tight. “Do you know the kind of shit I went through when I didn’t present, and when I did –”

“About the same kind of shit I did, I’d guess,” Darian retorted. “And if you’re going to have an attitude about it all summer –”

Darian sailed past that. Mostly because he was right. “If that’s how you want to be, then I’m setting some ground rules.” He ticked them off on his fingers. “If we can’t get along, we keep our mouths shut when we’re in the same room. No bringing anyone back here to fuck, and that includes me with Oscar — yes, we do fuck sometimes, because neither of us is all that sold on the standard rules. Find somewhere else or it’ll confuse everyone’s nose.”

Coby looked at him, shaking his head. “I didn’t ask for this. Any of it. I didn’t ask to be an Omega.”

“You didn’t get it, either,” Coby fired back. “And you know what? I don’t need your help. I can take care of myself. I didn’t ask to share with you.”

“No, the resident director or whoever-the-fuck he is did, so if you have a problem you can take it up with him, mkay?” It wasn’t that Darian didn’t feel any sympathy or empathy for the guy. Turning out not to be what you’d always thought was hard, right? Which meant something else needed saying. He held up a finger. “One last rule. No bullshit embarrassment. We are what we are, and we can’t change that. In here, neither of us has room to hide.”

“And you’d be damned if you even wanted to try,” Coby scoffed. He dropped his bags in a messy heap, a deliberate insult from an Omega. “So it’s really easy for you to say, isn’t it? I’m out of here. There’s got to be somewhere else.”

He stormed out, slamming the door with a bang behind him.

“Shit,” Darian said aloud. He rubbed at his forehead. Well, this was going to be a fun summer, wasn’t it? 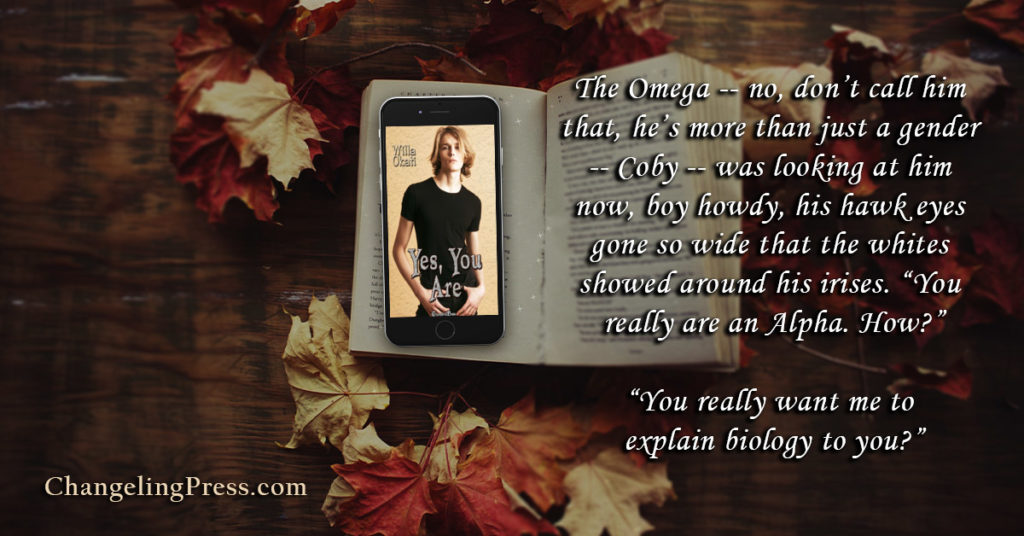 Willa Okati (AKA Will) is made of many things: imagination, coffee, stray cat hairs, daydreams, more coffee, kitchen experimentation, a passion for winter weather, a little more coffee, a whole lot of flowering plants and a lifelong love of storytelling. Will’s definitely one of the quiet ones you have to watch out for, though he — not she anymore — is a lot less quiet these days.