Series: Road to…, Book One

Rafi only wanted to spend a relaxing day in Tel Aviv with his lover, Mihi. When a bomb goes off outside the restaurant where they stopped for lunch, killing several people and leaving Mihi in critical condition, Rafi vows to catch the culprits and make them pay. Set on revenge, Rafi accepts an assignment to infiltrate a group of humanitarians to figure out which of them was responsible—and to stop whatever they’re planning next.

Mihi walked as though he was dancing, so smoothly my eyes couldn’t help tracking his hips as they wiggled so enticingly just ahead of me along the busy street. Dizengoff Street was one of the main shopping thoroughfares in Tel Aviv; the gigantic, two-story Dizengoff Mall took up two blocks on both sides of the street and was only a half mile away. We were on the end of the road closer to the beach, though, so we were surrounded by small shops and restaurants instead of cars.

The sidewalks were large, which was good because dodging daredevils riding their motor scooters was just one small part of walking in Israel. Another was dodging the water from dripping AC units hanging out of the apartment windows above every single shop. The third was dodging the stray animals and their leavings—Israel has a small problem with stray cats, mostly because there was minimal effort to contain the enormous population.

“How about this café?” Mihi called ahead of me, spinning gracefully on one heel to glance back at me. He saw the direction of my eyes and grinned impishly, twitching his hips again in a blatant invitation he knew I would eagerly accept when we returned to our private room in a nearby hostel.

But first we would have lunch and then we would spend the afternoon sitting on the beautiful beach watching the sunset. Then maybe we would take the long walk down to Jaffa for dinner, or maybe we could try a local falafel place. Falafel was the food of the Middle East, and Israelis knew how to fry up the chickpea mixture just right.

I followed Mihi into the little café, glad we were avoiding the chain café, Aroma, on the next corner. It was a relief to be inside, away from the heat of the day and the constant rumble of busses and honking of cars that filled Dizengoff Street to the brim. Mihi was already waiting for me at the counter, menu in hand and a grin on his face for my slower pace.

He was so beautiful, my Mihi, with his slightly curled brown hair flopping into his bright and happy brown eyes. His family was originally from the Romanian side of the Russian border before they fled the Holocaust and the Russian pogroms, so his skin was always just a shade tanned. He had managed to get the prominent cheekbones from his mother’s side of the family, which took a good bit of attention away from his father’s slightly hooked nose that sat in the center of Mihi’s otherwise flawless face. Mihi was perfect, and I couldn’t help smiling back at him as I joined him at the counter.

We ordered. Simple sandwiches because Israelis never ate truly large meals and therefore didn’t offer them even in a tourist-heavy area like Dizengoff. I followed Mihi to a table in the corner; it was right up against the glass window where we could people watch and cringe at the amazing stunts some of the drivers pulled to make their way through traffic.

Mihi took the better seat in the corner, where he could have his back to the blank wall and the entire window in front. I bent down to kiss him gently on the temple instead of taking the seat across from him.

“Bathroom,” I murmured into his ear before pulling away and heading toward the restroom sign in the very back of the shop. Mihi gave me another one of his impish smiles and waved me off. He was already setting out napkins so we could eat properly. One of the napkins fluttered to the ground as I pushed the bathroom door open, and I couldn’t hold back a tiny smirk. Mihi hadn’t noticed it yet, but I knew that napkin would be picked up and thrown away before I returned.

I took care of my business and was washing my hands when it happened. A loud thump made my ears ring. The building shook, the mirror in front of me cracked and splintered, plaster from the ceiling rained down on my hair, and then total silence.

I stood in front of the sink, the water still running cold and clear over hands, frozen in place. My eyes were wide in shock, hazel blue set in Polish-pale skin. My light brown hair was flecked with white plaster dust. My entire face motionless within the cracked frame of the mirror, waiting while my brain processed what I’d just felt and heard.

Suddenly, I could feel my lungs aching, and as if that were a signal to turn back on, my body gasped for air. I shook as I spun away from the sink, the water still running, and rushed to the door. I flung it open to total chaos.

The warped and blackened frame of a number nine Dan bus burned at the bus stop outside. Bodies and body parts littered the sidewalk, blood leaking from below the twisted metal.

The front window of the café was shattered, glass strewn across the floor. None of the tables and chairs in front of me were still standing and there were bodies everywhere.

The person sitting closest to the blast was missing most of his head. I gagged, but fought throwing up as I pushed through the mess back toward the small table in the far corner.

People were moaning, bleeding, and dead around me, but I only had eyes for a particular crumpled table and chairs and the bare leg clad in a flowery bathing suit I could see poking out beneath the debris.

No one by the window could have survived that blast. My heart batted away the thought even as my brain supplied it.

The leg was still bleeding, shrapnel wounds marring the lightly tanned skin. It was attached to a torso hidden beneath the table. I threw that table off with all my strength, dropping to my knees at Mihi’s side.

He was still breathing, my brain supplied. My heart decided it would keep beating for the moment.

Clutched in one hand was that silly napkin dropped to the floor just moments before. I have never been so happy for Mihi’s little quirks. He must have been bending over when the blast went off and had been protected by the wall at his back. The table and chairs must have shielded him from the worst of it.

Mihi’s eyes fluttered open, unfocused and glazed with pain. He immediately found me.

“Mihi!” I gasped, one hand reaching out to cup his cheek. His ear was bleeding sluggishly onto my hand, but his cheekbone was unbroken.

“Rafi,” he whispered in a cracked and broken voice. His eyes slid shut again.

Finally, I started to hear the sirens. People who had seen the blast were already trying to find the living, but they were still searching by the remains of the bus. All of them, from the helpers to the EMTs, were taking their very lives into their hands. Everyone knew the terrorists liked to set off one blast and then wait for the emergency crews to arrive before doing their best to destroy the ambulances and kill all the first responders—even more innocents dead to their horrible vendetta.

My Mihi didn’t have time for any of that foolishness. As one of the ambulances jumped the curb and drove onto the sidewalk I stood and started waving frantically.

“Here!” I screamed, frenzied and hopped up on fear and adrenaline. The driver saw me and pointed. Two men leapt out of the back of the truck and rushed over with heavy bags banging against their sides. They stepped directly through the empty window and dropped down at Mihi’s side.

One took Mihi’s vitals while another started pulling the remains of the chair and table away from Mihi’s body.

“Still alive,” the first one grunted in Hebrew, waving one hand for a woman setting up a stretcher to hurry over. They didn’t rush, but it wasn’t long before Mihi was strapped properly into the stretcher and was rolling off toward the ambulance. I followed along behind, like a lost puppy following his owner, and climbed into the ambulance behind Mihi.

Something in my face must have alerted the EMT woman already bending over Mihi, because she pointed toward a seat by the door. I took it and couldn’t help my flinch when the doors slammed shut behind me. 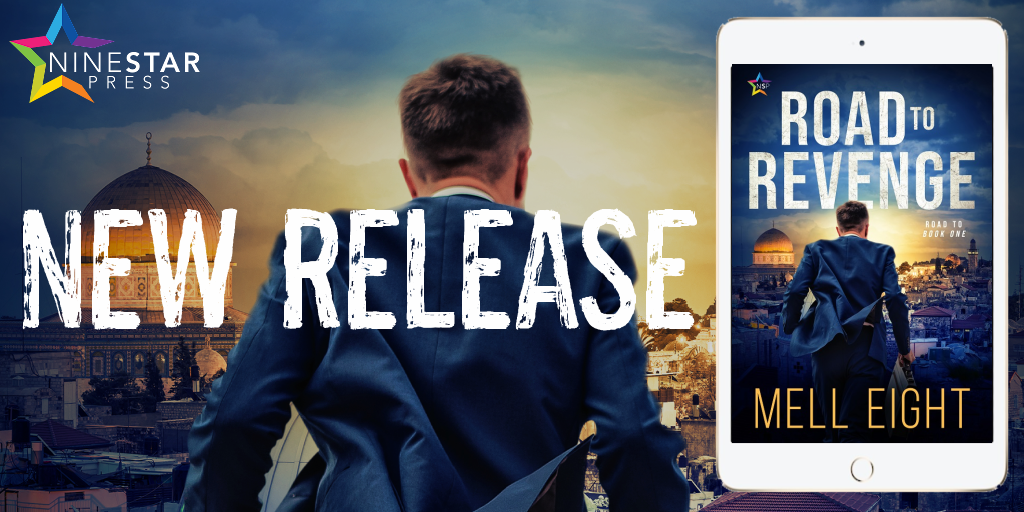