Mateo Harris, a retired Olympic Show Jumper, achieved just about everything he could want in life. Rising from a nobody to becoming a beloved gold-medalist, co-owning H&H Riding Academy with his cousin—and best friend—Emily Hall, and he’s one of the most powerful and respected men in his hometown of Sweetspire, VA. Nothing can shake the foundations of the life he’s built for himself. That is until he hears his nemesis and former crush, Christopher Wright II, has moved back to town.

Christopher, a runaway movie star, has returned to Sweetspire to inherit the family business: Wright Stables, the only rival riding academy Mateo has ever had to worry about. With Christopher’s charm, talent, and fame taking charge, Mateo is faced with real competition both in and out of the arena. He’ll have to be at the top of his game to prove he’s still the number one equestrian in town, but every encounter with Christopher becomes as challenging as any obstacle he’s faced on horseback.

Mateo Harris and his black Belgian warmblood soared over a post-and-plank obstacle, then galloped in a curve to face two gates in proximity. They leapt over both with swift ease. The final stretch sent them gliding over the triple bars as they completed the course in a flawless fashion.

Mateo’s students applauded from the fence where they each sat astride their own horses, the eagerness for a chance to try the course themselves apparent.

The solid thud beneath Mateo’s riding boots reverberated through him, a satisfying crescendo indicating the finale of his performance. He believed a rider should never consider themselves finished showing until they were no longer on horseback. Although he hated to admit to himself, the ache in his right knee also grounded him in the truth—injury and age.

Defying reality, and because of his inherent showmanship, Mateo pivoted his athletic body in one graceful movement to face his pupils.

“And that’s how you win an Olympic gold medal in show jumping,” he announced. “Any questions?”

His students applauded, and he grabbed the reigns to lead his horse out of the arena.

“Why can’t you still win them?” a snide voice rang out. “Maybe you could teach us how to not fall off our horses.” The comment, which referenced an injury he sustained at his last Olympic competition, came from a tall blonde girl, Payton Parker, who Mateo found irritating on any given day; this one especially.

Most of the students appeared to hold their breath after the bold insult as if all the oxygen of the pleasant Virginian afternoon had been depleted. Their wide eyes showed they’d never dream of saying such a thing to someone so well regarded. Known for his equestrian accomplishments in the city of Sweetspire, the waitlist to get into H&H Riding Academy—the school Mateo and his cousin, Emily Hall, ran together—was as long as his list of accolades.

A few uncontrolled giggles cropped up, and Payton smirked at him to show she found the power-play to her peers worth any repercussion.

Mateo pursed his lips and produced a warning smile as he approached Payton, taking his time to remove his black riding gloves finger by finger.

He addressed her but did so loud enough so the entire class would be sure to hear him. “Your parents pay me excessive amounts of inherited money to turn entitled leeches like yourself into professional equestrians. As if any amount of funding could ever supply you with the aptitude you so obviously, and painfully, lack. You’ll be lucky to ever win so much as a participation trophy awarded for anything other than nepotism. You’re hereby dismissed from this class, Payton. In fact, because I’m feeling particularly plucky today, you are expelled. Good day, Miss Parker. I’ll expect a call from your parents as soon as the nanny reminds them they have children.”

The same student giggles returned, this time siding with Mateo and proving to be as good as a slap in the face for Payton. Fuming, she coaxed her Hanoverian toward the exit of the outdoor arena. She shouted over her shoulder as she left. “There are other riding academies, you know! I’ll go to Wright Stables! I don’t need you to win a blue ribbon!”

“I agree. You need talent!”

Nothing made him see red faster than mention of Wright Stables, his only real local competitor.

He chided himself for being drawn into an immature argument with a spoiled teenager and moved to get his class back on task.

“If anyone else would like to be expelled today, please, negligently criticize me. Otherwise, run your courses!”

Mateo waved them off, and they rushed to begin taking turns practicing the paces.

He led his prized horse, Top Shelf, back to the stables and handed him off to a stable hand. Once out of the long corridor on the other side of the luxury barn, Mateo reached inside his navy-blue riding blazer, grabbed his flask, and threw back a swig of French vodka.

He took a deep breath of the balmy late afternoon air, letting the heat of the drink warm his chest and relax him.

He spotted Cameron Myers leaning on the fencing of a corral where he had a student practicing dressage basics. The lines from Cameron’s dancer’s muscles showed through his thin white shirt whenever he leaned forward on the railing, and he combed his fingers through his wavy chestnut hair as he shouted out instructions to the student for improvement. Cameron clapped his approval when the student followed his recommendation to the letter.

He’s a much nicer instructor than I could ever be. It’s a good thing I hired him, or my student body might be severely lacking in numbers.

Cameron raised an eyebrow once he turned to Mateo. “Little early for that, don’t you think?”

“I teach overly indulged teenage millionaires how to make an animal jump over brightly colored poles for a living.” He took another drink at the thought. “Every day is tough.”

Cameron chuckled and turned his attention back to his own student. “You know you love every minute of it.”

Mateo grinned, putting the flask away. “No, you love it. I just have an affinity for collecting dead presidents.”

“You know I don’t believe that for a second.” Cameron signaled to the young rider to start their routine over. “I wouldn’t be here if that were true.” 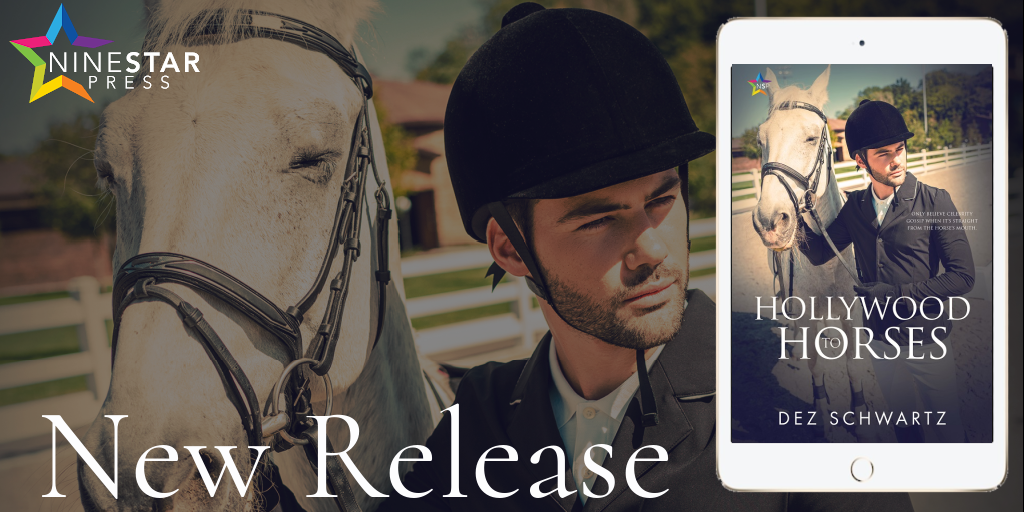 Dez Schwartz is a LGBTQ, Dreampunk, & Gothic Romance author and artist based in San Angelo, Texas. She holds a BFA in Studio Art and worked as a graphic artist, and a Director’s Assistant at a fine arts museum, before transitioning to writing full-time.

Her longtime love of Victorian spiritualism, gay literary fiction, and romantic comedies inspired her to begin writing all of the stories she wished existed.

When she’s not passionately crafting tales, she can be found drawing, researching, or traveling with loved ones.