Title: Give Me Grace

Taken in by the mysterious Sisters of the Order of Saint Raphael the Healer, Grace’s wounds are dressed and she is assured her memories will return—in time. But does Grace want her memories back? Maybe she’s chosen to forget them, maybe there’s a reason. The sisters hide things from her. They whisper things about her.

When a demon forces its way into the convent, it declares that Grace is a demon too. Grace demands answers. Answers that may reveal not only who she is, but that the sisters might not be who they say they are, either.

Give Me Grace
Bethany A. Perry © 2021
All Rights Reserved

Grace knelt on the kneeling bar, whatever it was the sisters called it, and folded her hands together behind the pew in front of her. She dropped her voice to a whisper. “Sister Monica.”

The novice nun kneeling beside her shook her head a millimeter, her curls almost bursting through her headscarf, and clenched her hands tighter. Her lips moved over a prayer, her eyes squinched closed.

Grace grinned and scooted closer. She did close her eyes, though, making a clumsy sign of the cross over her shoulders. An approximation, at least. Her inability to get it right exasperated the sisters on a damn near hilarious level. “Are we doing your coming-of-age ceremony today?”

Monica’s lips stopped moving, and she pressed them together. They didn’t disappear into nothingness the way the mother made hers do, but by the time Mon was Mother Mary’s age, she’d be able to do it better. She leaned, her umber skin mellow in the low light of the sanctuary, and whispered so quiet Grace had to listen with all she had to catch it. “Either shut up and pray or leave and meet me in your room.”

Grace swallowed, the blood rushing to her cheeks. “Sorry, Mon. I didn’t mean to upset you. I just wanted to take communion with you, if you were going to take your vows.”

Mouth dropping open, Monica turned to her. “Why would you want to do that?” Her voice echoed off the vaulted ceiling, the walls, and the windows, including the lone stained-glass window in the sanctuary.

One of the other sisters, Eliana probably, shushed. The shush was so sharp it may have cut the air as it sped across the cavernous room.

Monica stood, stuffing her rosary under her robes, and grabbed Grace above the elbow. She tugged, not unkindly.

Grace held her abs with one hand and stood. The twinge as she did brought back her first memory with force. The splat-splat-splat of her own intestines as they hit the floor of the hospital emergency room. Everything before that moment, including how she’d been gutted, was a deep well of nothing.

Her next memory, which was much nicer, was of Monica, sitting next to her hospital bed and assuring her that her full memory would return in time.

As the sanctuary doors closed, the chilly hallway enveloped them. The morning sun hadn’t had a chance to penetrate it yet, and the walls radiated last night’s cold.

Grace shivered and shook her head to clear it of the slapping sound her guts had made when they hit the tile. For all the good it’d do. “Sorry. I thought you were going to get your habit today and stuff. Take your vows. All that.”

Monica shook her head with a frown. “Mother Mary told me I’m not ready yet. I guess I have more study to do.” Still walking, she looked Grace up and down. “How’re your wounds?”

“Only because you help me.” She rubbed the scar below her stomach. “Glad we finally got the bandages off. How long have I been here again?”

“The Order took you in from the hospital about”—she drew out the u, squeezing her eyes closed—“six weeks ago?”

“Weird. I feel like I’ve known you a lot longer than that.”

They turned a corner, bright sun flooding the next hallway—Grace’s favorite hallway—dust motes dancing along the shafts, and stopped before the only other stained-glass window in the place.

Raphael the Archangel stood outlined in pinks and blues, gold shining all around his head and shoulders, what the sisters called his halo. His glowing hands rested on the heads of two penitents who knelt before him, their eyes bleeding.

Monica smiled. “The feeling’s mutual.” Cheeks tinged red, she crossed herself, curtsied to Raphael, and continued down the hall.

Grace cast a glance at the window. Raphael’s face wore an out-of-place expression of serenity while blessing two people who cried tears of blood. Despite the eyes, she found peace in the scene.

She caught up to Monica, running her hand through the two inches of hair on her head, the healing scar a line slashed through it. “That library is the darkest room in this convent. You’d think they’d want windows so you could actually see the words in the books.”

“The books are old, Grace. They’d react badly to sunlight. We’ve had this conversation.” She stopped, one hand on an enormous door handle. “Did you want to keep me company today?”

“I was serious about the communion, Mon.” Grace bit her lip. Six weeks’ worth of changing bandages and chatting and following her around the convent made Grace feel close to Sister Monica. Like a real friend. This ceremony was a Big Deal to Mon, and Mon was a Big Deal to Grace. It only seemed right to do it with her, even if she wasn’t Catholic.

Monica eased the creaking door open. “I’ll speak to Mother Mary.” With the hand not holding the door, she brushed her fingertips along Grace’s cheek.

Grace’s heart tripped a beat. Something about the way her fingers moved like butterfly feet made Grace lose her breath.

“Thank you. You’re a good friend. I hope you’re still here when I take my vows.”

Brows knit, Grace peeked into the library. She lowered her voice. “Where would I go? I don’t even remember who I am, much less where home is.”

Monica shrugged, her robes shifting with a soft sigh. “If your memory comes back, you’ll probably want to leave.” She sucked a sharp breath over her teeth. “Not that I don’t want you to get your memory back. I just meant—”

“I know. I hope I’m still here too.” Grace smiled, lips stretched tight. “If I remember who I am before then, I’ll come back just to share your communion. Okay?” 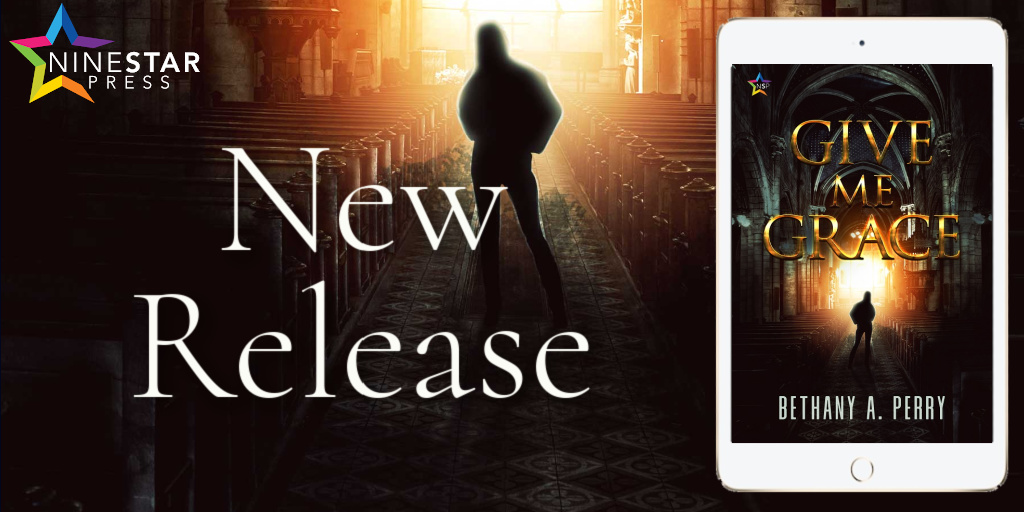 Bethany is a southern transplant in the west, where she’s made her home with her kids, partner, pets, and several hostages…er…houseplants she hasn’t killed yet. Poetry was her first love, and she’s been writing since she could hold a pencil. Horror is her sweet spot, but all things sci-fi and fantasy are also deeply entrenched in her heart.