After a bad breakup, Rasheed is determined to spend his last year of high school focused on his course work and to finish it with as little drama as possible. But when disaster strikes and his grandma ends up in the hospital, the threads holding his life together start to slowly unravel. Now, Rasheed has to deal with the return of his absent mother and sharing a home with her despite their strained relationship.

With old hurts surfacing and family dynamics shifting, Rasheed finds comfort and humor from his best friends, the Herman twins he’s tutoring, and his crush, Adam Herman, who’s not as unavailable as Rasheed had once thought. With more time spent together, Rasheed finds his feelings for Adam may never have gone away. And the feelings may not be as one-sided. Except, Rasheed has to confront old mistakes and come to terms with his own issues first, and a relationship may just complicate everything.

Chapter One
“Please tell me it’s mahamri,” I said enthusiastically when I saw Granma kneading dough that would hopefully be rolled, cut into little squares, dipped into deep frying oil, and covered in whipped cream to create a slice of heaven. Paired with hot chai, it opened the door to another dimension.

Granma pounded the dough, one-two, and flipped it over. “It is.”

“Should I start on the tea?”

“You should start by taking the trash out.” She straightened, wiped the thin film of sweat from her forehead, and pointed to the overflowing trashcan. I could have emptied it last night, but I had an assignment due and each second counted; the four minutes it would have taken had seemed like a lifetime.

“Okay.” I stepped farther into the kitchen and pinched some of the dough. Granma smacked my hand with her flour-covered one. I should have seen it coming; it was a dance we’d been doing since I was five­­—I’d pinch the dough, she’d slap my hand, and warn me about worms making my stomach swell.

I refrained from rolling my eyes. The way she used to tell it, when I was a kid my stomach would get as large as a balloon before it burst, spraying worms everywhere.

I tossed the dough in my mouth, grabbed a pot, filled it with water, and put it to boil for tea. One thing Granma and I liked was tea—tea in the morning, tea in the afternoon, tea before bed—and coming to America hadn’t changed that. As soon as she was done with the mahamri, she’d set herself up on her favorite floral armchair in front of the TV with her cup of steaming hot tea and catch up on some daytime soaps. Sometimes I joined her—TV dramas had some really cute guys.

“They finally gave up the dog,” Granma announced.

“Mrs. Kyle and that dog. The pepo chafu will not be terrorizing us again.”

Mrs. Kyle lived on the other side of the street, one house down from us. Her bulldog, Teddy—a name that maybe shouldn’t be handed out so easily to slobbering dogs—had the bad habit of chasing and attacking people, and she refused to put it on a leash. Granma did not like her. The whole neighborhood didn’t like her.

“Paul was right,” she continued, “Soon as someone threw in the word ‘sue,’ she became more accommodating.”

There’d been a lot of that lately—Paul this and Paul that. It would have slipped my mind if I hadn’t noticed her FaceTiming him two weeks before, and then a day ago. Paul only lived a fifteen-minute drive away, so why not text? Anyway, what was so important that she needed to video call?

“I’m guessing some are for Paul?”

She pulled a drawer open and retrieved a rolling pin. “Why are you saying it like that?”

“It’s nothing— Okay, you and Paul are…friendly,” I teased.

“I don’t have many friends; another one never hurts.”

“True, but I don’t know many people who go around fixing other people’s houses out of the kindness of their heart.”

Granma fixed her eyes on the dough and started to roll it. “It’s called kindness. Looks like you’ve forgotten the meaning of the word.”

“I remember,” I said quickly before it turned into a speech about undugu. Yes, yes, love thy neighbor, unless it was Mrs. Kyle, of course. Lines had to be drawn somewhere.

I added a cinnamon stick and some ginger into the pot and turned to head back to my room. Granma pointed to the trashcan. “Usitume nikwambie mara ya pili.”

Right, the trash. I sighed.

Her eyes bored into me as I bent to pick it up, which usually made me more self-aware. Like, had I brushed my teeth or cleaned my room? “I don’t know where your mind is nowadays.”

I was still trying to shake off summer vibes and find my back-to-school rhythm. It wasn’t going great. On top of the mound of piling homework and the early waking hours that turned me into a zombie—sometimes even with growling, and on really bad days, I could bite someone’s head off—I was trying to dodge Scott, my ex-boyfriend. Whenever he weaved his way into my thoughts, my chest would burn with shame, and my body would turn into a bundle of nerves. That chai and mahamri better come quick. I needed a pick-me-up.

“You put your shirt on backward on Tuesday and didn’t notice.”

“My mind was elsewhere.”

Her eyes narrowed. “And you’re not on drugs?”

I refrained from sighing. “No, I am not on drugs.”

“Why? What do you have to stress about?”

I slumped. Things were off, and I couldn’t shake the oddness. Before I could get that out, Granma shuddered, exhaled loudly, and reached for the counter, clutching it tightly.

I moved toward her. “You okay?” But she waved me off.

Her mouth opened, closed, opened again, but nothing came out. I frowned in confusion. Finally, after a few seconds, she said, “Trash.”

“And check for your keys.”

I shifted my eyes to her hands, still gripping the counter and repeated, “You okay?”

Her words were labored and breathy. She had been pounding away like an MFA fighter. Maybe that was it. Now I knew what I’d get her for Christmas—a stand mixer. Maybe that would encourage her to make mahamri more often and not break a sweat while doing it. I could do it, but I’d never gotten them right—soft and sweet but with a tinge of lemon and overwhelming taste of coconut. Mine usually came out too hard.

I lifted the bag and headed outside.

“And water my herbs for me.”

I huffed. I ought to have known going to the kitchen when Granma was there meant a one hundred percent chance I’d come out with a chore.

“Am I hearing you grumble?”

“Good because that would be disrespectful to your elders.”

I held back the eye roll and made my way to the garbage bins. I dumped the trash and went to water her plants.

Granma had raised-bed planters for her herbs that Paul had made for her. The day he did it, Granma had prioritized keeping him company to watching her TV dramas even though she was religious about not missing episodes. Then there was that time Natalie had been over for their book club—they were the only two in the club, and they read one book a year, spent five minutes talking about how they didn’t get a chance to read it, and gossiped the rest of the time—and I overhead Granma describe Paul as a fine, fine man. Sure, there had been some wine involved, but still.

I winced when the scent of mint made me think of Scott. He loved mint-flavored ice cream and chewing mint-flavored bubblegum. I’d made it another week successfully avoiding him—thank you crowded hallways and different schedules. It was exhausting. I was constantly in flight mode. There had to be another way.

Apologize, a voice echoed in my mind. Apologize? As in, like, say sorry and stuff? Hmm.

Not that I hadn’t thought of it before, but how did people do that? The idea sounded foreign. Save for when I stepped on someone’s foot or bumped into them by accident; that was easy because they were accidents. Honest mistakes. What I had done had not been an honest mistake. So how did someone apologize for dumbness?

It was easier to stay clear of him, avoid any more drama, and focus on school.

“Eedy!” I paused, spooked by how she sounded—like a rusted engine trying and failing to come to life. As I put the watering can down, there was the sound of a body hitting the floor with a soft thud.

My heart leaped into my throat, and my stomach twisted with dread.

I rushed back to the house and found Granma lying on the floor—flat on her stomach and still as a rock. The world tilted and blurred together.

“Granma?” I said in a shaky whisper. I fell to my knees and with weak arms managed to turn her over. My breath caught at the sight of her. Her dark eyes were wide open, unfocused, and unblinking. A chill snaked down my back. I leaned down and felt her warm breath on my face. Oh, thank fuck.

I grabbed her hand and recoiled at its limpness. “Granma, are you okay?” Of course, she wasn’t okay.

“Tafadhali amka!” Please get up. I tried to pull her up and failed. Granma wasn’t small, and despite my size, I couldn’t get her to move. My pulse started to race and a heavy weight pressed down on my chest; breathing became difficult. I gasped for breath.

No. No. It would be alright.

The hope I’d been holding on to sank somewhere to my toes. “No, Rasheed. Eedy.”

Musa was my babu’s name—my grandfather—a man we’d silently agreed to never speak of, ever. To Granma, saying his name was equal to calling on the devil, which wasn’t that far off from the truth.

I needed to call for help. She lay on the floor, immobile, her empty stare on me. I did not want to leave her. My eyes blurred. I stood on shaky feet and rushed to get my phone still buried under books from last night’s homework rush. My palms were sweaty enough it took a few swipes before I hit dial on the emergency contact. The person on the other end promised the ambulance would be coming soon.

I returned to crouch next to Granma and took her hand. She slurred something unintelligible that I failed to understand. “They’re coming.” I squeezed her hand.

She grumbled. It sounded like a mangled animal. I blinked to keep the tears from falling, but that only made them fall harder.

“Itsfine,” she slurred. Her hand twitched in mine.

Last time she had ended up in hospital, it hadn’t been fine. Three weeks after I turned eight, and the world had turned upside down. I fought off the gnawing helplessness and tried to cling to positive thoughts. It would be alright.

Granma would be alright.

She didn’t really have a choice. She had her dramas waiting for her, Christmas was a few months away—Granma loved Christmas, all those sales and store decorations hyped her up—and I was going to graduate from high school. 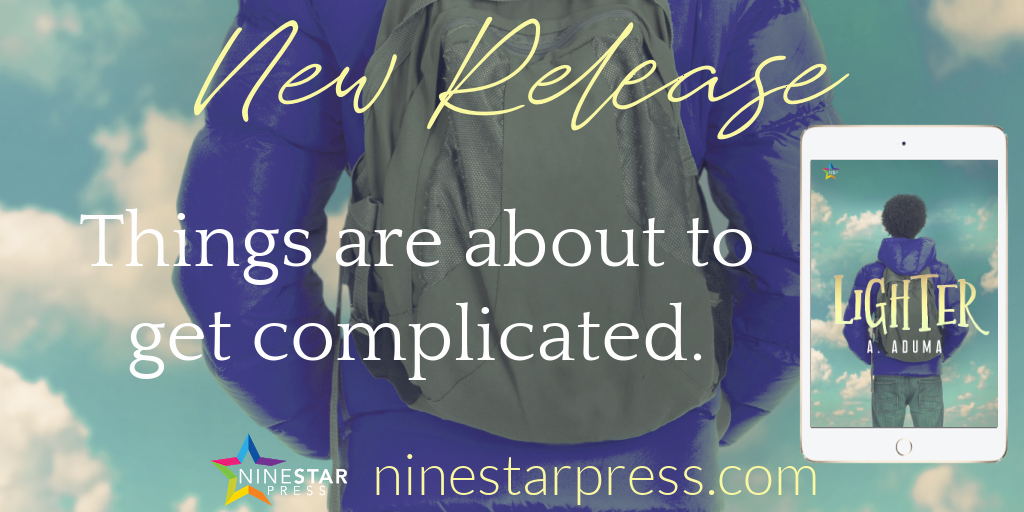 Aduma is an economics major at the University of Nairobi in Kenya, and the type of person who feels incomplete without a book in hand. When not reading or writing, Aduma can be found lost in spreadsheets and graphs with music for company. Follow A. on Twitter.