Alexandria Van Kirk has always been a slave to her romantic nature. When a night of liquid courage lands her in bed with one of her best friends, Alex is confronted by a host of feelings that terrify her. Feelings about her friend and, unexpectedly, a barista from her favorite café.

It’s a tug of war between heart and body. Desire against all her daydreams of someone to share silence, sunsets, and coffee with.

But Alex’s past is also about to catch up with her. Tortured memories and the girl they’re all about. It’s like fighting the pull of a whirlwind. A surefire losing battle. But embracing a newfound romance amid the return of an old flame is a precarious balance, one not even Alex herself is sure she can manage.

How the hell does she choose between the girl she loves and the one she could never confess loving to begin with?

It had been brewing for weeks.

Alex supposed it didn’t matter how long. Tensions between her and Ryan had reached a boiling point. Her body thrummed with quiet unease as vodka scorched down her throat and seeped through her veins. She shouldn’t have been drinking this much. What had she eaten? A few chips and maybe half a dozen gummy bears? No wonder the liquor had gone to her head so fast. It was sort of a nice buzz though—enough for her to feel a little less inhibited but still be aware the creepy guy she’d met earlier had been trying to talk her into a dark corner for the last ten minutes.

She leaned against the doorframe, gaze weaving through the mass of sweaty bodies dancing in the living room to land on Ryan.

Ryan tossed her head back in a laugh, grinding on some random guy who was more than happy to have his hands all over her. Her red, ruched dress rode up her thighs with every move. She flipped her jet-black hair and swept it all to one shoulder as her eyes landed on Alex, a smirk lingering on her lips.

Maybe it wasn’t the vodka.

Maybe it was the fact that Dom had crammed more than fifty people into a house meant to accommodate three for the riot he called a birthday party. God knows Alex didn’t go to these things for fun, but Dom was her oldest friend. She loved him way too much to not show up for his birthday, even if she was as close as any technology-obsessed millennial to becoming a hermit.

The guy—what did say his name was?—leaned closer, pulling her attention to his gangly, unattractive form. “So, do you want to maybe take a walk down to the park?” He stared at her expectantly, sweaty red strands of hair clinging to his forehead. As if she was going to be lured into the park at midnight to be groped by some guy who resembled a ’90s crackhead.

“Do you know what Einstein’s definition of insanity is?” she asked.

“No. But being this close to you definitely drives me crazy.”

Alex rolled her eyes, pushing him out of her personal space. A spot to herself to wait out the night. That’s all she needed. The one she’d been standing in had been perfect. Until now. Her gaze flittered across the room where Ryan had been dancing only to land on strange faces. “Damn it.” She started forward and bumped her way through the teeming living room toward the kitchen.

Doubling back, she tried scanning every five-feet-something girl who had dark hair. It hadn’t occurred to her before how many girls fit the criteria. Still, it would only take seconds to process that this girl’s hair was a few shades too light; that one’s skin wasn’t pale enough. Another was wearing a nearly identical dress, but the arch of her back didn’t seem quite right. Ry had a bigger ass.

Alex halted at the sight of Ryan sitting hunched over in a loveseat across the living room. She pushed her way through the dancefloor. “Ry?” Alex tilted her head slightly. “What’s wrong?”

Ryan peered up, eyes glossy and gleaming as she grinned at Alex. “Nothing.” Her head fell to her lap again.

Alex drew her brows together. Nothing really appeared to be wrong with Ry besides her being a little tipsy and possibly playing an adult version of peek-a-boo. She slid into the free space on the couch and shifted at the press of Ryan’s thighs against hers. Proximity wouldn’t do much to resolve her internal conflict. It sure didn’t soothe the thought that even sitting there with this thing between them still simmering was a terrible idea. She forced it down. “Tell me what’s wrong.”

“Ry…come on.” Alex nudged her, pressing her forehead to the side of Ryan’s face to provoke her into lifting her head again.

“I got a little light-headed. I’m better now.”

Ryan turned her head, her lips brushing against Alex’s. “Promise.”

Alex’s breath caught, her pulse climbing. The heat… It wasn’t the vodka or the party being too crowded. It was them. A million red lights went off in her head. Ryan was one of her best friends. Risking that would be stupid and impulsive, and they’d both had too much to drink.

Ry dragged in a deep breath, and their lips brushed again, and Alex’s hesitance burst into spectrums of green. She leaned forward, taking Ryan’s lips in a gentle kiss. Slow, timid almost, as if they were both afraid to react too much. To react more than the other.

Was it good or bad that Ryan had kissed her back? Even with all the weird tension between them, she’d never imagined how acting on it would feel. Some lines weren’t meant to be crossed. Now that she had, she craved more of Ryan’s lips on hers—soft and yielding.

They jerked apart as a girl bumped into them, spilling the last few drops of her drink onto Ryan’s lap. The girl giggled and offered a barely coherent “Sorry” as she stumbled away.

Ryan stood, Alex following as Ryan weaved her way through the crowd almost aggressively, forcing people out of the way with her hands to clear a path.

Ryan rounded the corner at the end of the hallway leading out of the living room.

Alex quickened her steps. As she rounded the bend too, she noticed Dom’s bedroom door had been opened. She took a tentative step inside. “Ry? Are you in her—”

The door slammed, and Alex turned. Ryan backed into it with a thud, pulling Alex against her, their lips pressed against each others. Alex’s hands found Ryan’s hips, and she squeezed. Everything from her grip to the way her teeth latched onto Ryan’s bottom lip was a confession. There’d be no stopping now. Not unless Ryan came to her senses and pulled away. Deep down, Alex was pleading for that to happen before things went too far, before their bodies admitted every word their lips refused to speak. 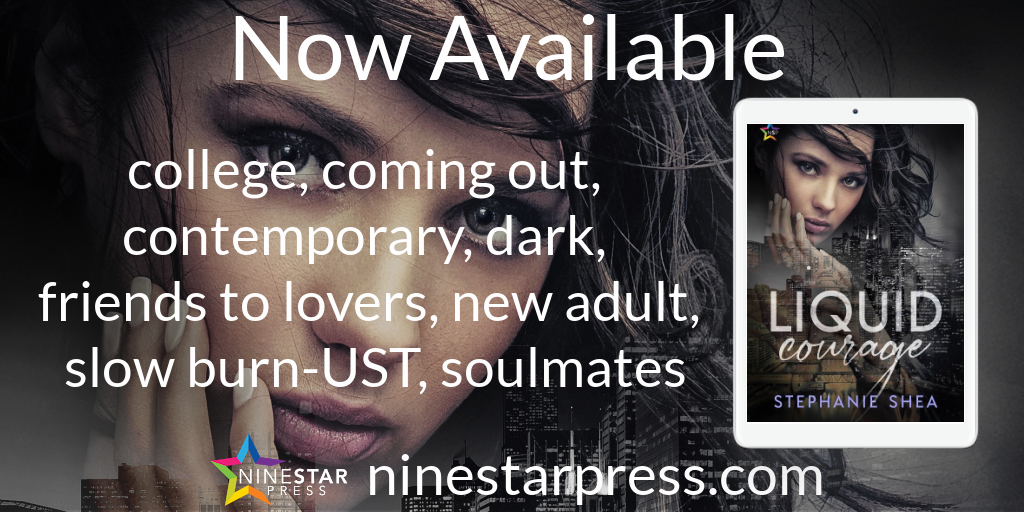 Stephanie Shea is a self-proclaimed introvert, who spends her days as a banker daydreaming of becoming a full-time novelist. Her mind’s fixation on characters and plotlines date back to high school when she’d find herself scribbling notes on her first novel instead of paying attention in calculus. These days, she reaches for a Post-It in her desk when inspiration strikes.

Her favorite things include binging tv shows, creating worlds where no character is too queer, broken or sensitive, and snacks. Lots of snacks.

Someday, she hopes to curb her road rage, and get past her anxiety over social media and author bios. Find her on Instagram.