With paintbrush in hand, Nate Redfield takes a city full of ugliness and makes it beautiful. His quiet, empty life is a refuge from a harrowing past, and although he has nothing to love, he also has nothing to lose. Standing up to the syndicate is a good way to end up with a hole in his head, but Nate is not afraid to die.

For once in his life, he’s going to do the right thing, even if it kills him. And it probably will.

But the most dangerous criminal in the city—a man whose sadism and ruthlessness have become local legend—decides to spare Nate’s life. On the streets, Ras is a cold-blooded syndicate enforcer, and makes no apologies for it. But he pursues Nate with a tenderness like nothing Nate has ever known. While no amount of violence could compel Nate to betray his moral compass, love leaves him defenseless.

The vibrant portraits Nate paints tell every story but his own: a lost little girl who thinks of him as a father, a lawyer who tempers justice with compassion, a crime boss and an art thief, and the killer who stole his heart. Ras offers him the love he’s yearned for all his life, if only he is willing to close his eyes to the violent truth. But his story is not one of compromise. It is the story of an indomitable spirit, rising like fire from the ashes of his past.

Nate Redfield knows he’s going to die. He’s known it for a while now—woken up with it, gone to sleep with it, held it near to his heart. It’s not suicide, not exactly, but it might as well be. He might as well be putting a gun in his own mouth when he pushes open the doors to the Cat Scratch, the seedy strip club where Alan DiCiccio conducts his business.

He walks past the stage, strippers swaying, sliding their G-strings down their long, supple legs so a handful of men can spend their Friday afternoon appreciating the view. The bouncer at the back of the room gives him a nod and steps aside so he can push open an unlabeled black door and walk into what serves as DiCiccio’s office. Behind him, the bouncer’s heavy footsteps follow, and then the door clicks shut.

“You’re late,” DiCiccio says. “I hope you’s got some extra cash to make up for it.”

DiCiccio looks Mafia, through and through, with a New York accent and an unnecessarily formal black suit. But he’s not Mafia. There is no Mafia in this city, only the syndicate with a monopoly on crime and the muscle to keep it that way. DiCiccio works for them, so Nate does too. Or he did, anyway. Until today.

“I quit,” he says, and with those two words, his heart begins thumping, fast and heavy like someone’s banging the hell out of a snare drum in his chest.

“You quit?” DiCiccio leans forward over the scattered cash and bags of white powder on his desk to stare at Nate. “You fucking quit?” He looks up at the bouncer. “Bobby, am I hearing this shit right?”

“He said he quit,” Bobby responds. He’s a tall, beefy guy with stubble and a couple of big gold rings Nate imagines he wears just for the scars they leave on his victims. “You heard him right.”

“Okay…” DiCiccio draws the word out. “I’ll humor you, Nate. Why the fuck do you think you’re going to quit sellin‘ for me?”

Nate is silent for a moment, gathering his courage. “’Cause it’s wrong,” he says, standing still to give away no hint of the fear scrabbling inside him like some desperate animal.

“Oh, it’s wrong, is it?” DiCiccio puts his hands behind his head, leaning back in his chair. “You think it’s wrong, Bobby?”

“That’s right. It’s your fuckin’ job. Which I gave to you as an especial favor to my friend Troy. And now you come and you throw it in my face.”

“You told me the pills wouldn’t hurt anybody,” Nate says. “You said they’re not real drugs, and it’s not gonna hurt anybody that bad. But that’s not true. And I’m not gonna do it anymore.”

He thinks of the girl who used to buy from him every Tuesday, dark eyes, a bitter laugh. She was found dead from an overdose just a few days ago, and since then, Nate has been building his courage for this confrontation. He’s not going to walk away alive. But better him than another person like her.

“Nate, look. I like you; I really do. You’re a nice guy. But you come here and you tell me you’re not gonna do your job, and you really leave me no choice. You get what I’m sayin’?”

“No.” DiCiccio shakes his head. “I don’t think you do. What I’m sayin’ is that you get out there and you do your fuckin’ job, or Bobby here’s gonna have to fuck you up.” He puts his elbows on the desk and leans forward. “You understand that?”

Nate looks at the glinting rings on Bobby’s right hand, so thick and heavy he might as well be wearing a pair of brass knuckles. Nate’s not afraid to die, but he wishes it wasn’t going to hurt so much.

DiCiccio shakes his head sadly and glances at Bobby, jerking his head at Nate.

Bobby nods, solemnly, like they’re making a bank transaction—not playing around with someone’s life—and that just pisses Nate off.

A hot wave of anger crashes over him, and as Bobby approaches, he lunges forward, driving his fist into Bobby’s gut and then bringing a knee up hard between the hitman’s legs. Bobby makes a sharp, wounded noise, going to his knees, and Nate drives a hard kick to his ribs. He’s been in enough fights to know how to move and how to make sure the other guy isn’t getting back up anytime soon.

It’s not DiCiccio speaking, but a low melodic voice Nate’s never heard before. He steps back from the groaning thug on the floor and looks up. A man stands in the doorway, his messy dark hair falling over his forehead, and he smiles at Nate. It’s the damnedest thing, this smile. It doesn’t fit the situation at all. It’s the kind of friendly, amused smile he might give Nate if they were walking their dogs in the park and the leashes got tangled together. It’s strange and surreal and almost familiar. And the adrenaline is stretching seconds into minutes into hours and highlighting every detail of this man who—Nate somehow just knows, from his arrogant stance and the tilt of his chin—now controls every aspect of the situation.

“Who would like to explain to me what’s going on?” the man asks.

“Jesus fuckin’ Christ, Ras,” DiCiccio says. “Make a little noise next time you walk in a room, you sneaky bastard.”

And Nate freezes, his earlier fancies iced over with fear because this is Ras, second in command to the syndicate boss and meanest motherfucker in the whole city. He’s heard a lot of talk about Ras—anyone who’s spent time in the criminal underworld has. The gossip rags love him. Their stories are sensational and exaggerated, but the rumors Nate hears on the streets—tales of sadism and deadly skill—make him think there is some truth to them.

“DiCiccio.” Ras doesn’t sound happy to see the drug dealer. “What’s all this?”

“Motherfucker attacked me,” Bobby moans as he picks himself up off the floor. “The little faggot fights dirty.”

Nate winces. He’s used to that word, but it still wounds more deeply than any other.

“He attacked you, did he?” Ras sounds unamused.

“He thinks he can quit,” DiCiccio says. “He comes in here givin’ me some bullshit story ‘bout how what we do is wrong, and he’s just not gonna do it anymore.”

The corner of Ras’s mouth twists upward, and he glances at Nate. “What we do is wrong. I can hardly fault him for being honest.”

“I’m not doin’ it anymore.” Nate’s mouth feels dry and sandpapery as he waits for Ras’s response.

“Fuck you,” Nate growls, anger coursing through him so hot he doesn’t feel the fear anymore—it’s burned away like a paper shell around something hard and relentless as iron.

DiCiccio raises his gun in one sallow hand. The bang of the gunshot is so loud Nate can almost feel it, a tangible burst of pressure. But nothing hurts. Nate looks down and is startled to find himself intact.

DiCiccio drops the gun and stumbles forward, collapsing on the carpet. A pool of red seeps out from under his head, a bright spatter painting the far wall.

Ras has holstered his gun, but clearly, he can draw so fast he may as well still be holding it. He turns to Bobby and raises an eyebrow.

“I swear to god I had nothing to do with it,” Bobby says, backing away as Ras approaches. “DiCiccio was the one who stole from you. I told him not to. I told him!”

Nate’s not stupid, he knows this isn’t going anywhere good. So while Ras pulls a little knife from his pocket, he darts out the door, sprinting for the parking lot. He draws in a shaky breath when the sunshine falls over him, so bright and carefree, but he can’t spare even a trembling second because he’s got to fucking run for it. He zigzags through alleyways, ducks into stores, and indiscriminately boards busses and trains, traveling across town in the wrong direction for a couple of hours before he feels safe enough to get on a train headed home.

He’s not an idiot—he knows that in this town, no one can watch a syndicate enforcer do a hit and walk away. He’s probably only delaying the inevitable, and as he watches the shining city outside the windows of the train, he wonders if he’s ever going to see it again. It seems fraught with fragile beauty, the blinding splashes of light reflected in storefront windows and the metal of the cars streaking by on the interstate.

In his entire life, he has only ever had one true love, so it makes sense that as he nears the edge of his lifetime, he has only one regret. He left her behind because he had no other choice, but he could no more stop loving her than he could stop his blood from flowing through his veins. And even when his heart has beat its final rhythm, that love will endure. He knows that much is true, even as he believes in nothing else. 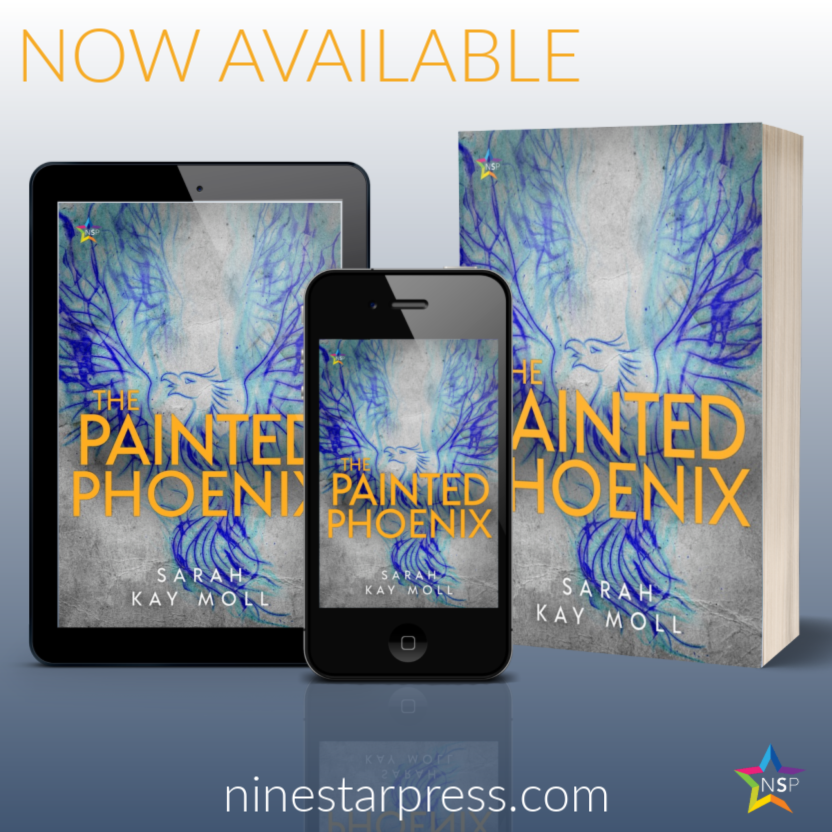 Sarah Kay Moll is a wordsmith and an amateur homemaker. She’s good with metaphors and bad with coffee stains, both of which result from a writing habit she hasn’t been able to quit. She lives a mostly solitary life, and as a result, might never say the right thing at parties. She’s passionate about books, and has about five hundred on her to-read pile. When she does go out, it’s probably to the library, the theater, or the non-profit where she volunteers.

Sarah lives in a beautiful corner of western Oregon where the trees are still changing color at the end of November and the mornings are misty and mysterious. She spends her free time playing video games and catering to her cat’s every whim.