Series: A Williamsville Inn Story (can be read as a stand alone)

What happens when a confirmed hook up app user falls for a man who is his polar opposite?

Carter Walsh will be alone on Valentine’s Day, and his plans include a candy sampler of hook ups.
But after learning about the Cupid Crawl—a bar crawl covering a half dozen bars, gay and straight—he changes his plans.

During the crawl, he runs into:

An ex-co-worker nemesis who resurrects—loudly—an unfortunate nickname she bestowed upon him years before.

Several hot men eager for a quick hook up.

And one man absolutely not Carter’s type, but who manages to pique his interest and, possibly, steal his heart.

The Cupid Crawl is a funny, sweet, and steamy opposites attract, slight age gap story that takes place in the Williamsville Inn series world, and features characters from the Christmas stories “Snowflakes and Song Lyrics” by Hank Edwards and “Snowstorms and Second Chances” by Brigham Vaughn.

The organizer, Vic, led the way, squeezing past the men and women standing in the doorway and forging a path for Carter to follow. At first, Carter thought he was way overdressed. The men he slid past were shirtless, some wearing just white loin cloths or even cloth diapers along with feathered wings strapped around their broad chests. These men gave him a brief glance, maybe a quick smile, but were busy talking to each other or women who were also baring a lot of skin. Didn’t these people realize it was February in Boston?

When he reached the bar, Carter was relieved to see people wearing shirts and pants instead of just diapers and short shorts. Vic leaned in over the bar and said to the bartender, “Don, this is my good friend, Carter. Put his first two drinks on my tab.”

“Happy Valentine’s Day, Carter,” Vic said. “The first two drinks are on me to help you relax. I’m going to make a round of the bar, but when I return, I hope to find you talking with someone, and not just leaning on the bar all alone.”

“I know how to socialize,” Carter said.

Vic winked again before threading his way through the crowd, greeting people as he slid past them. Carter ordered a beer from Don, and then fished a couple of singles out of his wallet for a tip. He lifted his bottle to salute Don and had just taken a swig when a piercingly high voice shrieked from just behind him. The sound startled him so much he choked on his beer and started to cough. He turned, coughing and sputtering, and squinted through his tears at the woman standing behind him.

Auburn hair done up tall, bright green eyes that could be nothing other than colored contact lenses, a pert, upturned nose, and a broad mouth filled with teeth laser-whitened to solar flare level.

Carter’s heart stuttered with surprise and dread as he struggled to clear his airway.

“I saw you walk in and had to come over and see if it was really you!” she exclaimed.

With a final clearing of his throat, Carter managed a smile and said, “Lizzie. Hello! What a treat to see you.”

Lizzie’s smile widened even further and she crossed her arms. It was then Carter noticed she wore what looked like a sports bra with a pair of white wings strapped to her shoulders, and a sheer white shift around her waist that showed off a pair of black panties trimmed with lace.

“As I live and breathe,” Lizzie said with a shake of her head. “Carter the Farter.” 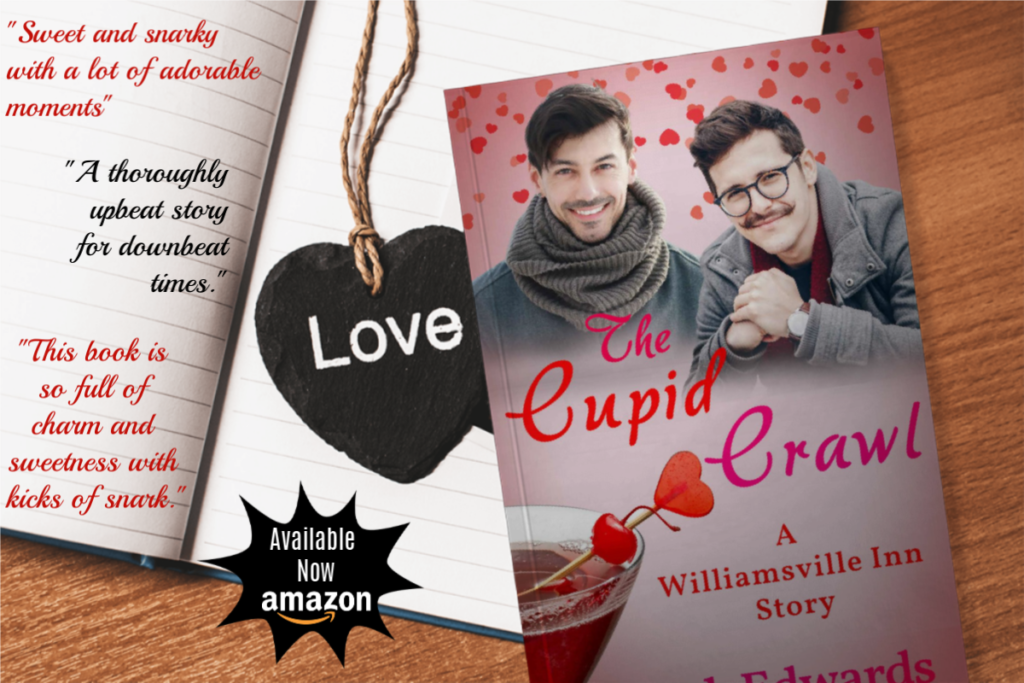 Hank Edwards (he/him) has been writing gay fiction for more than twenty years. He has published over thirty novels and dozens of short stories. His books fall into many sub-genres, including romance, rom-com, contemporary, paranormal, suspense, mystery, and wacky comedy. He has written a number of series such as the suspenseful Up to Trouble, funny and spooky paranormal out for you gay romance Critter Catchers, Old West historical horror of Venom Valley, the erotic and funny Fluffers, Inc. series, and the funny and thrilling Lacetown Murder Mysteries series co-written with Deanna Wadsworth. No matter what genre he writes, Hank likes to keep things sweet, steamy, and fun. He was born and still lives in a northwest suburb of the Motor City, Detroit, Michigan, where he shares a home with his partner of over 20 years and their two cats.