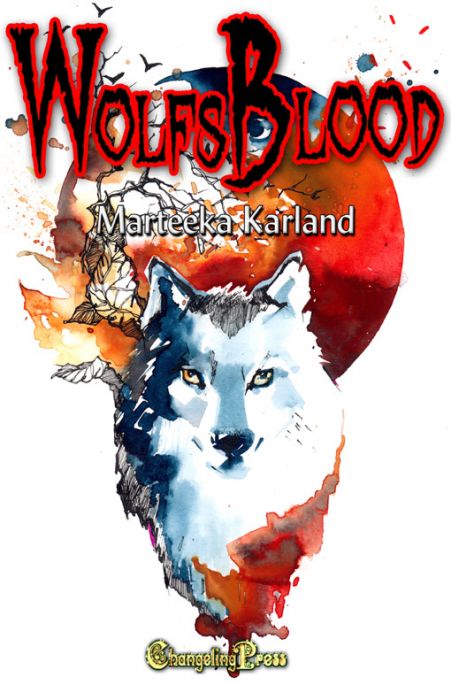 In Earth’s brutal future, humans are no longer at the top of food chain. Paranormals roam the frozen wastes, predators as protective as they are dangerous — especially when it comes to their chosen mates.

Snow Wolf: Xander needs no one, but the woman calls to the Vampire within, daring him to take her. Instinct wouldn’t allow him not to hunt her, especially with another male sniffing around what is his by right.

Fire Wolf: Logan knows the second he scents the little fire wolf she’s his mate. Convincing a Wolfsblood to mate with a Lionsblood, though, will be a tall order. Fortunately, he’s up to the task.

Shadow Wolf: Leiah has no clue what she’s in for when Shadow Wolf Rikker claims her and threatens to take her from the only family she’s ever known. Can two Shadow Wolves find a balance before Leiah’s pack is torn apart?

Possession: Harael. Relaren. Valael. They’re predators. Killers. So how is it the three biggest, baddest Vampsblood out there have been undone by a mere slip of a girl — a human at that? They never saw this one coming. No one — not human, not Vampsblood — is going to come between Josette and her mates.

Xander’s anger was as cold as the frozen rain stinging every bit of his exposed flesh. He watched his prey with fury. How dare she? The Snow Wolf embraced a male of her kind before slipping into the small opening in the rock beneath the natural overhang.

As soon as he’d realized this was where she lived, Xander had scouted out the caverns until he knew them like the back of his hand. He’d only seen the woman from a distance, but her obvious familiarity with the other man put Xander in a killing rage. The unnatural attraction he had for a woman he’d never even met didn’t bother him in the least. It was what it was. Xander intended to take the woman for his own before the night was upon them, and that was all that mattered.

Soundlessly, he followed the couple into the cave beyond the rock wall. Only the slight sound of their distant voices deeper underground drifted to him, but it was enough. Xander followed, waiting for the moment the male turned away from her. He would not kill the man. Yet. If he proved to be too much of a nuisance later, though, Xander would eliminate the threat.

Knowing the caverns in this area well, Xander recognized the direction his woman and her companion headed, and he veered off. The farther away from them he was, the less likely they’d know he followed. Crawling through smaller crevices, he made his way to the community buried deeply in this particular branch off the Mammoths. It was getting late, and Xander knew the woman would make her way to her residence soon. He intended to be there waiting on her. It was time he claimed what was his.

Never had a woman intrigued him like she did. The pull toward her was unbreakable, and Xander wasn’t a man who fought his inner cravings. Being half Lionsblood, he recognized the call of a mate. Being half Vampire, he knew he could choose to ignore it, but he didn’t really want to. He wanted to explore her before he dismissed her. If he had her a time — or fifty — he could think again. All he had to do was work her out of his system, and he could move on with his life. Xander wasn’t made to be tied to someone. He was more animal than man.

It took only a few minutes to reach her den and enter through a crevice in an out-of-the-way corner she’d covered with a heavy boulder, presumably to keep out the draft as well as unwanted guests. Xander’s strength, however, was enormous. Not only did he have the enhanced strength of the Lionsblood, but he was gifted with many abilities of the Vampire as well. More so than even his brother, Shiffley. Shiffley had always helped humans, even before he met the female he’d mated with. Now, he was positively smitten. Xander refused to be like that. He was a loner, pure and simple.

Once inside, he surveyed her room with a critical eye. There were several small feminine articles — pastel bed coverings, scented candles, a colorful vase, and a small bar of scented soap — but nothing masculine. Good. She didn’t share her living space with the man. That would have been unfortunate.

Situating himself in one of the darkened corners, Xander settled in to wait. Which he did. For over two hours. To say Xander was in a foul mood by the time the door to her den opened was a severe understatement. To put it mildly, he was seething. He waited until she was in the room and the door firmly shut behind her before making her aware of his presence.

“Where the hell have you been?” He growled, the question so full of menace Xander half expected her to run screaming from the room. Lesser men and women had in the past.

Not his woman. She merely looked around until she spotted him where he leaned against the wall.

Xander straightened then and stalked toward her. He didn’t move quickly, but took his time, approached her warily. No doubt she’d bolt at any second.

“I wondered when you’d finally get around to joining me.” Her tone was mild, not in the least distressed. If he hadn’t known better, he might have suspected she knew he’d been following her. “Have a seat. I’ll make us some tea.” She gestured toward the small couch, the only piece of furniture in the room other than her bed. Lighting a small lamp set in a natural alcove in the rock, she set about her task, not once looking back at him.

Of all the things Xander had expected, this wasn’t one of the options. The Snow Wolf acted as if this were an everyday occurrence to her. He wondered exactly how many men she’d entertained here.

Immediately, he tried to tamp down on the inquiry because it sent his temper spiraling out of control.

The Snow Wolf turned to him as if sensing his rage, her face serene. She might have been in the room with a close friend for all the fear she showed. She didn’t seem to consider herself in any danger at all. “Drink this.” She handed him a cup of dark, steaming liquid. “It will help ease your discomfort.”

On some level, Xander knew he should say something. He knew what he was feeling was so far out of the norm for him as to be on a completely different plane of existence.

Anger was nothing new to him. Everyone got angry. But the intense, rolling jealousy was something else altogether. He knew it, but seemed helpless to stop it. What the hell was happening to him?