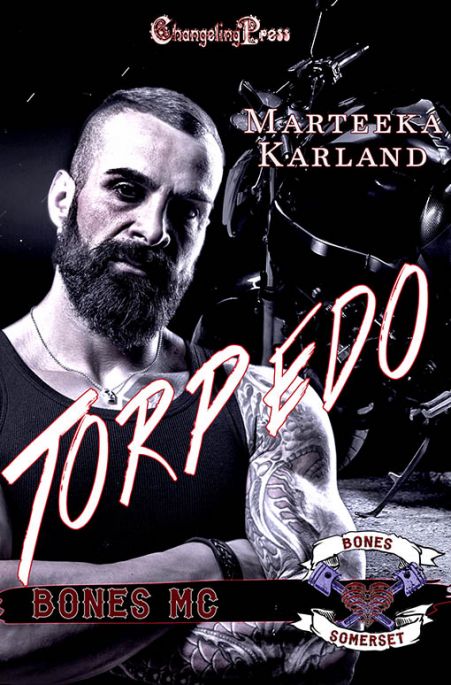 Ambrosia — When I went to the penthouse, I was expecting a playboy. I wasn’t even surprised when the playboy in question answered the door stark naked. The gun surprised me, but, hey. I just roll with it because it’s a job. Given my present circumstances, work is hard to come by. My crazy ex, Tyler, got put in prison, and his equally crazy father, Richmond, decided it was my fault. He’s managed to get me fired from every job and kicked out of every apartment I’ve landed since. What I need is a hero. Unfortunately, those are in short supply. Until I catch the attention of a crazy, naked man wielding a gun. Sensing a theme here?

Torpedo — After more than a month on the roof of the world, I’m ready for some sunshine. The last thing I need or expect is another woman vying for my attention. The cute little thing who has the job of being my personal butler while I’m on vacation changes all that. She’s professional and courteous, never coming on to me like most women do. Lord knows I gave her reason to, answering the door naked as the day I was born. She runs fast enough when I inform her I was in the middle of a self-pleasuring session, though. Can you see my smirk? Unfortunately, she doesn’t need a naked man in her life. She needs a hero. One to slay her demons. Fortunately for her, that man is me.

The sun beat down like an everlasting holy light. Torpedo basked in it. Scotch in hand, he sipped the amber liquid, savoring the burn. After a month in the cold of the Himalayas, he needed this respite. He was a big man, and spending so much time at high altitude hadn’t been easy. Most mountain climbers are slight and wiry. He was tall and heavily muscled. The guide his client had been with had smirked at him the way only an experienced mountaineer could smirk at an amateur who thought he could play with the big boys.

Well, it hadn’t been his Goddamned idea in the first fucking place. Little princess meant to show her daddy she could do whatever the fuck she wanted. Daddy had been determined to have someone baby sit her, given the recent threats to him. Torpedo couldn’t blame the man for wanting to protect his daughter, but, honestly, the she’d been a bitch about it. She’d done everything she could to make it hard on Torpedo, Shadow, and Vicious, choosing destinations that would be the hardest on the team of big paramilitary bikers.

Just thinking about the situation now made his hackles rise. Had Bones, or more correctly ExFil, been actually calling the shots like they should have been, they’d have never left the Goddamned country. Hell, they might not have left the fucking house. It had cost Shadow and Vicious a lovely case of pulmonary edema for which they were still being treated in the hospital. It had cost Daddy’s little princess a busted ass. And not in a good way either. That episode had been both repugnant and satisfying.

Had it been any other woman but the spoiled little rich girl, he’d have gladly given her more. The woman had clearly enjoyed her spanking, but she’d disqualified herself from being fucked by virtue of the fact she was a bitch. And her voice got on Torpedo’s ever-loving last nerve. She was a whiner. Even doing what she’d chosen to do, she whined the whole time. It was too cold. The sun was too powerful so high up on the mountain, and her fair complexion burned easily. Her feet hurt. The wind burned the delicate skin of her cheeks. No. Really. Where’s the bathroom? Blah, blah, blah.

When Shadow’d had to be carried down the mountain, Torpedo had turned her around and marched her right behind the caravan to the village where he’d called in a helicopter. He could have done it from the camp where they’d all gathered, but Shadow was too big for the type of chopper that could fly at the high altitude. Torpedo had thought it only fair that she’d have to walk down behind Shadow’s stretcher. She’d not only made his team miserable, but she’d damned near gotten two of them killed. He’d lectured her the entire way down the mountain. Even Shadow, the man with infinite patience, had given her a piece of his mind. When he could breathe well enough to talk, that is. Then Torpedo had continued over the internal headset while they were on the helicopter. When they’d gotten on a plane to go back to the States, he’d lectured her some more. Then all the way from the airport to Miami, where her father was waiting in the limo to take her home. She’d bolted from the plane in tears, and Torpedo flipped her off as she went.

Her daddy hadn’t been happy about the hand gesture, but he’d warned them she could be a handful. Apparently, no one had ever spoken to her harshly in her life. Well, as far as Torpedo was concerned, it had been past time. The really funny thing was she’d texted and called him in the days following his departure, trying to get him to go out with her. Or to simply get together to fuck. His response? “Not if your pussy was the last Goddamned pussy on the motherfucking earth.”

Now he sat by the pool, soaking up the gloriously warm sunshine, letting his body heal and looking forward to welcoming his brothers to the little vacation the girl’s daddy had funded for them. If all went well, Shadow and Vicious would join him in a few more days. Once they were out, the clock would start. They had a month vacation in the lap of luxury coming once all of them were out of the hospital. He got extra as a reward for not killing the man’s daughter.

He was currently relaxing in the Imperial Suite at the Breakers Palm Beach. He had access to all the resort had to offer at no cost, and he was utilizing every last fucking amenity. He’d been assured by Cain that the wealthy client was picking up the tab, so Torpedo could give a fuck how much money he spent. While sitting idle wasn’t his thing, there were many things he could do in the city to pass the time. Like hang out with Bones’ sister club. Salvation’s Bane in Palm Beach was filled with employees of ExFil the same as Bones. As far as Torpedo was concerned, they were all brothers and sisters. Vicious was a member of Salvation’s Bane, and Torpedo couldn’t have asked for a better man at his back.

Having been in the cold for so many days, Torpedo was thoroughly enjoying the sunshine. Naked. By the private pool on the balcony. Well. It had been a hot tub, but he’d cooled down the water and now it was a pool. Of sorts. Anyway, the point was he was warm and not bundled in layers of high-tech cold-weather gear on top of a fucking mountain where the air was too thin to breathe. Fucking paradise.

The chime that signaled someone was at the door made him want to throw a punch. He’d only been here a couple of hours. Neither Shadow nor Vicious were due for a few more days. Which meant someone he didn’t know or want in his private oasis was intruding. So help him, if it was that fucking woman, he was going to shoot her.

Gritting his teeth, he stomped to the door, not bothering to put on his shorts or wrap a towel around himself. Fuck ‘em. They didn’t wanna see his junk, they could damned well leave him the fuck alone. On the way to the door, he snagged his Sig Sauer.

“Who the fuck goes there?” He chambered a round and flung open the door, holding the gun at his side. His gaze met a pair of champagne colored eyes, belonging to the most extraordinary looking woman he’d ever seen in his life. She was dressed in a conservative pantsuit with sensible pump heels, her inky black hair in some kind of complicated twist away from her face. Her body was compact and small. Stood nearly a foot shorter than him. Even in the pantsuit, she had lush curves and a nipped in waist. Her makeup was understated, applied carefully to enhance her natural beauty, not to cover up flaws or give the illusion she was something she wasn’t. There should have been nothing sexy at all about her, but Torpedo thought she was easily the most alluring woman he’d ever imagined.

If his nakedness — or the gun — bothered her, she didn’t give any outward sign. Her gaze stayed firmly on his, her features serene and friendly. “Good afternoon, Mr. Ferguson. My name is Rose, and I’ll be your personal butler while you visit us. I trust your accommodations meet with your needs and approval?”