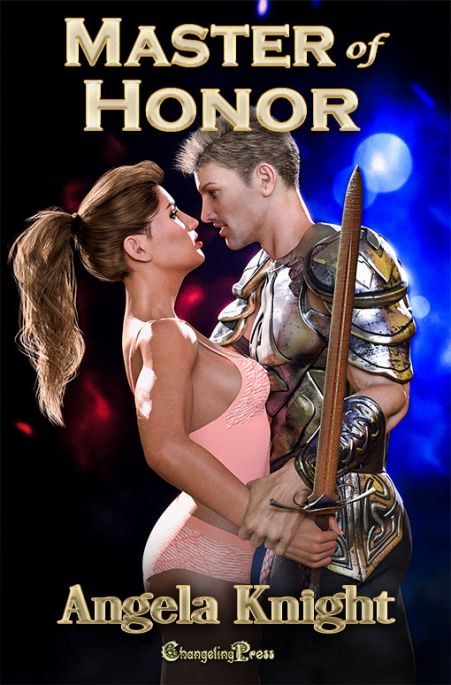 A month ago, Cheryl Parker thought she was an ordinary woman — a nurse, a mother, a woman whose lover had walked out. Now she’s gained incredible power thanks to an alien spirit who has made her immortal. She looks twenty again. And her ex is back.

It’s not unusual to discover an old lover kept secrets, but some are harder to believe than others. Ulf’s secret is that he’s an immortal vampire Knight of the Round Table. The good news is, he still loves Cheryl. The bad news is, he thinks the creature inhabiting her is a potential threat to humanity. The worst news is, there is a threat — and it could well kill them all.

Ulf wants nothing more than to be with Cheryl again. The problem is her magic resembles that of a dragon who tried to set a small town ablaze. And she knows more about the creature than she’s saying.

Even as passion rekindles between them, Cheryl and Ulf must overcome years of lies and mistrust. Otherwise they’re doomed — and so is everyone else. Because the creature stalking them is something worse than a dragon. Much, much worse.

Cheryl Parker stood at the foot of his hospital bed, watching the machines tracking his heartbeat, respiration, and blood oxygen. Eyelashes as thick and black as crow feathers stood out against his bloodless cheeks beneath the thick bandaging encircling his head. The tube of a ventilator distorted his mouth, the machine hissing as it breathed for him. She wondered whether his eyes were his mom’s soft brown or the blue-gray of his dad’s.

Jenny Sanders had said her son had played Hulk to his brother’s Iron Man all morning, running around the house, laughing and giggling. Until he’d raced out the front door into the yard, his brother hot on his heels…

Right into the path of his father’s practice tee shot. The golf ball slammed into Brandon’s temple in precisely the wrong spot, fracturing the thin bone and embedding fragments in his brain.

One frantic ambulance trip to Mecklenburg Memorial later, a neurosurgeon had removed a chunk of the boy’s skull to allow room for the swelling that would otherwise damage his brain. The doctor had tucked the square of bone beneath the skin of Brandon’s abdomen until it could be reattached once the danger was past. He’d cleaned out the skull fragments and closed, and the prayers had begun.

The ventricles of the child’s brain were filling with blood, a sign of encroaching brain death. More surgery was needed to repair the bleed, but it was too deep in the brain. Dr. Deepak Anand feared he couldn’t even get to the blood vessel without killing the child. Anand had spent all afternoon calling hospitals around the country, trying to find a neurosurgeon with the skill to risk operating. After one look at Brandon’s CT scans, they’d all turned him down.

The neurologist had scheduled a proof-of-life electroencephalogram for later tonight to see if Brandon was brain dead. If so, his parents would have to decide whether to take him off life support. Based on his declining vitals, nobody thought he had a prayer of passing the EEG.

She wasn’t a doctor, much less a neurosurgeon. Yes, she’d been a nurse for almost forty years, fifteen of them as a nursing supervisor. She’d treated thousands of sick and dying people, and she’d fought like hell for every one of them. Too often, there’d been nothing she could do. She’d been only human.

Cheryl wasn’t sure what she’d become last month, but “only human” no longer applied. Otherwise, she wouldn’t have to cast spells to make her twenties-looking face appear its true fifty-nine. Mirrors were still freaking her out. She’d glimpse herself and think, Who is that kid and what is she doing in my house?

So yeah, she had power. But this was brain damage that scared neurosurgeons who thought they were gods. Can I pull this off?

The answering silence in her head seemed to tick.

At last Gaia’s voice whispered through her mind like the sigh of leaves in a cold wind, inhuman and distant. If we do nothing, the Sight tells me his parents will be planning his funeral tomorrow.

Shit. She remembered the look on his father’s face. That stunned I’ve-killed-my-boy expression had made her worry Stephen Sanders would try to self-medicate with a bullet. Where would that leave his wife and eldest child?

Cheryl had never faced anything like this with her son Adam, but she could imagine how she’d feel. Paul would have been devastated…

Not Paul, she reminded herself. His name is Ulf. He lied about that like he lied about everything else. Despite the bitterness in that thought, there was longing in the next. Will he show up again tonight?

After twenty-eight years without a word, Ulf had dropped by half a dozen times in the last month. Probably making sure she hadn’t gone evil and started eating the neighbors.

Who the hell cares? she told herself impatiently. Healing this kid is what matters.

Besides, she’d violated her own code of magical ethics to create the opportunity. First she’d had to put a spell on Brandon’s parents to send them down to the cafeteria for dinner. Otherwise they wouldn’t have left for more than a few minutes. They’d be gone for the next hour. Then she’d compelled the medical staff to ignore anything odd going on in Brandon’s room. She’d laid a third spell on the equipment, making sure everything would maintain the same readings the machines were recording now. Otherwise, changes to Brandon’s heartbeat and respiration might raise questions later she wouldn’t want to answer.

Damn, she hated using her power to fuck with people’s heads. This was the same kind of shit witches had done to her. Guess I’ll just have to live with being a hypocrite. Gaia, can we pull this off in the time we have?