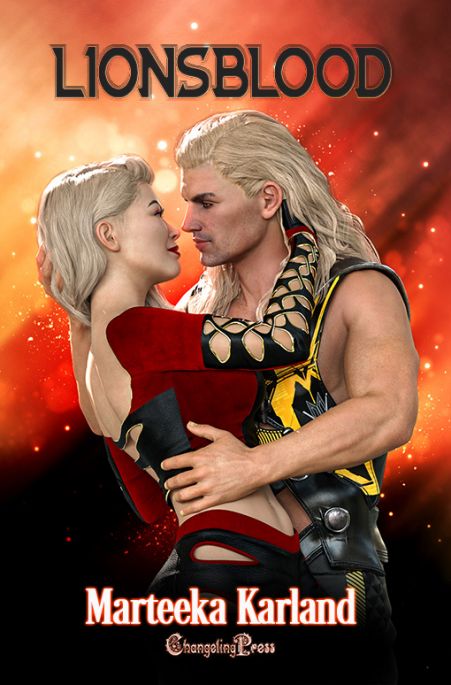 In Earth’s brutal, future frozen, humans are no longer at the top of food chain. Paranormals roam the frozen wastes, laying claim to whatever they can defend. Humans are tolerated by some, but not all of the new species.

The most vicious of the new races are the Lionsblood. No one dares defy a Lionsblood. These predators take what they want and never look back. These men are as protective as they are dangerous — especially when it comes to their chosen mates.

“What?” The familiar masculine growl of her long time friend Klark almost made Marie sob with relief when he answered on the third chime.

“Klark, I’m so sorry to call this late.” She had probably awakened him from his nightly hibernation. Most lionsblood were already deeply asleep by two hours past nightfall. It protected them from the bitter cold that blanketed the northern hemisphere of Earth at night. Not that the temperature was much better during the day. Given the fact that he’d answered at all, he probably hadn’t settled down yet for the night.

“Don’t worry about it. What’s wrong?” He knew her too well. Unless she missed her guess, Klark wouldn’t let her gloss anything over. He’d make her tell him everything before the night was out.

There was a long pause.

She took a deep breath. This was the hard part. “Shiffley’s Bar.”

Again, there was silence.

Marie blinked several times, the question catching her off guard. “Yes.” She didn’t dare tell him she’d made it into a necklace she never took off.

“Go to Shiff. Show him the stone. He’ll put you in a safe room. Do not leave that room.”

The link went dead, and Marie cringed. They’d been friends too long for her to hope he’d let this drop. He might not question her tonight, but there would be a grilling, and Klark never stopped until he had all the information he wanted. Not only that, but given Klark’s temper, things didn’t bode well for her tonight.

She did as he instructed and was shown to a tiny room. She sat down on the bed. The one window was laser-proof and tinted, but she could still see the perpetual drifts of snow that blanketed the landscape outside. Shiff, the vampire lionsblood hybrid, kept the room as a haven for humans caught out in the violent night. Not only were the preternaturals and immortals deadly to humans, but the night turned the Earth into a frozen wasteland in excess of 100 degrees below zero in the summer, and 150 below in the winter. The only things keeping humans alive were the underground farms and the few above ground “safe rooms” the hybrids built for their “pets.” This safe room was impenetrable, and impossible to leave unless Shiff allowed it.

When the heavy titanium door burst open, only to slam shut so hard her insides shook, naturally she nearly jumped out of her skin. What a time for him to choose to remind her of the strength of a lionsblood. In this world, the lionsblood were at the top of the food chain.

“Jesus Holy God!” She was at once relieved to see Klark standing there, but her relief was short lived. He looked livid.