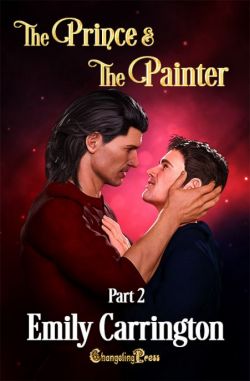 As the tension mounts, Aaron and Jason must face their demons. But those demons never counted on the love between them growing from a single flame to a raging inferno. Now, just maybe their demons will have trouble with them.

Publisher’s Note: The Prince and the Painter Parts 1 & 2 are the prequel to Painter’s Pride (Prince and Painter 1). For everyone who asked Jason and Aaron’s history, thank you.

Warning: The Prince and the Painter Parts 1 & 2 deal with issues of PTSD, M/M rape, hate crimes, stalking, kidnapping, and torture. Jason and Aaron’s stories may be triggers.

“If this is what a hangover’s like,” he muttered, grimacing at the taste in his mouth, “I’ll never get drunk again.”

Jason’s door opened and Griffin, wrapped in a towel and nothing else, trudged in. She looked much less glamorous first thing in the morning, but still managed to carry herself with a regal tilt to her head. “Morning,” she muttered as if finding Jason’s boyfriend in his bed was normal.

Halfway through his calculus class. Aaron sighed. “I guess I’ll go back to my dorm and change.”

“Probably for the best.” But Griffin was looking at Aaron, nailing him to the spot with her gaze.

“You’re a lost lamb. Jay loves lost lambs. But if you don’t bring anything to the table but heartache and horror, stay away from him.” Griffin turned her back on Aaron and dropped the towel as she reached for clothes already arranged on her bed. “He’s gentle and he’s loving, but that doesn’t give you permission to use his nature against him. Unless you have something to offer him, and I mean something good, leave him alone.” She sighed. “Aaron, that came out more harshly than I intended. It’s just… Jason’s nature is loving. I don’t want to see him hurt.”

Aaron stuffed his feet into his shoes. “I’m not asking anything of Jason.”

“No? What about asking him to listen to the confession you gave yesterday?”

“I told him the most horrible thing that’s happened to me.”