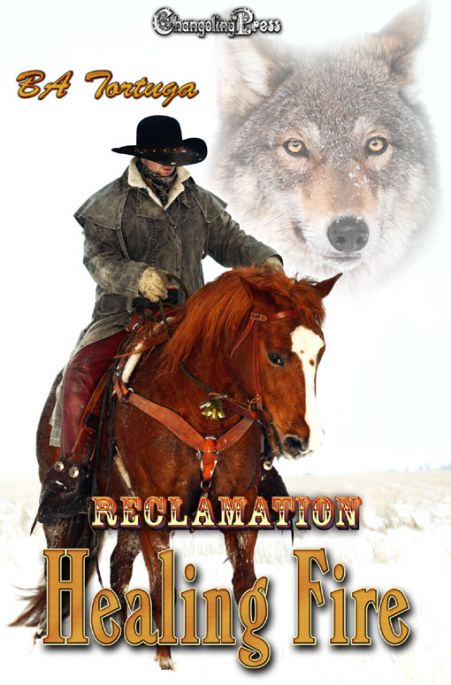 Lee is just the transporter for the broken werewolves his team rescues from the Brotherhood. His latest pick-up goes badly when one wolf bolts, and his van is shot at, making it tough for him to keep it together. He’s got sick and badly injured wolves to care for until someone else comes to get them, though, so he heads for his cabin in the woods, knowing he has to keep his charges safe.

Drew has been in captivity a long time, helping keep his friends alive by giving of his own healing energy. Lee is like a whole new world for him, because Lee’s life force bolsters his, and Drew knows he’s found the other half of his soul. Now he has to learn he can’t save everyone if he wants to stay with Lee. Can they find a way to do what they must and still love each other?

One of the wolves bolted at the first vehicle change, and he knew he should have gone after, but the other five had a rendezvous with one of Abby’s contacts, and he had to get them to the, well, not church on time.

That idea made him laugh out loud.

They were getting worse, and he was beginning to worry he wasn’t going to be saving many more.

The last one in the first truck was so skinny, so exhausted he was barely breathing. The run had taken it out of him. Lee lifted him, needing to get him moved. “Come on, buddy. We have to keep moving, okay?”

Something made him frown, a whiff of gunpowder on the air, and he tossed the wolf in the cab of the new truck, heading off and leaving the empty truck behind. It was registered to someone else, just a piece of shit to move bodies with.

This truck was his.

He knew it backward and forward, how fast it could go, how it could take a turn.

The wolf whined gently, and Lee nodded. “I know, buddy. I’ll come back and look for him once you guys are safe. He seemed strong. They’ll be chasing us, not him. I’m sorry.”

He floored it, heading up into the mountains, pushing it. He couldn’t go home, but he could go to the cabin. It was safe, secure, warm, and well supplied.

Defensible. “We’ll get you guys safe until the other team can come. I swear it.”

Poor babies. So skinny. So tired. This shit pissed him off. There was always someone out there willing to exploit, whether it was humans or animals or shifters like them. He hated it.

What he did wasn’t much, but it was something. He could get these guys somewhere safe, somewhere they could heal or die, whichever they needed to. At least they would be free. Usually the ones he picked up were men, but more and more often they were leading out wolves. He had no idea if this meant they were weaker, stronger, just different. It didn’t matter. They were free.

The wolf next to him wiggled over enough to put a dry nose against his hand, a soft, grunting sigh sounding. Yeah, he got it. This was exhausting. “Rest, man. I’ll have food for you when we stop.” Good food, not the kibble-like crap they’d been fed at the Brotherhood.

He thought he heard the heavy tail wag, and that made him smile. “Right. Sometimes that’s what you need. I have milk. I have hamburger. I have chicken. Good stuff. There’s even an elk roast in the freezer.”

A sharp whine sounded when he said elk. Yeah. That was the reddest, gamiest meat. It would have the most nutritional value.

“We’ll start with the milk and defrost the elk, then. You hold on, buddy, and I’ll help you.”

That tail thumped again, and he would swear the mangy coat looked better, fuller. Trick of the light, he was sure.

“The cabin is remote, but it’s warm and safe. We’ll hide out there for a while, let you guys heal.”

That nose was colder now when it brushed him, and those teeth grazed his wrist when he reached out to stroke the wolf’s ears. A thank you.

Panting, the wolf closed his eyes, then the breathing evened out, and Lee felt alone again. That was okay. He was used to it.

He kept looking over, though, because he needed to see that skinny chest rising and falling.

It was important to keep them all alive, but this guy really spoke to him. Something about the way the wolf responded told him the spirit was willing.

More from B.A. at Changeling Press …

Texan to the bone and an unrepentant Daddy’s Girl, BA Tortuga spends her days with her basset hounds and her beloved wife, texting her sisters, and eating Mexican food. When she’s not doing that, she’s writing. She spends her days off watching rodeo, knitting and surfing Pinterest in the name of research. BA’s personal saviors include her wife, Julia Talbot, her best friend, Sean Michael, and coffee. Lots of coffee. Really good coffee.

Having written everything from fist-fighting rednecks to hard-core cowboys to werewolves, BA does her damnedest to tell the stories of her heart, which was raised in Northeast Texas, but has heard the call of the high desert and lives in the Sandias. With books ranging from hard-hitting GLBT romance, to fiery manages, to the most traditional of love stories, BA refuses to be pigeon-holed by anyone but the voices in her head.