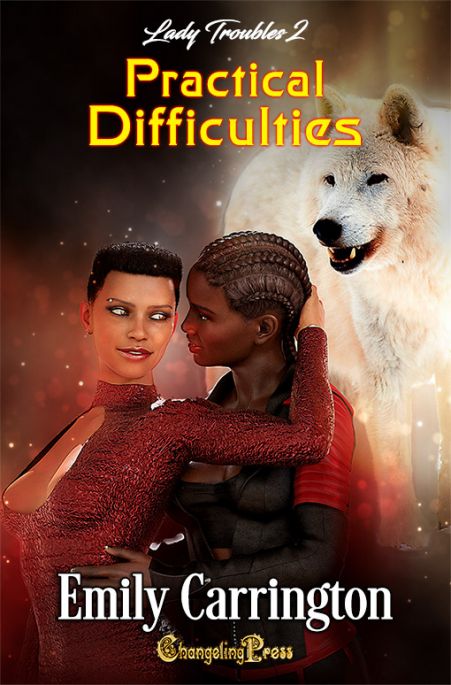 Maxine, a trans male-to-female werewolf, is struggling to get beyond her grief over the losses she suffered in her past. Now her mate, Sonya, is pregnant. When Maxine’s ghosts rise to break the new lovers apart, they have more help than they need from her pack.

Sonya’s starting to wonder whether Maxine’s loyalties lie with the wolf pack she’s been with for decades, or with her new mate. It’s beginning to look like sabotage from all quarters. How can a new couple stay together, especially with pups on the way?

or Pre-Order for October 18th at retailers

Sonya Johnson stared at her clean pad, scowling at its whiteness against the cocoa dark of her thigh and the pale mauve of her panties. Her period should have started four days ago. Granted, she’d stopped taking her birth control after she’d forgotten to take it for three days back in late September. But was it too much to ask that her slip wouldn’t bring on pregnancy? She was a damned doctoral student and working a full-time job.

“Please, God,” she whispered. “Let it just be late. I do not have time for this right now.”

She shivered as a blast of air conditioning rushed across the back of her neck. Maybe it was time to grow her hair out and screw the cuteness of her current kinky-haired bob.

I’m a medical technician. I know enough about the human body to get this message: either stress is delaying my menstrual cycle, or I’m pregnant.

She cursed her mate before she could stop herself.

Sonya sighed, flushed the toilet, and pulled up her panties and shorts. It wasn’t Maxine’s fault, even if she was a trans werewolf and still had a dick. They’d both thought Sonya’s pill would take care of things. They’d briefly discussed using condoms too, but Sonya privately thought at the time that that was overkill. Maxine liked teasing herself with a condom now and then, but as a form of birth control, they were weren’t all that reliable.

She made an exasperated noise, very quietly.

The only thing that is Maxine’s fault, partially at least, is how infrequently I see her.

Sonya walked into the bedroom she and her mate shared and went to her side of the wall-length closet. She took off the striped shirt she’d been wearing and put on a sweater with a cowl neck. It was a soft orange that complemented her medium brown skin tone and had the added bonus of clinging to her curves in all the right places.

Too bad Maxine isn’t here to appreciate it. She sighed noisily and then covered her mouth and glanced around, almost expecting half a dozen werewolves to pop out of the woodwork and ask her what was wrong. She kept her SearchLight-won shields in place most of the time, and her lips shut almost as much, but she still felt as if the whole darn pack could read her like a book.

Those shields were something she’d picked up at the academy in DC, learning them from the parapsychology teacher. She didn’t use them much at work, at least not when she was relaxed and in her own domain — the medtech department. But with all the psychic powers boasted by the members of her new eros pack, she felt on edge if her mind wasn’t guarded.

Shaking her head, grimacing as she thought of how paranoid she’d gotten over the past two weeks, Sonya headed into the living room to sit at the desk Maxine had bought her as a mating ceremony present back in late September. It was now the first week of October and she did not need to be worrying about pregnancy when her first dissertation defense was happening in less than seven days and she hadn’t seen her mate for more than a few minutes at a time since they consummated their relationship.

And while that was the worst of it, not being with her mate, her third problem was almost as pressing: three of the werewolves in her new pack were openly hostile toward her. Oh, not where Maxine, who outranked all of them, could see, but whenever they caught Sonya alone…

Oh, stop thinking about it all in such negative terms. They’re just pests. And as for Maxine, she sleeps here every night she’s in town, doesn’t she? You’ve made love four times so far. That’s good for two weeks’ worth of living together, isn’t it?

Well, actually, no. Sonya had gotten the impression from listening to her friend, Luke, talk about his early relationship with his husband that sex every day wasn’t uncommon. In fact, the only time her genie and dragon friends hadn’t managed sex at least three or four times a week was when Mark, the dragon half of the pairing, was in crisis.

Was Maxine in crisis?