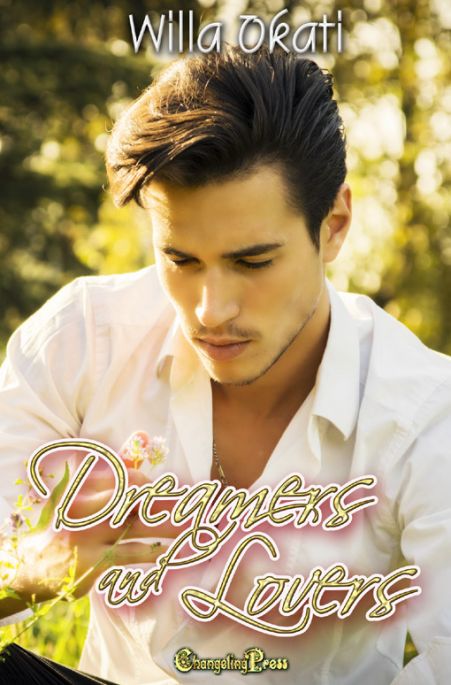 What if saying goodbye to all you ever thought you were sure of is only the first part of hello?

Lovers, Dreamers, and Me: Tolliver’s buried his life in taking care of his sister and the bookstore his grandmother left him. That doesn’t leave much time for romance. Sarah, his sister, decides to do a little matchmaking. Only her choice is another man, and Tolliver’s not gay! Noble’s not, either, but he is deeply attracted to Tolliver, and he’s not above using his psychic gifts to draw them together. The road to discovery has more twists and turns — and toys — than even he ever dreamed.

The First Hello: Shawn Tillerman thinks he’s losing his mind. Wary and damaged after a hard life filled with broken promises, he’s been having flashes of lives he didn’t live. He hasn’t told anyone what’s happening to him — he’s too busy keeping his twin sister away from Oxy. If he can sell the house he’s inherited, he can turn their lives around. Or not. Because Raleigh, the compelling stranger who wants their house, swears Shawn’s reliving memories. That he’s the man from Shawn’s dreams. Shawn doesn’t believe Raleigh — but he’s beginning to wish he could.

All rights reserved.
Copyright ©2019 Willa Okati
Excerpt from Lovers, Dreamers and Me

It wasn’t love at first sight.

Sarah, Tolliver’s kid sister, saw him first. Perched on the Old Curiosity checkout counter doing her homework, she swung her heels and nudged Tolliver with the toe of her sneaker. “Incoming customer.”

Tolliver reluctantly turned away from the page of the old book he’d been halfway through, its faded type and strange serifs tempting him back in. “I got it. Keep working.” He closed the book and lifted his chin in the customer’s direction, his eyes still on the book’s worn leather cover. “Can I help you?”

“Hope so,” the man said, his voice a deep, melodious tenor that shaded toward baritone. “I was told you might have some hard to find tarot decks in stock. There’s one, a local artist — Judy Schuyler. She did an abstract Impressionism set. Do you have that deck?”

“We might have sold hers,” Tolliver said, not really paying attention to the guy and registering no more than a vague impression of height, tousled brown hair, and bare arms. He kept one eye on the flyleaf of the 1891 edition of Great Expectations, pencil poised to sketch his reseller’s price. Amazing. He almost wanted to keep this one for himself.

“Can you check?” The customer was persistent, and patiently unruffled. “Maybe for Sharice Donough, too? She’s not local, but she did a mountain music inspired. There’s a stringed instrument on the front –”

“Right. It was a mandolin, I think?” He’d caught Tolliver’s attention at last. Tolliver reached for an inventory log, still kept on paper for the most part — he was a traditionalist — and started flipping through pages. “I’d swear I remember getting one of those last year. Wait. Do you mean the Wisconsin Sharice or the Montauk Falls Donough?”

Tolliver’s fingers slipped on the light-lead pencil he held and sent it clattering to the floor. “Sorry, let me get that.”

“No problem,” the customer answered, his stance relaxed. “I’m not in a rush.”

Tolliver crouched, scanning the flotsam and jetsam he kept stashed under the old four legged breakfront he used as a checkout counter. “Did you check in the glass cases on the back wall?” he called. “Ha. There you are.” The pencil had come to a stop halfway in, halfway out of the desk’s boundaries.

“Hang on, I think I see it.” The tip of a sneaker, encasing a foot of amazing length, prodded the pencil. “Is this what you’re looking for?”

Tolliver had reached for the pencil at the same time. Together, they sent it skittering across the shop floor.

“I’ve got it,” the customer said, rich amusement lacing his tone. He crouched. “Do you always work this hard for this little?”

“I pay attention to detail,” Tolliver replied, slightly annoyed. He caught a glimpse of long, tapered fingers with solid knuckles snaffling the pencil.

He stood, brushing the layer of dust he’d acquired down there off the knees of his khakis and reached, still not looking, for the pencil. “Thanks.”

“Don’t mention it.” The customer tipped his head to one side and studied Tolliver. Tolliver noticed, sort of, the lionlike amber of his eyes and the generous width of a smile over white teeth. “The Schuyler?”

“Back wall, glass case,” Tolliver said, already drawn back to the Dickens. He ran his fingers reverently over the binding. Ruined from years of handling, but a piece of history all the same. “What you see is what we’ve got. If it’s not there, sorry, you’re out of luck.”

The customer laughed, low and rolling.

Tolliver frowned up at him over the book. “What?”

“It’s nothing.” The customer swung around, loose limbed and graceful, and tossed a casual wave at him.

“No, what?” Tolliver held his pencil point down on the counter. “Share the joke.”

The customer shrugged and half turned, the leonine cast to his features shadowed. “I’d heard the owner of Old Curiosity was cranky, but it was still worth shopping here. You never know what you’re going to find.” His grin was still bright. “Back wall?”

“Back wall,” Tolliver confirmed, frowning. He kept an eye on the customer as the man ambled away, long feet, lengthy stretch of legs, and arms held loosely comfortable at his sides, thumbs tucked into his belt loops.

So, no. Not love at first sight.

Intrigue, though. That was part of it.

More from Willa at Changeling Press …