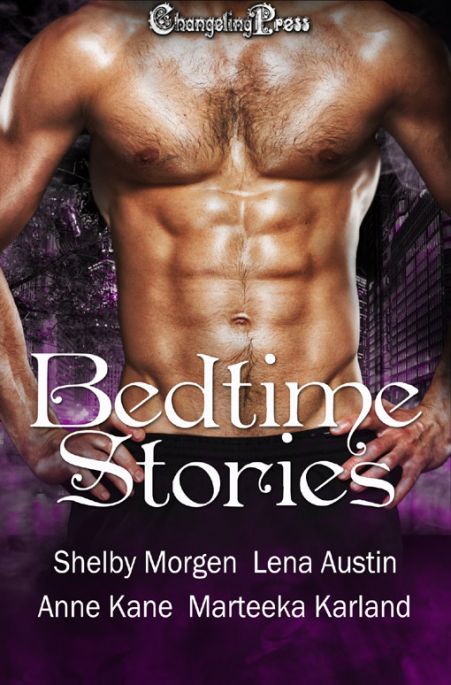 This story’s about how Sam saved Troll’s Blog by coming up with one of the coolest ideas ever. Bedtime Stories Publishing…

Shelby Morgen — Troll’s Blog: Perfect skin, dusted a light powder blue. Bright burgundy Mohawk. 6’4”. Dark blue uniform. Big shiny gun. Yeah. I’m the Troll under the bridge. But if you’re reading my blog, you know that. That’s why I call it Troll’s Blog. Duh. But I digress. This story isn’t about me. Not exactly. It’s about my blog. And Sam. And another one of Sam’s great ideas. You’re gonna love it. Really.

Lena Austin — Ugly Duckling: Jean-Paul, incubus editor for Bedtime Stories Press has been assigned a new author. Dominick may be a fantastic author, but when he gets aroused, the situation gets ugly. Literally. Jean-Paul is sure he can handle Dom. Maybe…

Anne Kane — Pixie’s Playmates: “While the story had an engaging quality, I feel that the flavor of the sex was too vanilla for Bedtime Stories Press.” When Bedtime Stories Press review coordinator Pixie calls the reviewer into the office she finds out “B.J. Smith” is really two very drool-worthy males who want to demonstrate their toys. What’s a pixie to do?

Marteeka Karland — Shut Up! As official kitty of the Bar and Grille for the Bedtime Stories readers and authors, Callie has the last say in everything she does and with everyone in her vicinity. Then Troll makes a proclamation that could very well get someone killed. Anyone who can get the last word in on Callie gets to have his way with her in bed. It’s a proposition Eli can’t refuse. Callie’s about to get all the loving from Eli she can stand. If she can just shut up.

Note: Bedtime Stories in no way represents any actual publishing company. Any resemblance to the staff and authors of Changeling Press is purely coincidental.

That’s our story and we’re sticking to it.

I was so wrapped up watching the ’50s vintage Harley coming toward me I didn’t even notice he wasn’t registering on my screen. As in 1950s. Well over a hundred years old, and still on the road. That machine was really flying. Well, no. Not really flying. That’s an old euphemism for moving. Speeding.

God knows what he’d put in the tank. Probably running on moonshine. Nothing legal’d have it cranking like that. The sound of that motor purring down the road toward me had my blood heating up. I closed my eyes for a moment, ready to breathe in the scent of ancient exhaust.

Then it hit me. Sigh. No. Not literally hit me. My brain engaged — enough to see the century-old motorcycle was not registering on my vid panel. Nothing. Flying completely under the radar. And he wasn’t slowing down. In fact, the closer he got, the farther he laid himself out along that tank. Rider and cycle shot past me in one long black blur that had my mouth watering — and my hand on my gun. He might be sexy as hell, all black leather stretched out long and lean over that tank, but nobody — and I mean nobody — runs the gate on my watch.

Alarms and sirens went off, and lights flashed down the next mile of bi-way, warning the felon that he’d best slow down and pull over before the Toll Collector caught up with him.

Not that he slowed in the least. In fact, I’d have bet a month’s salary he gunned it about then.

Fine. If that’s the way he wanted to play it, the chase was on.

Damn, but that view looked even better from behind.

I shook my head as I jumped into my patrol pod, a three-wheeled Flitter that was airborne at a safe hover of a half-meter or so by the time I got my Mohawk crammed into the cockpit and the door slammed shut. What the fuck was he thinking, trying to outrun a Toll Collector?

The bridge itself is a long, straight shot of highway with equally long approaches, spanning just under two kilometers of unquiet waters. This isn’t just any bridge they’ve entrusted to me. No. It’s the Golden Gate, linking Old San Francisco to Marin Co., California. One of the longest bridges in the world. One of the few still in constant operation. Sure, a lot of people use Flitters these days, rather than ground vehicles, but Flitters aren’t exactly safe hovering over rough water, and the bay’s never calm. So unless you’ve got a full pilot’s license, and something jet propelled, if you’re going south, you’ve got to pass over my bridge.

And pay my toll. Which this asshole had elected not to do.

I’m not exactly an inexperienced pilot. I know my bridge like she was my baby. She’s 2.7 kilometers, from abutment to abutment, laid out straight and true as an arrow shot from a master’s bow. We crossed her in just under one minute, and if I hadn’t been so pissed off, I’d have been scared shitless.

Yeah, even a Troll can experience fear. Doesn’t happen often, I’ll admit, but chasing that leather-clad backside across that bridge through sheering winds high above some of the roughest, coldest water this side of hell at 200 KPH is more of a thrill than even a Troll is used to.

I could tell, too, from the way he hugged that tank, that he was really getting off on the chase. Every time the wind hit him he’d roll his shoulders, leaning back into it like he was riding a lover. He glanced back at me once, facemask lifted enough for me to see him grin. I’d bet my pension he had a boner the size of his ego. When I caught this idiot of a Human he was going to get a piece of a little more than my mind. I might even resort to police brutality — before I friggin’ killed him.

No Human scares a Troll and gets away with it.