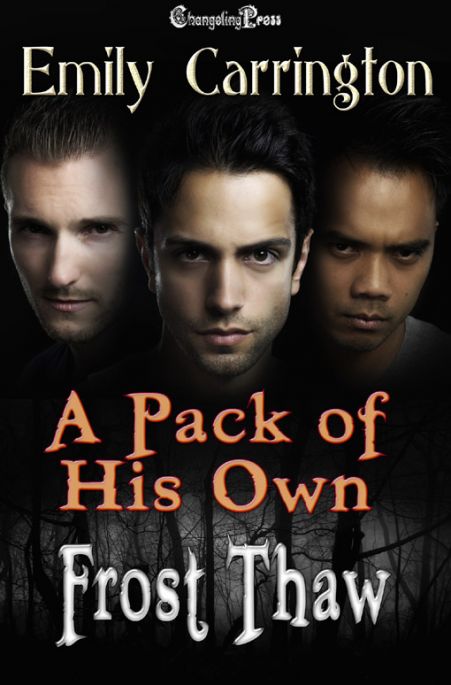 Frost Thaw. For werewolves, it’s the most sexually charged night of the year.

Charlie and Luis: Frost Thaw is pack alpha Charlie’s favorite holiday, but this year the ceremonies include incorporating the former Rowan Pack into the Tilthos. Pomp and circumstance. And responsibility — especially for Charlie, pack alpha. Which makes sneaking away just before the festivities begin to find Luis, his mate, all that much sweeter.

Ethan and Jeremy: Ethan’s greeting Jeremy’s ex-lover for the first time. Jeremy knows there’s only one way to convince Ethan he’s the only man Jeremy will ever love…

Charlie’s favorite holiday, werewolf-created or human made, was Frost Thaw. But this year’s iteration would be different. Tonight, he would be adding to his pack. The ceremony would be all about incorporating the former Rowan Pack into his pack, the Tilthos pack. Pomp and circumstance. And although there would be time for song and dance throughout the evening, there would be little chance for Charlie to do more than observe. As alpha of the newly increased Tilthos pack, it would be his responsibility to see to it that all the wolves behaved themselves.

So, knowing he wouldn’t be able to truly enjoy himself this evening, he went in search of his mate, Luis, at around one in the afternoon. Technically, both of them should have been at work. But Charlie had called off for “wolf business” and Luis had taken one of his infrequent vacation days for the same. Even though he was a psychic vampire, he was Charlie’s mate. That meant he could claim pack business.

“Reading my mind?” Charlie asked as he shut the door and locked it.

Luis turned on the stereo and turned it up so the few others in the house wouldn’t hear. “Maybe.” Luis unzipped his fly.

Charlie loved the sound of a zipper. He grinned and went down on his knees before his mate. “I’ve missed tasting you.” And he took almost all of Luis’s thick cock into his mouth.

Luis swayed and moaned, tangling his fingers in Charlie’s short, kinky black hair. “Mm.” He bucked his hips, though gently. “Claim me. Make me yours.”

Charlie smiled as he sat back on his heels. He gave Luis’s glans one last lick, savoring the taste of pre-cum even as the air filled with heady scent made of equal parts chocolate, dark, rich coffee, and Luis’s own scent. The first two aromas were part and parcel of all male psychic vampires, but the third was indescribable bliss.

“Are you just going to stare at me all day?”

“Not staring,” Charlie murmured. “Inhaling.” He grinned when Luis uttered an embarrassed-sounding laugh.

“I’ve never really thought of myself as smelling good. No matter how many times you tell me.”

Charlie stood. “Well, get used to it. You smell like my own private moon garden.” This was a werewolf saying, like “My own corner of heaven.” Charlie had slowly been introducing his mate to all the werewolf sayings. And he shared in Luis’s culture too. He spoke Spanish, specifically Puerto Rican Spanish, but there was so much more than language to share.

Charlie took Luis’s face between his hands and kissed his lover deeply and thoroughly, until they were both breathless and their cocks, Luis’s uncovered and Charlie’s still trapped, seemed to strain toward each other.

Then Charlie stepped back and smiled wolfishly. Hungrily. “Bend over.”

Get more from Emily at Changeling Press…