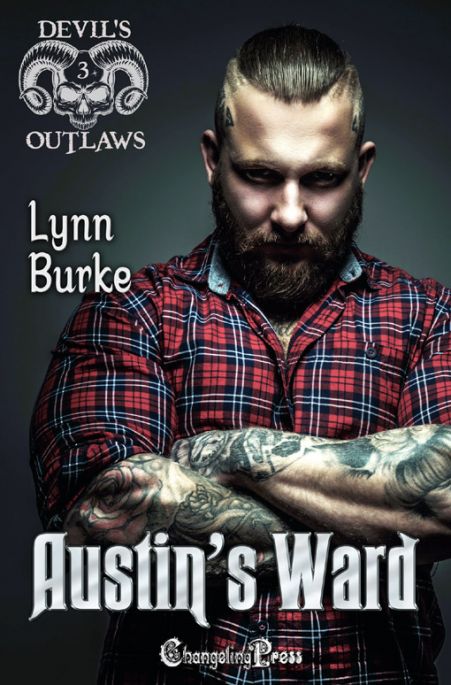 As the Devil’s Outlaws Sergeant at Arms, Austin Butterbaugh has no intention of getting involved. A self-proclaimed bachelor for life, he’s endured a broken heart and refuses to suffer the same again. But the second Cadence Fraser crosses his path, with her long blonde hair and curves, she owns him.

Sleeping with a senator didn’t offer Cadence the ticket to a better life she’d hoped for. Instead, she’s on the run for her life, straight into a badass biker’s arms — as his ward, under the Outlaw’s protection. Although fire flares to life between them, and Austin satisfies her in ways she’d never known, fear has Cadence’s sights set on something more.

With the senator hell-bent on eliminating every trace of his indiscretions, bodies will fall in Austin’s determination to protect Cadence. Failure won’t be tolerated, even if saving her could mean losing her forever. Her happiness is all that matters, but can Cadence fight past her fears to see a future with Austin before it’s too late?

I imagined the woman haunting my dreams danced on the stage to my right as music thumped in my ears and the scents of sex and booze filled my nose. Just another night at Devil’s Strip Club, guarding the door to the back office and girls’ rooms, but my mind refused to focus on my duties as head of security — and the Outlaw’s Sergeant at Arms.

I’d only ever seen Angel’s roommate once. Plump ass, tiny waist, big tits — and gorgeous blue eyes that didn’t even seem to take notice me as I’d followed Angel into their apartment after Angel and I had been attacked in the alley. Cadence Fraser had fucking ruined me for life.

Not that I ever held hope of finding an old lady of my own. I kept my goddamn heart under lock and key since the last person to own it ended up six feet under. Loving anyone outside of my Outlaws brothers was off-limits. Wasn’t in the goddamn cards for my future.

A ruckus at the front door drew my focus, and my dick jerked to attention as the blonde I wanted beneath me, tied to my bed, screaming my name, pushed past Brewer. He caught my gaze, and I nodded, letting our entrance guard know to let her in.

Cadence hurried into the club, but pulled up short, her gaze flitting around from bar to stage to me.

I groaned as her blue-eyed gaze landed on me, causing my dick to jerk inside my leathers. Fucking zipper pressed into my swollen length, but I didn’t shift or drop a hand to ease the discomfort.

She started toward me, but I kept my arms crossed, my face a mask while sliding my gaze down over her body. She hid her lush curves behind a dark coat, one she clutched to her middle, her knuckles white around the straps of an oversized purse. Tight-ass jeans clung to her thighs and calves, and pink heels the same color of her purse encased her feet.

All woman. Fucking hot as hell sashaying toward me like she owned the goddamn room and knew she drew attention left and right.

I glanced upward as she drew closer. Her pulse thrummed in her neck. Black-smudged tear tracks lined her cheeks, the rest of her mascara smeared beneath her wide eyes I hadn’t noticed when she’d first appeared across the lounge.

The fuck? I scowled, but otherwise held unmoving as she stepped right into my personal space.

“Where’s Angel?” she half-shouted to be heard over the thumping bass.

I tipped my head toward the door behind me.

“I need to see her.” Wetness welled in her eyes, turning them crystalline in the dimmed recess light overhead.

Cadence angled to step around me, but I shifted left. “No one’s allowed out back.”
Tears spilled over, and she stepped toward my right, but I moved with her, blocking her way.

“You fucking oaf!” She swung her purse, but I tightened my abs and let the leather bounce off me. “Let me past! I have to talk to her!”

As the protector of the Outlaws’ dancers, I wouldn’t be swayed into shirking my duties — by anyone, no matter how hot or frantic they appeared. Lips pressed tight, I stood like a mountain, uncaring of whatever she wished to dish out.

She shrieked and pummeled against me, her fists almost amusing, but my lips didn’t so much as twitch.

The pulsing music of the latest dancer faded, and Cadence’s curses drew attention.

She swung toward me again, and I closed my hand around her forearm. “Enough.”

Her lower lip trembled and tears dripped from her chin. “Please.”

Her whisper fucking ruined me — a pleading I’d imagined on her lips while jerking off every goddamn night since first seeing her.

“Fuck.” So much for no admittance. Scowling, I yanked open the door behind me and dragged her into the dim hallway beyond.

Gunner, our president, and his old lady, Shelby, moved toward us from the dressing room, Angel and Bowie on their heels, both couples hanging on one another with that lovey-dovey touching that twisted my stomach.

“Cadence?” Angel pushed around Gunner, and Cadence let out a sob as I let go of her arm and her roommate grabbed her in a hug.

“Someone found out,” Cadence sobbed. “Fucking hell, I’m done for!”

“Shit.” Angel glanced over her shoulder at Bowie, whose scowl mirrored my own.
He spewed a curse as though knowing exactly what Cadence had meant. The harshness of his tone, the glint in his eyes, raised the hairs on my neck.

“What the fuck is going on?” Gunner asked as I stepped back, hands fisted, my focus on the back of Cadence’s head as she cried against Angel’s shoulder.

“Cadence and Senator MacGillroy have been fucking for two months,” Bowie answered for both the girls.

Cadence jerked back from Angel’s arms, her shoulders wilting. “You told him?”

Angel shrugged although her brow furrowed. “No biggie.”

“No biggie?” Cadence jerked from Angel’s hold, stumbling backward into me.

I grasped her upper arms to keep her from falling over. “I told you not to tell anyone!” she half-sobbed, her body trembling. “He’ll kill me if word gets out!”

“No one will lay a goddamn hand on you.” Bowie spoke truth. Cadence didn’t belong to an Outlaw, but I wasn’t about to let anyone touch her. Threaten her. A rumble sounded in my chest at the feeling I hadn’t had for years, and Cadence tilted her head back and to the side, capturing my gaze.

“Do what you have to do,” Gunner said a moment later, stepping past us, his hand wrapped around Shelby’s. “Oh, and Austin?”

My ears perked up to listen to whatever my president had to say behind me, but I couldn’t tear my gaze off Cadence’s wide eyes as she blinked up at me.

“Cadence is your responsibility.”

or Pre-Order for May 24th at Online Retailers

Find more Lynn Burke titles at Changeling Press…
Lynn Burke is a full time mother, voracious gardener, and scribbler of hot romance stories. A country bumpkin turned Bay Stater, she enjoys her chowdah and Dunkin Donuts when not trying to escape the reality of city life.