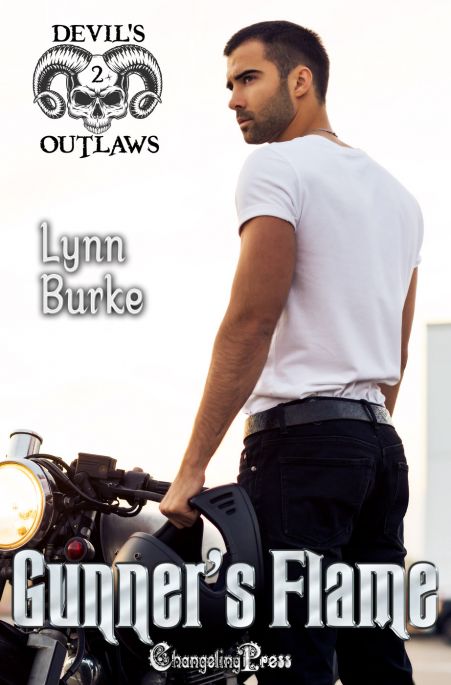 Will Gunner choose his loyal Outlaw brothers or will he
choose the path that crosses them — for her?…

Mitch “Gunner” Flannigan rules the Devil’s Outlaws with a firm hand, one trained by his stint in the SEALs and tempered by empathy for other vets. When a curvy redhead in Army fatigues snags his attention — and puts him in the line of fire — he’s torn between wanting to bury himself between her lush thighs and helping to ease her return to American soil.

The recent death of Shelby’s mother and her cousin’s terrorizing only adds to the PTSD hindering her return to civilian life. Flames ignite when she’s thrown into Gunner’s arms, where she also finds safety with someone who understands her struggles.

Attempts on Gunner’s life threaten their future, but so do the secrets Shelby withholds from him. When those secrets come to light Gunner will have a decision to make. Will he choose to stand with his loyal Outlaw brothers or will he choose the path that crosses them — and leads him right into her arms?

The coppery scent of blood filled my nose while sweat coated my skin from the desert sun beating down overhead. Screams echoed in my ears. My heart thudded so damn hard in my chest I swore an elephant sat on me, closing off my throat. Silent tears squeezed from between my clenched eyelids as I clutched at the shirt bunched in my hands and fought to keep the nightmares from taking over my head like they had since that day my platoon had been ambushed.

A waft of subtle, musky cologne trickled through the blood-scented air, and I burrowed my face into a hard, warm chest, seeking out quietness of mind, needing him to erase the memories of war I’d barely gotten a taste of before realizing I hadn’t been cut from the same cloth as my father.

“You’re okay,” the man’s raspy voice murmured over and over again, the sensation of rocking eventually pulling me back to D.C., my ears filtering the truth of my situation to my scattered brain.

I focused on breathing, desperate to keep from losing my shit like I’d been doing on a daily basis since returning home to find my fiancé moved out and on with his life. Having my mother lying in a hospital bed with terminal cancer had been my ticket out of the Army, but besides death, it was the shittiest way to get discharged.

She’d passed three days earlier, leaving me alone to deal with grief I’d yet to allow myself. Leaving me floundering in life, having lost all sense of belonging.

I only had one family member left — my older cousin who was supposed to have met me there at the memorial, and while I’d been on time I hadn’t seen him while chatting with the man holding me.

Voices buzzed in my ears, but I kept my eyes shut against the police, EMTs, and whoever else scurried around us to see to the wounded.

Eventually, the man — Gunner — pulled back and tilted my head. I forced my eyes open, blinking in the bright sunshine. He said something about cops wanting to talk to us, but I didn’t budge from the comfort of his lap, the feel of his strong arms offering shelter I hadn’t experienced since before the death of my father when I’d been a gangly, young teenager.

Gunner felt like… home. Something I’d felt had been ripped away from me while overseas. Returning to American soil hadn’t brought that comfort. Sleeping in my childhood bed hadn’t given me the same rest I’d hoped for.

I closed my eyes again, rested my cheek on his chest, the steady thump of his heart giving me something to focus on. My fingers once more found purchase in his shirt, and I clung to him like a lifeline to sanity that kept my throat-tightening panic at bay.

Eventually, the cops got around to us, a million questions I couldn’t focus enough to answer — even after I checked my messages to find my cousin had texted me a few minutes after the shooting saying he couldn’t make it.

At least he was safe.

Still shaking with the need to pass out, I declined going to the hospital when someone suggested I go. The thought of beeps and the sickening scent of bleach and death had my stomach heaving, making me feel even worse.

“I’m fine,” I insisted for at least the tenth time, folded in on myself, arms clenched tight around my middle while fighting off visions of Mom wasting away on her hospital bed.
Outlines of three bodies stood out in stark white chalk on the ground a little ways away, dark stains of blood still not completely dried or washed away. I tore my stare off the horrid sight, seeking out comfort.

Gunner and his two friends stood with another cop a few feet away, but his dark-eyed gaze stayed on me.

I heaved a sigh, settling my nerves the slightest bit at the understanding in his eyes, the connection I felt tugging us toward one another. I’d never felt need for someone as I did for Gunner, as though my body knew it would find solace and peace in close proximity to him.

The cops had my name and number, knew where I lived, and had jotted down what story I could offer. I was free to leave, but I hesitated, still dazed and uncertain of where I should go, what I should do.

Although I hated crowds, my cousin had insisted I go to the peaceful Veteran’s March for Peace, so I’d decided to take the train south into the city, but stay on the outskirts until our agreed upon time to meet.

The silent beauty of the walking crowd had soothed me in ways I’d never again expected to feel and almost gave me the sense of comradery I’d felt for a short time while overseas. Hundreds of people, quite a few in old uniforms from all branches of the military, had made their way through the streets of D.C. to silently protest the ongoing war, the ongoing loss of innocent lives even if recruits signed up knowing the possible cost.

Gunner and his two friends were of a rougher crowd, by looks, anyway. All three wore leathers and vests declaring them members of the Devil’s Outlaws, a biker gang aptly named from the northern suburbs, but I’d never been one to judge a person by their clothing choice — especially since Gunner had seemed hell-bent on helping me transition back to civilian life.

Also by looks, he was one of the hottest men I’d ever seen. Dark hair, dark eyes, dark tanned face, neck, and tattooed arms. He squinted in the sun while staring at me, lines crinkling the corners of his eyes as though he smiled on the inside…

More from Lynn at Changeling Press…