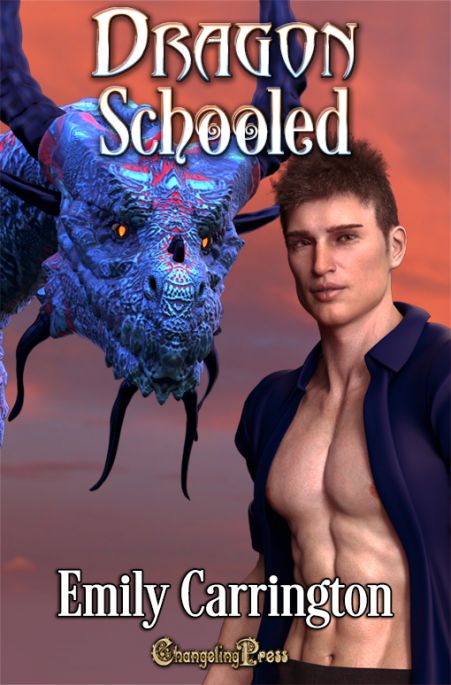 Russian Blau: Ice dragon Blau Lepa seeks nothing more or less than to be a professor at SearchLight Academy. He’s wanted to teach his whole life, and considers it a sacred calling. When he meets Professor Rob Boyle, he’s instantly attracted, but they’re both convinced that teachers and students shouldn’t have sex, not to mention that Blau’s afraid to bond with a human who will pass away so quickly. Eventually Rob gives in to his attraction and finds being dominated by Blau fills him with soaring desires and heals his wounded heart. But is that enough to make him decide to throw away his humanity and accept magical powers so that he can spend all eternity with his lover?

American Telepath: James is a water dragon who fell in love with a human. Rather than expose that human to a dangerous magical world, James abandons Henry. When they meet again it’s like they were never separated. Except Henry refuses — beyond the occasional bang — to have anything to do with James. Together they struggle to overcome the past.

Chinese Morning: Travis longs to remain in the magical world which has given him so much pleasure. The only problem: he’s terrible at his job, and without his job he cannot stay. To distract himself, he seeks out the challenge of sexually dominating a dragon. As Chen falls for Travis’s mouth and hands and mind, he is forced to accept the truth: submission is where he’s meant to be. Will their attraction be enough to rescue them?

Damn you, Charlie. Half werewolf, my ass. Rob felt his cheeks grow hot and tried not to glare at the door. Somehow he’d always known Charlie was something more than human. How else to explain his blocks-wide telepathy or his ability to hear many things he shouldn’t? How else could he have the ability to get around so smoothly without being able to see more than an inch in front of his nose?

Perhaps that last was unfair, but Rob wasn’t in the mood to be charitable. Charlie had interfered, all but throwing Blau and Rob at each other. How could he do such a thing? Granted, Blau was attractive. Blau was more; he was hot and cheeky, able to explain that the attraction wasn’t one-sided with only the lightest blush.

But that wasn’t the point!

Blau stammered, “I don’t — I don’t know chess.” He shifted some papers Rob just noticed, shuffling them a little and drawing them closer to his chest. “I can’t play anything but checkers and Go.”

One of the world’s most difficult games. Still, it wasn’t chess, and Rob was hard-pressed to keep the disappointment off his face.

Blau stammered again, “I-I’m sorry, but I have to grade these papers. I’ll uh, uh, see you later? And I won’t close my eyes in your class anymore.”

Rob turned to watch him. He might have called the man back, except Charlie could hear everything going on outside the door to his classroom. Rob didn’t want him knowing any more than was strictly necessary about the couple he’d tried to set up.

So, unable to raise his voice, Rob simply watched Blau’s tight, jeans-clad ass until it was out of sight.

September in Washington, DC, was a miserable time to be hard, Blau reflected as he struggled toward his dorm room. Not that it would be much cooler there, but at least he could scratch anything and everything he wanted to.

But as he entered the courtyard before his dormitory, he saw the fountain splashing merrily in the insane sunshine. Blau started toward it, only noticing the KEEP OUT signs when he was a few feet from the glorious spray. Letting out a growl of frustration, he stopped short with his hands balled into fists. What sort of taunt was this? Water just meters away and no one allowed even near it?

Frustrated and itching worse than before, Blau decided to give up being human for a few minutes. In spite of the academy’s rules, he doubted anyone would object to a dragon taking his true form for only a little while. After all, there were hundreds of different creatures on this campus. Surely all of them didn’t keep their human guises all the time.

He took a few steps away from the fountain and changed into his eight-foot-tall, pale blue, scaly form. Hence the name Blau, which was the thought he had almost every time he changed.

As tall as the fountain now, he stretched his wings. Just this small amount of free movement felt so good. Blau arched his neck and groaned as his skin settled more comfortably around him, accommodating itself to his frame. He would have been tempted to blow fire for the sheer joy of it, but he didn’t dare violate SearchLight Academy’s rules more than he was already. Fire was a threat to most creatures.

“What are you doing?” demanded a voice below him.

Blau looked down, expecting a teacher or even campus security. Instead he saw James staring up at him with his hands on his hips and his head thrown back to take in Blau’s whole aspect.

“Just stretching and trying to cool off,” Blau answered, his voice issuing from his throat in a resonant boom. “What are you doing?”

“Watching you.” James laughed. And changed, assuming his own eight feet of height. Blue like Blau, he was much darker, an ocean blue that held a little gray in its depths. Then he walked to the fountain, set a single foot in the wide basin at the bottom, and kicked water at Blau.

Who loved it. Basking in the cool liquid’s magic touch, Blau said, “More.”

James kicked more water at him. And more.

“What are you doing?” This time the question was delivered in a shout.

Blau looked to the other side of the fountain and saw Professor Boyle — Rob, Charlie had called him — standing with three other teachers. All four looked livid.

James got out of the fountain. “Just cooling off, sir,” he said, his voice also booming and yet seeming smaller than Blau’s.

“Regain your human forms immediately.” That was Rob. He’d folded his arms across his chest and was glaring up at them, completely unafraid.

Blau liked him for that.

James returned to his human guise. He was naked.

Of course he is, Blau thought, and I’ll be too.

He took two-legged form beside James and tried to look unabashed as he met Rob’s gaze. Was it his imagination or did he see hunger in the depths of the man’s chocolate eyes?