Can love eternal exist for those who are dead but not gone?
It takes a brave zombie to find out. 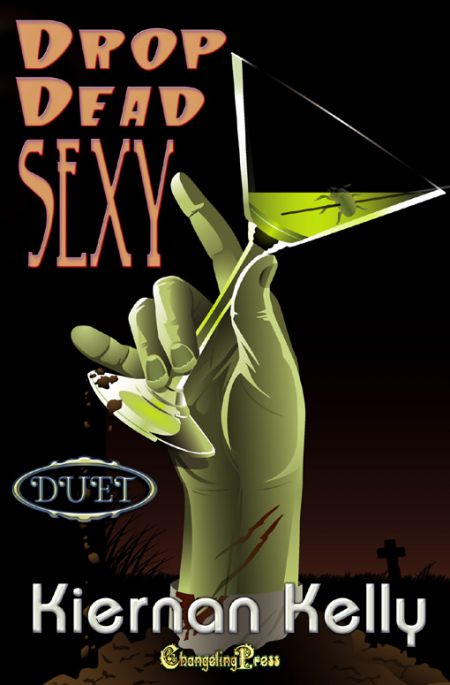 The dead have arisen, and all they want is their old lives back. Can love eternal exist for those who are dead but not gone? It takes a brave zombie to find out.

As Serious as the Grave: Tyler was only dead for a couple of hours before he reanimated, and he’s still handsome and drop dead sexy. What makes his unnatural life worth living? Daniel, a big hunk who just might be the special person Tyler’s spent his life looking for. Will his chance for a lifetime of love with Daniel be taken away before they even get started?

Lights, Camera, Zombies! Jericho’s never been one to shy away from the facts of life… and death… and re-life. Not everyone gets the memo that Zombies are humans with rights, however. When his life is threatened on the set of a new movie, Jericho and his lover, Dex, must decide which is more important, their Zombie pride or their lives.

All rights reserved.
Copyright ©2019 Kiernan Kelly
Excerpt from As Serious as the Grave

“Payday,” a voice called. The wall of Tyler’s cubicle shuddered as the mailroom clerk, a skinny intern with bad skin and a prominent Adam’s apple, banged his fist against it.

Tyler accepted his paycheck, noticing that the kid’s hand was shaking. No matter how long it had been since the undead had rejoined the ranks of the living, some folks were still gun shy about having to interact with them. “Thanks, Steven,” he said, smiling.

Steven nodded curtly, quickly backing out of the office. Tyler watched the mail cart zip by the door to his cubicle, and shook his head. The kid had worked for the company for nearly six months, but Tyler still scared the shit of out him. If Tyler frightened him, he wondered how Steven dealt with someone like Will Fenton, who looked like a Rob Zombie wet dream.

Turning his attention back to the computer monitor that glowed on his desk, Tyler typed in a string of numbers in rapid succession, and hit “print.” The printer whirred and began spitting out the pages of the report.

Looking up, Tyler saw Daniel Norris’ bright blue, bespectacled eyes blinking at him from over the edge of the cubicle wall. A lock of his curling, thick black hair fell over his forehead, giving him a distinctly Clark Kent-ish look.

“Be ready in a minute. Need to get the VanHilton report to Barry before I can leave. He’s been yammering for it all afternoon.”

“The meeting with the VanHilton people isn’t until the end of next week! Barry’s just busting your balls, Tyler. Quitting time is five o’clock, and the fucking jack-off knows it. I swear, the man’s asshole must weep with envy over the amount of shit that comes out of his mouth.”

Tyler laughed, nodding his head. “I know it. But it’s printing now. I’ll be ready in a minute.”

“Well, hurry up. There’s a pitcher of Bud with our names on it waiting for us down at The Pit.”

“We don’t have to go to The Pit again, Daniel.”

“We always go to The Pit. It’s traditional on Friday nights.”

“In case you’ve forgotten, The Pit is a gay bar, Danny, and you’re straight, remember? Why do you want to hang out there? We could go to the Ale House instead,” Tyler offered.

“Because you need to get laid. Just hurry up, will you? It gets crowded in there on Friday nights. I want to get there before we end up standing in a corner holding up the walls. I’ll meet you in the garage.” Daniel’s head disappeared behind the cubicle wall, and Tyler shook his head, watching Daniel’s shadow ghost behind the opaque glass as he walked away.

Scooping up the pages of the report, Tyler stapled them together neatly. Powering down his computer, he quickly cleaned off his desk. Slipping on his leather jacket, he left his cubicle, depositing the report in Barry’s inbox on his way out of the office.

Barry, Tyler noticed, had already left for the night. Guess the world wasn’t going to end if he didn’t have the report in his fat sausage fingers before five after all, Tyler thought wryly. Not that Tyler had ever believed otherwise. Daniel was right — Barry was an asshole.

“Night, Will,” Tyler called as he passed cubicle 17. A line of cardboard evergreen air fresheners had been strung across the cubicle wall, poor defense against the odor that clung to it in a nearly visible cloud. Will was a sweet guy, but none too fresh.

Will’s answer was his normal sludgy, wet grunt. Poor guy – it was hard to be articulate when you didn’t have lips and your larynx resembled Swiss cheese.

Making his way out to the parking garage, Tyler felt a pang of loss as he passed between the rows of shiny sedans and SUV’s. His own less-than-gently-used Chevy had finally died for good less than a month ago, and unlike its owner, there was no hope of resurrection for it. He hadn’t yet found a suitable replacement that was decent and still within his means. Since its untimely death at just over 225,000 miles, he’d been carpooling with Daniel.

Not for the first time since his reawakening, Tyler thanked whatever Powers watched over fools and dead men for Daniel Norris. He’d been Tyler’s best friend for years before Tyler had died, and had blithely continued their relationship afterward, as if there hadn’t been twelve hours in between when Tyler had been stiffer than a monk’s erection.

A slightly tinny horn sounded, hurrying Tyler to Daniel’s dark blue Honda. He tossed his briefcase into the trunk before folding his six-foot frame into the passenger side bucket seat. No sooner had he clicked in his seatbelt than Daniel had the car in motion, heading toward The Pit.

Kiernan’s stories of gay romance envelop diverse themes ranging from paranormal to fantasy, and science fiction to contemporary romance. She has fifteen novels currently in print and ebook, and over eighty shorter works available in both mediums. Contrary to popular opinion, she is not a zombie. Yet.