You’ll want a visit from these Ghosts of Christmas Yummy… 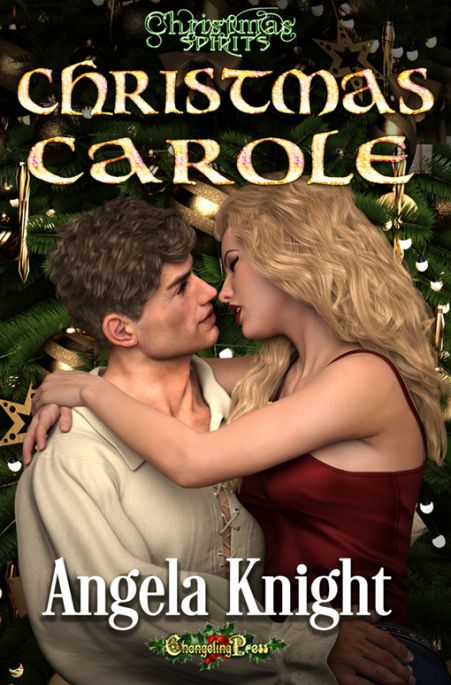 Carole Elzer is no Scrooge — she loves Christmas. But when she’s visited by the ghost of her best friend and business partner, Marley, Carole learns she must make amends for something she hasn’t done — otherwise, Marley warns, she’ll spend the rest of her life in anguish and guilt.

She’s guided on her voyage into Christmas Past, Present and Yet to Come by three sexy spirits, all of whom look just like her partner, Bob Crockett. Bob is still grieving for the wife he loved and lost years ago, but Carole nurses a guilty love for him.

As Carole explores her past, present and future with her handsome spirits, she realizes just how high the stakes are. Bob’s young son Tim’s life hangs in the balance. If she doesn’t learn how to save the child, none of them will ever again know a merry Christmas — and she and Bob will have no future together.

The rambling old Victorian house looked like it had fallen off a Christmas card as it sprawled under the full moon, all white wooden siding, mansard roof, and lacy gingerbread trim. A gorgeous tree stood in an upstairs window, decorated in antique toys and draped in flashing twinkle lights.

“Bah fucking humbug,” I muttered, my breath steaming in the cold as I trudged up the steps, wanting nothing more than my bed. I’d been at work since seven in the morning. It was almost midnight now.

To make matters worse, we’d been shooting a wedding video. Weddings require you to capture every moment, from decorating the church all the way to the last drunken guest stumbling home from the reception. Which makes for a looong day that seems even longer when it’s Christmas Eve.

And did I mention it was a wedding? No other event we shoot calls up old anger, pain, and grief like the joyous union of two people in holy matrimony. Not just for me, either. There’d been ghosts in Bob Crockett’s eyes all day. Which just goes to show, even the best marriages will eventually kick you in the teeth.

My partner deserved better. His wife, Marley, sure as hell had.

My keys jingled merrily as I unlocked the door. As I started to turn the knob, I glanced up at the goofy plastic lion doorknocker Marley had put up at Halloween two years ago. I’d left it up, even changed the LED batteries a couple of times. Looking at it always made me remember her, and smile. Or blink back tears.

It had never made all the blood drain from my face — until now.

Marley glared at me from the spot the lion’s head should be, her eyes blazing red, her brows lowered, teeth bared. Her lips shaped the word, “Idiot.”

“Christ!” I leaped backward, heart in my throat. And stared. The knocker was just a goofy plastic lion again, red LED eyes glaring.

Huh. I really was tired if I’d mistaken the beast’s mane for Marley’s long curls, its snarl for hers. Not that Marley had been the type to snarl without a damned good reason. She’d been more the rainbows and unicorns type, endlessly creative and funny.

Maybe the slice of wedding cake I’d eaten had been laced with cannabis edibles. Which was illegal as hell in South Carolina, but we were talking about the kind of people who held weddings on Christmas Eve. Being the richest fish in the very small pond of Carson, SC, the Grahams didn’t think rules applied to them.

Being Candice Elzer’s daughter, I knew a lot of people like that.

My heartbeat began to slow as I reached for the key I’d left hanging in the lock, twisted it, and pushed inside. I hurried to the foyer alarm system keypad to disarm it. My hand shook as I punched in the code, and I curled my lip in irritation. “Get a grip, Carole.”

Pissed at myself, I stomped over to pull my keys out of the lock and close the door.
My textile-magnate great-great grandfather had built the house a hundred and thirty years ago, and it had been in the Elzer family ever since. It still retained a certain dark Victorian grandeur, between its antique furniture, carved oak wainscoting, and odd little nooks and crannies created by asymmetric architecture.

Which could have been creepy as hell, if I hadn’t decorated the crap out of the house for Christmas. Holly, fresh pine boughs, and mistletoe were everywhere, along with Victorian Santas, angels, and antique toys. I’d put up two different live trees, one in my bedroom, and a twelve-footer brushing the parlor’s intricately carved ceiling details. The whole place smelled like a pine forest.

Unfortunately, my Christmas spirit had died of an advanced case of Graham Wedding around noon. My shoulders ached as I started up the stairs that were ridiculously wide, even by Victorian standards.

Somewhere in the house, wooden flooring creaked, sounding exactly like a footstep. The house had a habit of groaning and creaking to itself like an elderly lady bitching, but something about that particular sound made the hair rise on the back of my neck. I peered over the banister, listening, one hand dipping into my purse to fish for my cell phone.

Nothing. No other sound. Don’t be ridiculous, I told myself. The security system was still armed. Nobody broke in.

I turned to continue up the stairs — and gasped.

Parked on the stairs ahead of me — stairs that had been empty a heartbeat before — a hearse stood, its back hatch swung wide to reveal the coffin inside.

Lurching backward with a yelp, I barely saved myself from falling with a frantic grab for the banister. I spun and raced back down the steps so fast, it was a miracle I didn’t break my neck. At the bottom, I wheeled to peer back the way I’d come.

The stairs were empty.

Dumbass, what did you expect? No way in hell could a set of hundred-and-forty-year-old steps support a couple tons of hearse.

It hadn’t been cannabis that cake had been laced with. It had been LSD.

Bob. I needed to call Bob. Six-foot-four with a broad, muscular build, Bob Crockett could handle anything. One call and he’d be here in ten minutes. Back in his hard news days, Bob had covered everything from shotgun murders to high-speed chases, and nothing shook his cool. Not even his business partner’s overactive imagination.

But it was Christmas Eve, and we’d spent all day working that wedding because the bride’s family had written us a check with a lot of zeros. I wasn’t about to drag him out of bed now. For one thing, he shouldn’t leave his twelve-year-old son home alone just to calm me down.

Tim had gone along on today’s shoot, just as he’d been doing from the age of five. He’d always been a laughing, bright-eyed boy, but his mother’s death had left him pale and quiet. He’d seemed particularly withdrawn today.

Damned if I was going to bother them because visions of serial killers danced in my head. Instead I stood at the foot of the stairs, concentrating on getting my racing heartbeat under control.

I kept a Lady Smith .38 in my upstairs closet. Bob had bought it for me one Christmas, then dragged me to the range to practice until he was sure I could hit what I aimed at.

“I’ve covered too many fucking murders,” he’d told me. “If you’re going to live alone, you’re damned well going to be able to defend yourself.”

Now I took back every time I’d teased him about his paranoia.

Pulling my cell out of my pocket, I started up the stairs almost as fast as I’d come down them. If I heard so much as a floorboard creak, I was calling 911.

And tell them what? demanded the voice of common sense. That your doorknocker turned into your dead partner’s face and you saw a hearse parked on the stairs? The cops’ll search the house for drugs.

Damn it. No cops.

I hurried up the steps and down the hallway to the master bedroom, flipping on lights as I went. Pausing, I gave the room a once-over. The brass bed was neatly made under a beautiful heirloom quilt I’d inherited, like the house, from my grandmother. An antique cherry armoire and bureau stood along opposite walls. Next to the bow window, the Christmas tree was draped in twinkle lights, swags of gold tinsel, and wooden replicas of Victorian toys.

I closed the door behind me and hurried to the antique cherry armoire, where the Lady Smith resided in a top shelf gun safe. Fingers flying, I punched in the code and pulled out the matte black automatic.

Feeling a lot more secure — and a bit stupid at my freak-out — I put the gun down on the cherry nightstand and started undressing. We always dressed up for weddings, but shooting video requires stringing cable on your hands and knees. Not the kind of thing you do in a dress and hose. Today I’d worn a black wool pantsuit and an ice-blue silk blouse. For a moment, I distracted myself with the memory of Bob in a suit. The jacket had needed no padding to call attention to his broad shoulders, narrow waist, and long legs. Not to mention that perfectly muscled ass…

Cut it out, Carole. No lusting after Marley’s husband.

Still, I loved the intent look he got in those gray eyes whenever he was setting up a shot. There was something sensual in the way his powerful hands gripped one of our commercial-grade video cameras, balancing it effortlessly on one strong shoulder…