Can a human find forever with a spirit? At Christmas? 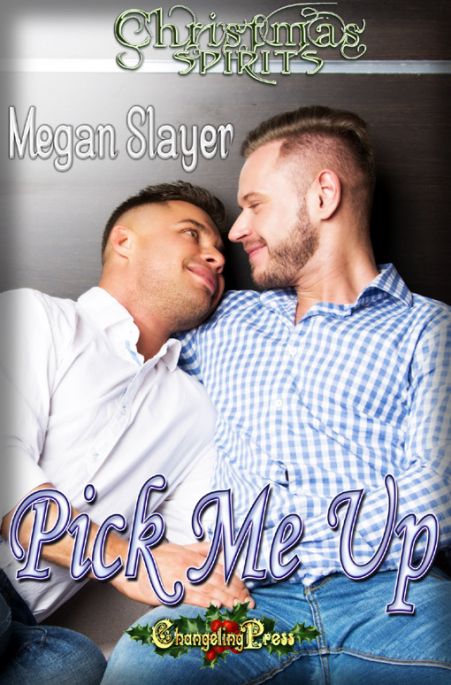 Nic Kristol wants one thing for Christmas — a second chance. Being dead makes second chances hard, but the moment he sees Jon, he’s determined to meet the handsome man.

Jon Ruhle thought he’d given up on romance, but along came Nic. He’s drawn to the mysterious man and would love to spend the holidays together. There’s just one problem — Nic’s a spirit. Will he and Nic find their forever together or apart?

“I’m going to try something new,” Jon said. “Remember me telling you about that bistro, Kim’s Place? That’s the new bar I went to a few times with Brett.”

Willie Gus said nothing — not that Jon expected him to reply. He plopped onto his side and licked his back leg.

Jon marveled at the cat’s dexterity. He swore if he could bend like that, he’d never leave the house. Why have a boyfriend if you could lick your own balls?

He sighed. Why was he telling the cat about his plans for the evening? Because Willie Gus was the only one who listened. Jon had once thought he could see spirits. Hadn’t he spoken to the ghost of his grandmother? Brett swore he was crazy. Maybe so. Jon still believed he’d talked to his MeMaw.

“Anyway, I’m going to see if I can catch the eye of the server, Nic. He’s adorable.” No, adorable didn’t begin to describe Nic. The guy had muscles everywhere, a toned tush, a great sense of style — despite the bland server garb — personality in spades, and those eyes. Jon could get lost in Nic’s deep brown eyes. He focused on the cat. “I love how easygoing Nic can be.” He frowned. “Do you think he’s doing it to get a bigger tip? Or because he’s really interested?” Was he wrong to want to pay for the positive attention? Maybe.

His phone rang. The cat growled, then darted from the counter. Jon swiped to check the listing on the screen. The library. What in the hell were they calling him for? He wasn’t on the schedule for that evening and besides, the library closed in half an hour.

He answered, despite his better judgment to leave well enough alone. “Hello?”

“You sound like I’m being mean,” Brett said. “I wanted to see what you’re doing.”

“I’m out.” He refused to give his ex any details.

“Would you be able to swing by the library and cover for me tonight? I’ve got somewhere I need to be,” Brett said. “I could use your help. You’re always good for a favor.”

“Not tonight.” He kept his voice level, despite wanting to scream. “You’re trying to get out early to meet a guy, and you want me to close so I’ll see you with this guy. It’s your standard operating procedure.”

“It’s seven-thirty and the library closes at eight,” Jon said. “You can cool your heels for thirty minutes. You can handle closing, and I don’t want to leave my date in order to help you. I’m not the boss.”

The poutiness in Brett’s voice grated on Jon’s nerves. “No.”

“You were more fun when we were together,” Brett said. “You weren’t so angry.”

“Maybe it’s because I didn’t know back then that you were cheating on me,” Jon snapped. “Now I know the truth.”

“I never cheated,” Brett said. “Come to the library and keep me company. It’s cold and snowy. Plus, we can heal old wounds.”

He could stand only so much lying, and Brett had gone over his limit. “I’m out.” He checked his look in the mirror alongside the table. The bistro closed at nine — he wasn’t sure why — but he wanted to try to get a drink with the hottie server. If he was going to go through with his plan, then he needed to get moving.

“Sorry. You have your job, and you’re scheduled tonight. I’m not. I have places to go after I leave this club.” The excuse didn’t sound great, but who cared?

“Nic.” Christ. He wasn’t with the guy, but Nic’s name rolled right off his tongue.

“Maybe.” Jon had seen Nic four times when they’d gone to the bistro, but Brett had paid no attention. Brett had been focused on the other men at the establishment. But that was Brett — he hated to pay Jon much mind.

“Have I dated him?” Brett asked.

“I don’t know, but I doubt it.” Jon stood and finger-combed his hair with his free hand. He wanted to look his best for Nic.

“Let me meet you. I want to check this guy out,” Brett said. “You know, make sure he’s on the level.”

“I’m good.” Jon appraised his reflection in the mirror. He needed all the confidence he could get, but damn, he was cute. Not handsome or drop-dead gorgeous, but cute. “I need to go. Nic’s ready and the bar is boring.”

He disconnected the call. “Oops.” Once he grabbed his coat and scarf, he stepped into his leather boots. He tucked his phone into his coat pocket, then snagged his keys and wallet from the table. He turned to Willie Gus. “Wish me luck.”

The cat sneezed, then left the kitchen again. So much for the feline’s vote of approval.

“I’m out. Hopefully, it’s a good night.” Jon left the apartment and locked up.

He headed downstairs and the spring returned to his step. Giddiness filled his mind. He was about to ask someone out for the first time in months. Holy shit. Could he do this?

He stepped into the bitter December air and gasped. He tugged his collar and scarf tighter around his throat. Christmas carols played on the loudspeakers along the street. Twinkle lights shimmered from the light poles, illuminating his path. Tinsel Christmas trees rustled on the trash bins, and a dusting of snow added a festive feel to his four-block journey.

Jon loved living in the center of Danielsville. He could walk to the stores, restaurants and even the theater. The library was only five blocks away. The police presence in town ensured anyone downtown would be safe. Why move away from such a wonderful situation?

He ducked into the bistro to find it mostly empty. He’d expected a large crowd, it being a Friday night and not long before Christmas. Where were the throngs of shoppers needing to wet their whistle after strolling downtown? He looked for Nic. Was his favorite server there?

“Freezing.” Jon swept his gaze over Nic. The burgundy long-sleeve shirt clung to his frame and showcased the strength in his upper body. The long apron covered his lower half. Pity. He loved looking at Nic’s body. He swallowed the whimper in his throat. He’d been cold until now, but the chill evaporated. Heat enveloped him and not because of the fireplace or his coat. “Which section is yours?” he managed. “I want to be in your section.”

“Over here.” Nic grinned. He seemed to shimmer from the inside. Was he wearing glitter? Nic paused and touched Jon’s biceps. “Are you sure you want my section?”

“Of course.” He wished he could lean into Nic. He loved the heat radiating from him. “Lead the way.”

“I’m off once I close out your tab.” Nic gestured to a booth. “But I’m thrilled you came here for me. I’m getting the feeling you like me.”

“I do,” Jon blurted. Fuck. He hadn’t meant to be so blunt. Chalk it up to being bitten by the Christmas spirit.

I write to music. Sometimes it’s a movie, but most of the time I need tunes. These are the ones that inspired and were listened to while I wrote Pick Me Up, a Christmas Spirits story.

Nic needs a second chance and he’s hedging his bets on Jon.

I just really like this song and the sensualness of it lent itself to the story.

Who Wants to Live Forever by Queen

It’s Queen. It’s sad. It’s sweet. I cry with this one, but it fits how Nic feels.

Sympathy for the Devil – Motorhead cover

Nic’s dealt with his share of devils and has to come to terms with what he’s done.

Honestly, I just like this song. It didn’t inspire the story, but it kept coming up on my playlist. I love it.

Other songs that were on there and kept me going during the writing of the story:

Just What I Needed by the Cars – https://www.youtube.com/watch?v=Z5-rdr0qhWk

I Want You to Want Me by Cheap Trick – https://www.youtube.com/watch?v=BJs_L7yq5qE

Freak on a Leash by Korn – https://www.youtube.com/watch?v=jRGrNDV2mKc

In the End by Linkin Park – https://www.youtube.com/watch?v=eVTXPUF4Oz4

Eclectic grouping, isn’t it? That’s me, though. I don’t have many set playlists or specific ones for specific books. These are the songs that were on my lists during the writing of this book.